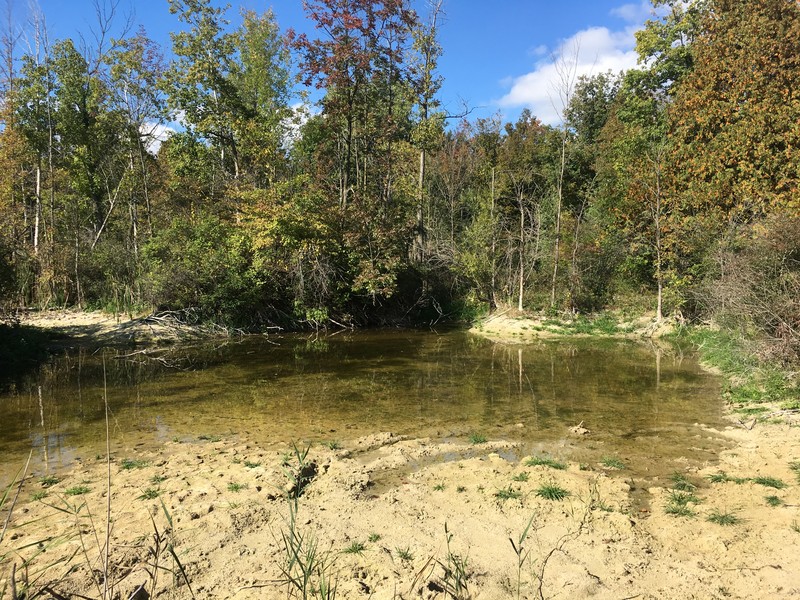 Large submerged mats of common stonewort (Chara sp.) can form in marl ponds. At first glance, Chara could be mistaken as a vascular flowering plant, but upon closer look you can see that it is a gray-green branched multicellular algae.

There are probably less than 10 occurrences statewide, and the total acreage is very small. One documented occurrence has good viability and protected on public land. This community is limited to the calcareous areas of the state where marl deposits form on the benthic substrate. The current trend of this community is probably stable for occurrences on protected land, or declining slightly elsewhere due to moderate threats related to development pressure, invasive aquatic plants, and alteration to the natural hydrology.

The number and acreage of marl ponds in New York have probably declined slightly or remained stable in recent decades as a result of alteration of natural hydrolgy, invasive species, and development.

The number and acreage of marl ponds in New York have probably declined moderately to substantially from historical numbers, likely correlated with the onset of agricultural and residential development.

Where practical, establish and maintain a natural buffer to reduce storm-water, pollution, and nutrient run-off, while simultaneously capturing sediments before they reach the pond. Buffer width should take into account the erodibility of the surrounding soils, slope steepness, and current land use. Wetlands protected under Article 24 are known as New York State "regulated" wetlands. The regulated area includes the wetlands themselves, as well as a protective buffer or "adjacent area" extending 100 feet landward of the wetland boundary (NYS DEC 1995). If possible, minimize the number and size of impervious surfaces in the surrounding landscape. Avoid habitat alteration within the pond and surrounding landscape. For example, roads and trails should be routed around ponds, and ideally not pass through the buffer area. If the pond must be crossed, then bridges and boardwalks are preferred over filling. Restore past impacts, such as removing obsolete impoundments and ditches in order to restore the natural hydrology. Prevent the spread of invasive exotic species into the pond through appropriate direct management, and by minimizing potential dispersal corridors, such as roads.

Consider how water flows around and into this pond community. Projects that occur near this community must consider the proximity of the development to this pond and the potential for changing how water flows, both above ground and below ground, into this waterbody. Impervious surfaces that rapidly divert water to the wetland should be avoided or minimized. Rapid influxes of surface water dilute the limey, mineral rich waters, decrease the robustness of the native marl pond species, and increase the likelihood of invasion by invasive aquatic plants.

Inventory known examples of marl pond and survey undocumented ponds adjacent to known occurrences of marl fen and marl pond shore. Need to inventory the plants and animls of all known marl ponds, including invertebrates and fish, needed to update the marl pond community description.

Confident identification of the characteristic marl pond species is needed, especially those involved in the photosynthetic precipitation of calcium carbonate, such as various algae including stoneworts (Chara sp.), mosses, cyanobacteria, and diatoms.

Currently known from Cortland, Livingston, and Seneca counties. The historical range is unknown; it is probably more widespread but always was spotty. No examples were found during an intensive study in the mid-1990s of the Adirondack Nature Conservancy (ANC) Chapter area including the most likely areas of marl such as the Great Lakes Plains of northwest Saint Lawrence County along the Saint Lawrence River and northeast Clinton County along Lake Champlain.

The aquatic community of a small, shallow spring-fed pond in which the water has a high concentration of calcium; as a result of chemical or photosynthetic removal of carbon dioxide from the water, the calcium precipitates out of the water as calcium carbonate (CaCO3). This calcium carbonate is deposited on the substrate, and forms a marl sediment. Marl is a white-colored precipitate that consists of calcium carbonate mixed with clay. Calcium carbonate levels are typically greater than 50 ppm. Stoneworts (Chara sp.), some other algae, cyanobacteria, and at least one species of moss (Didymodon tophaceus) can be involved in photosynthetic precipitation of calcium carbonate; stoneworts are usually abundant in marl ponds. Marl ponds have very low primary productivity and sparse growth of aquatic macrophytes. Characteristic vascular plants may include pondweeds (Stuckenia filiformis, Potamogeton strictifolius). Certain diatoms may be abundant, but low levels of available plant nutrients restrict growth of other algae and cyanobacteria. Characteristic plankton in nearby states includes calciphilic desmids, cladocerans (Holopedium spp.), and calciphilic rotifers (Brachionus spp.).

Look for marl deposits on the pond benthic substrate. Marl is a white-colored precipitate that consists of calcium carbonate mixed with clay. Stoneworts (Chara sp.) are typically the dominant submerged, non-vascular plant.

Known examples of this community have been found at elevations between 471 feet and 1,200 feet. 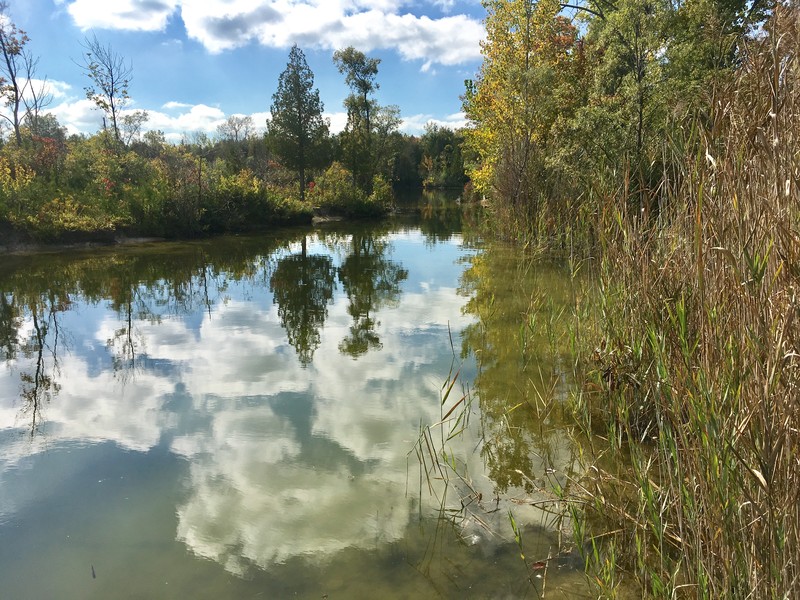 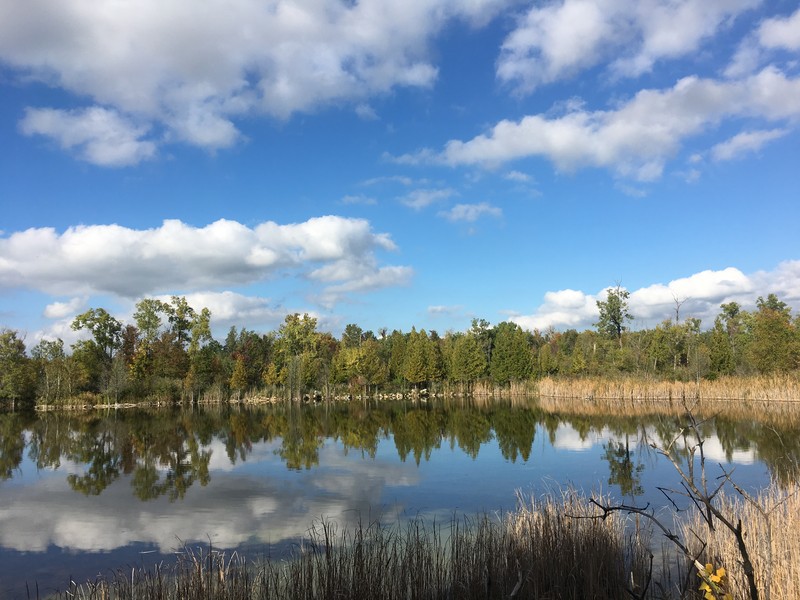 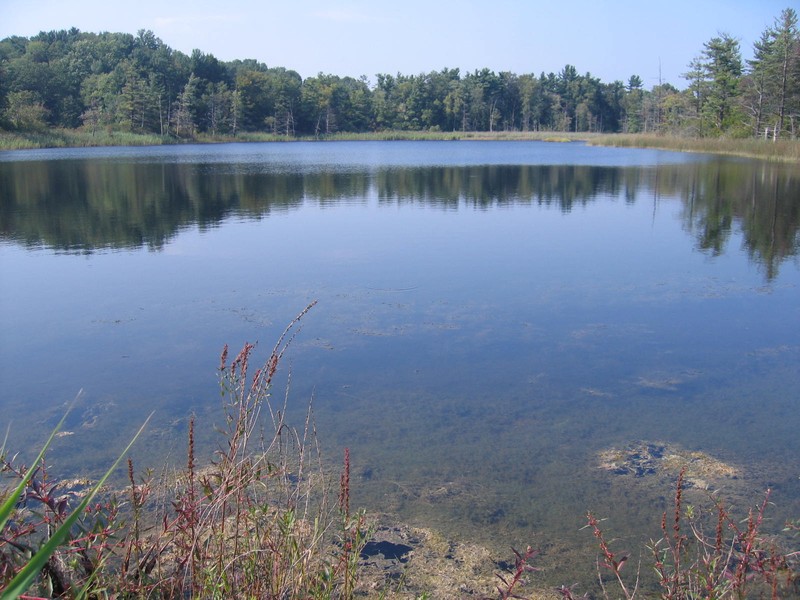 This figure helps visualize the structure and "look" or "feel" of a typical Marl Pond. Each bar represents the amount of "coverage" for all the species growing at that height. Because layers overlap (shrubs may grow under trees, for example), the shaded regions can add up to more than 100%.

Dudley, William R. 1886 The Cayuga flora. Part I: A catalogue of the Phaenogamia growing without cultivation in the Cayuga Lake basin. Andrus & Church, Ithaca, NY.

Smith, Henry P. 1885. History of Cortland County, with illustrations and biographical sketches of some of its prominent men and pioneers, edited by H. P. Smith. D. Mason & Co., Syracuse, NY.

Information for this guide was last updated on: April 19, 2019