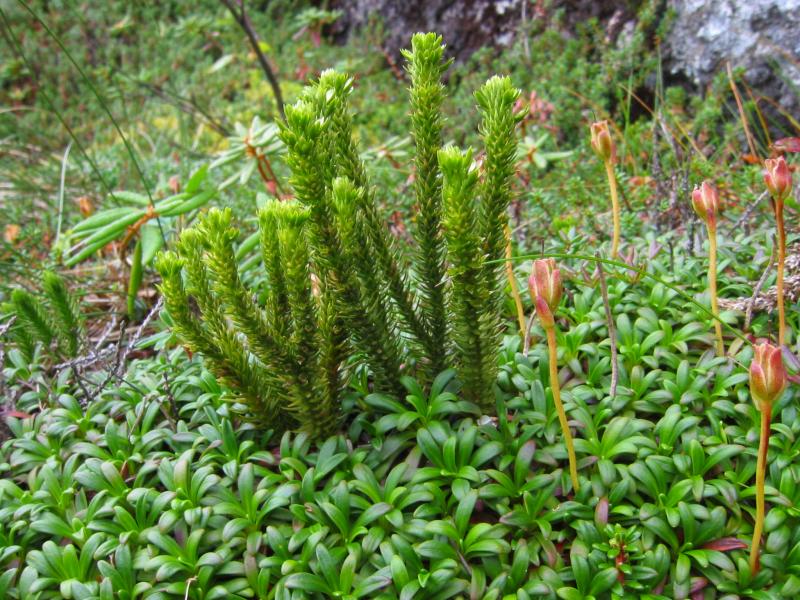 Applachian Firmoss and its close relatives grow only a few inches high, but fossils dating from before the evolution of flowering plants (about 160 million years ago) have revealed that the ancestors of modern clubmoss species grew to the size of our modern-day trees. Hybrids of Appalachian Firmoss with other closely related species are relatively common in certain parts of its range. This is probably the result of asexual propagules (gemmae) that help to maintain the hybrids even if the spores are not viable.

There are no populations which are known to have become extirpated. There are about three historical populations which have not been seen in recent years. One of these populations was searched for twice without success. Still, surveyors concluded that there is abundant habitat present, and further survey work is needed to determine if this population is still extant. The other historical populations also need to be searched for before a determination can be made on their condition. Population size varies considerably. Some have only 15 patches while others have 10's of thousands of individuals. Overall, long-term trends are unclear.

Many sites are threatened by trampling from hiker traffic, and one site from rock climbing activities, but the extent of the damage is not known. One site is potentially threatened by habitat succession.

All historical populations need further survey work to determine if they are still extant. Specimens and sites should be examined carefully for the hybrid taxon H. x josephbeitelii. The one population that is potentially threatened by habitat succession should be monitored on a relatively frequent basis to determine if management actions are needed. Other cliffs and alpine areas should be searched for additional populations.

In New York, this species occurs in alpine meadows, in openings or edges of krummholz, and on ledges and cracks in vertical cliffs. In alpine meadows it often occurs associated with exposed bedrock and cracks or crevices of rocks. The plants usually grow in exposed habitat on mosses or very thin soil or detritus over rock (New York Natural Heritage Program 2007). Exposed, harsh environments, such as cliff faces, talus slopes, and alpine summits (Haines 2003). Damp, acidic, igneous rocks in alpine zone or exposed cliffs and talus slopes elsewhere (Wagner and Beitel 2003).

Huperzia aprressa occurs in northeastern North America and perhaps Europe. In North America, it grows from Greenland south to Newfoundland, Labrador, New England, New York, and the mountains of the southern Appalachians including Virginia, North Carolina, Tennessee, and Georgia. It is also disjunct around Lake Superior in Ontario, Minnesota, and Michigan (Wagner and Beitel 1993).

Appalachian Firmoss is not a true moss as the common name implies. It is an evergreen, non-flowering vascular plant (or tracheophyte, reproducing by means of spores rather than seeds). Its stems occur in tufts and branch from the bases or from further up the stem. The stems are 6-10 cm tall and live for about 12-15 years before dying. The green to yellow-green leaves occur singly along the stems and are 2-6 mm long. The spore producing structures (sporagnia) are yellow, and occur in zones along the stems in the axils of the leaves. Asexual propagules, known as gemmae, are produced throughout the upper portion of the stems. These gemmae fall from the plants and start new individuals (Beitel and Mickel 1992, Wagner and Beitel 1993, Haines 2003).

The upper regions of the stems are 3-7 mm wide (incuding the leaves). The stems do not have winter bud constrictions and when they become 12-15 years old, the leaves turn yellow, senesce, and the whole plant dies. The leaves are entire, triangular to narrowly lanceolate, widest below the middle, and have stomates on both surfaces with 35-60 (per 1/2 leaf) on the adaxial surface. The lower leaves are longer (4-6 mm long) and more spreading (ascending to spreading) than the upper leaves which are 2-3.5 mm long and ascending to appressed. Plants growing in full sun have the leaves relatively shorter and more ascending than plants growing in shade. Gemmae are 3-4 mm long, 2.5-3.5 mm wide, their lateral lobes (leaves) are 0.5-1.1(-1.2) mm wide, and occur throughout the upper portion of the stems, rather than being restricted to distinct whorls at the apex of the annual growth.

Mature spores are needed to confidently distinguish this species from other closely related taxa including hybrids.

Huperzia selago is superficially similar although it does not grow in alpine settings. It can be distinguished by having gemmae produced in distinct single whorls at the apex of annual growth, lateral lobes (leaves) of gemmae 1.5-2.0 mm wide, and leaves from the upper and lower portions of the stems relatively more similar in length and orientation. Also, the shoots do not senesce, turn yellow, and die with age.

Huperzia lucidula is also superficially similar, but again does not grow in alpine settings and instead prefers cool moist forested habitat. It can be distinguished by its toothed leaves, widest above the middle, and by having stomates only on the abaxial surfaces. The gemmae are produced in distinct single whorls at the apex of annual growth, the lateral lobes (leaves) of gemmae are 1.5-2.5 mm wide, leaves from the upper and lower portions of the stems are relatively more similar in length and orientation, and obvious winter bud constrictions are present (represented by narrow zones of short ascending leaves). Also the shoots do not senesce, turn yellow, and die with age.

Huperzia x josephbeitellii, the hybrid between H. appressa and H. selago is similar to and is often found in the same alpine habitats as H. appressa. The hybrid is very similar to H. appressa plants that grow in the shade. Therefore, all specimens of H. appressa should be carefully compared to this hybrid. Huperzia x josephbeitellii can be distinguished by the production of abortive spores. Abortive spores are spores which are sunken or mis-shapen and have less luster than non-abortive spores. In the hybrid about 25-50% of the spores are abortive. Immature and spores from a previous season may appear abortive. Therefore, spores should only be assessed from plants late in their growing season (mid-August through October in New York). Huperzia x josephbeitellii is similar to H. appressa in that the gemmae are produced throughout the upper portions of the stems and leaves from the upper and lower portions of the stems are dis-similar in size and orientation. Characters that distinguish the hybrid from H. appressa are that the hybrid plants are more robust with the upper portions of the stems 7-10 mm wide (incuding the leaves) and the lateral lobes (leaves) of the gemmae are 1.1-1.5(-1.7) mm wide.

This species starts to have mature spores in late August and these remain in good shape through October. Therefore, since spore morphology is important in distinguishing this species from similar taxa, the best time to survey for this species is during this time period.

The time of year you would expect to find Mountain Firmoss vegetative and fruiting in New York.

Huperzia appressa has long been considered part of H. selago (Fernald 1970, Gleason and Cronquist 1991 as Lycopodium selago). Beitel and Mickel (1992) discuss the distinctiveness of H. appressa (as H. appalachiana) from H. selago and describe it as H. appalachiana. The older name H. appressa (Desv.) Löve & Löve takes priority. There are other closely related species known from boreal and arctic areas globally that may be found to be conspecific with H. appressa. It is possible that some of these taxa including H. appressa will need to be lumped under H. haleakalae, which is the oldest name for species in this complex (Haines 2003). The hybrid H. x josephbeitelii A. Haines (H. appressa x H. selago) is frequent on some mountain peaks in New England and is documented from Newfoundland, Ontario, and Quebec (Haines 2003). It is known from where the two parental species overlap in the northern Appalachians and the north shore of Lake Ontario (Beitel and Mickel 1993). It has not been documented from New York but since the two parental species overlap slightly in New York, it may occur here. The genus Huperzia has long been considered part of Lycopodium. Wagner and Beitel (1993) maintain it at the genus level because of the complex and specialized shoots, gemmiferous branchlets and gemmae, and the unbranched gametophytes.

Haines, A. 2003. The families Huperizaceae and Lycopodiaceae of New England: a taxonomic and ecological reference. V.F. Thomas Co., Bowdoin, ME.

Beitel, J.M. and J.T. Mickel. 1992. The Appalachian Firmoss, a New Species in the Huperzia selago (Lycopodiaceae) Complex in Eastern North America, with a New Combination for the Western Firmoss. American Fern Journal 82: 41-46.