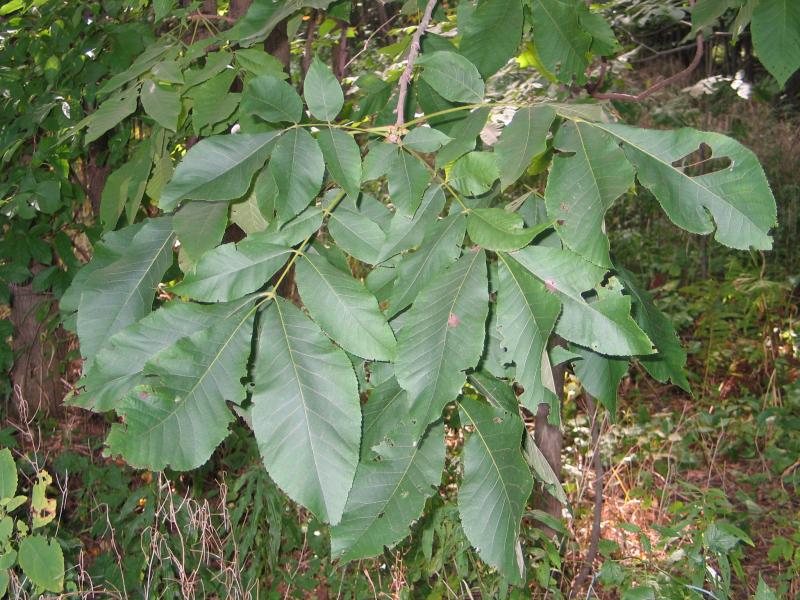 The edible nuts of the big shellbark hickory are the largest of any hickory. They are valuable food for many wild mammals, ducks, quail and turkeys. The nuts can be collected and eaten raw or used in desserts.

Many new occurrences have been found in the last 20 years and six of the 12 historical records have been relocated.

Recent work by Erik Danielsen and Aaron Heminway in Western NY revealed more extant populations than previously known; This may reflect increased survey effort rather than actual increase, however the species does not appear to be in decline as previously thought.

As a floodplain tree, some populations were likely lost or severely reduced as these floodplains were converted to agricultural lands or subjected to permanent flooding through dam creations. Today, this is not as much of a threat. Some of the larger trees may be subject to timber activites, but selective cutting should allow young individuals to remain and maintain species recruitment. Dense coverage of aggressive non-native plants within the floodplain could limit recruitment.

A forest buffer should be provided along the floodplains where these trees occur. Natural flooding regimes should be maintained.

A tree typically found in the rich alluvium of floodplains, but also in rich mesic soil along riverbanks and marshes. In some areas it can form pure stands, but usually is mixed with other floodplain species (New York Natural Heritage Program 2005). Moist, rich bottomlands and floodplains (Rhoads and Block 2000). Rich bottomlands, along creeks, and in open cedar glades (Flora of North America 1997). Flood plains (Gleason and Cronquist 1991). Riverbanks and rich floodplain woods (Voss 1985). Rich woods and bottoms (Fernald 1970).

This wetland tree has a discontinuous distribution across the state. Most of our populations are within the glaciated areas of central and western New York, but it is also found near the coast in southeastern New York.

The tree ranges from New York west through southern Ontario, southern Michigan, and southeastern Nebraska, south to eastern Kansas, eastern Oklahoma, Mississippi, Alabama, northern Georgia, and northern North Carolina. It is also planted within and outside of this native range.

Big shellbark hickory can grow to be a large tree more than 100 feet tall. The trunk is usually straight and free of branches in the lower half. The crown is oblong to rounded. The bark is light to dark gray and peels off in long shaggy strips like shagbark hickory. The twigs are stout, orange-brown, and have large, dark brown, hairy, winter buds that turn yellow in the spring. The leaves are alternate and compound with seven leaflets but sometimes have as few as five or up to nine leaflets. The three leaflets at the end are larger than the ones below. The edges of the leaves are toothed and without hairs at the tip of the teeth. The male flowers are on long, stalked, dangling catkins in clusters of three. There are 2-5 female flowers on short stalks at the ends of the new branches. These flowers produce the large, rounded, brownish yellow fruits up to 2 1/4 inches in diameter which are usually flattened at the top. The husk easily splits open to reveal a hard, round, flattened nut that is pointed at both ends and up to 2 inches long. The shell is very hard and thick and the kernel is sweet.

Carya laciniosa has larger fruits than the other hickories, with nuts typically 3-6 cm long. This tree may grow to more than 40 meters tall. The shaggy light gray bark separates into large, thick, broad plates. The first year branchlets are orange-brown to light tan, and often hairy but these hairs fall off with age. The large buds have glabrous scales. There are 7-9 leaflets that are 10-25 cm long and 7-13 cm wide. These leaflets have an acuminate leaf tip and are covered with soft hairs on the underside. The tips of the leaf teeth do not have dense tufts of hair. The nut is 4-6 angled and 3-6 cm long, with a yellowish-brown to reddish-brown shell. The nut is edible.

The key to identifying this species is by collecting the nuts. There should be old nuts on the ground throughout the year. A habitat description will also be very helpful.

Most hickory trees have nuts that range in size from 1-3 cm, compared to the 3-6 cm size found on big shellbark hickory. Many of the other New York hickories are more of an upland tree. You might encounter Carya ovata and Carya cordiformis on a floodplain but only Carya ovata has shaggy bark. Carya cordiformis has thin flat bark with fissures and a distinctive sulfur bud. Its nuts are thin shelled and bitter. Carya ovata has 5-7 leaflets that are glabrous underneath or only with a few scattered hairs. The margins have numerous hairs however. Its nuts are thin shelled and sweet. Carya tomentosa also has large buds and 7-9 leaflets, but it is typically restricted to upland sites, has a more rounded fruit, and the nuts are smaller (1.5-3 cm). It also lacks shaggy bark.

This tree is obviously visible year-round, but the leaves begin to emerge mid-May and persist until mid-fall. The flowers appear mid-May to early June and fruits develop shortly afterward. Mature fruit are probably not present until early August, but these persist on the trees until a few hard frosts. Fruit from previous years will likely be scattered on the ground and located just below the leaf litter. Surveys may be conducted at any point during the growing season.

The time of year you would expect to find Big Shellbark Hickory vegetative, flowering, and fruiting in New York. 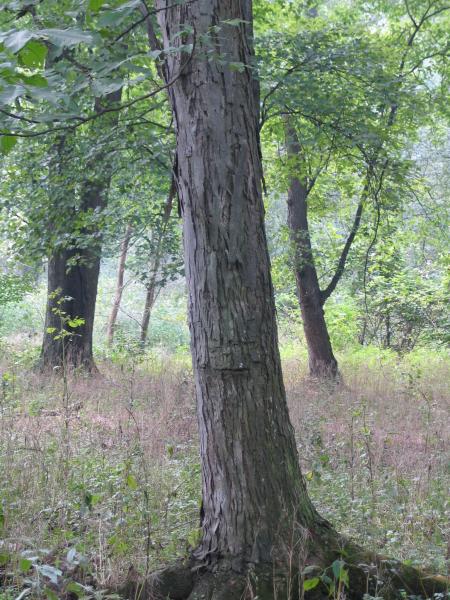 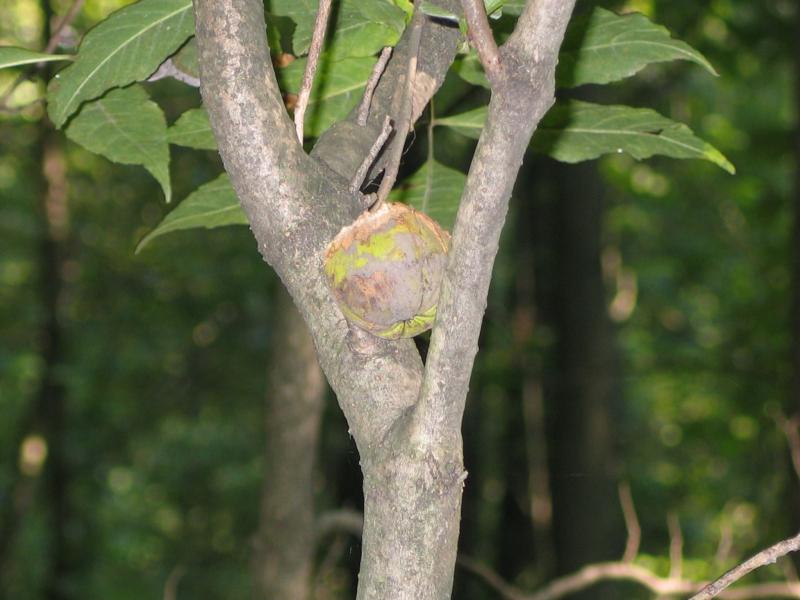