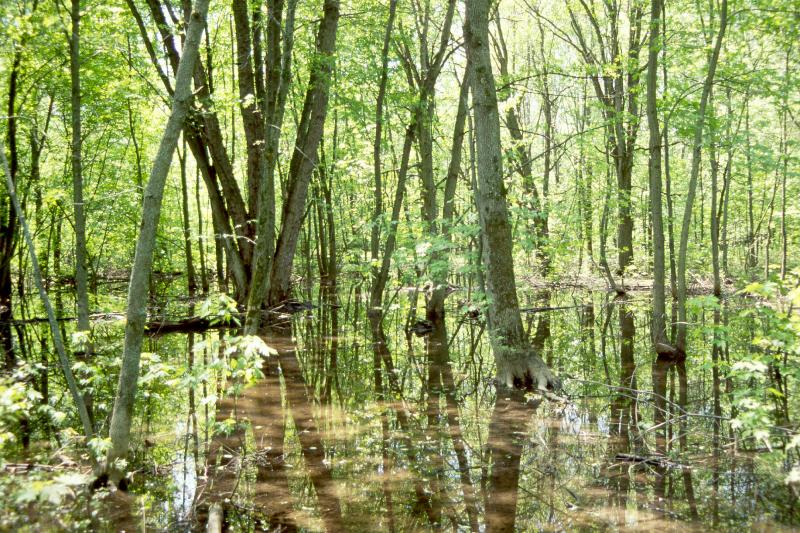 There are about a thousand occurrences statewide. Some of the documented occurrences have good viability and many are protected on public land or private conservation land. This community is limited in distribution to the central and western parts of the state, and includes a few large, high quality examples. The current trend of this community is probably stable for occurrences on public land, or declining slightly elsewhere due to moderate threats that include alteration of the natural hydrology and invasive species.

The number and acreage of silver maple-ash swamps in New York have probably declined slightly, or have remained stable, in recent decades as a result of wetland protection regulations.

The number and acreage of silver maple-ash swamps in New York have probably declined substantially from historical numbers, likely correlated with agricultural and other development. Several occurrences were likely converted to open wetland types, such as shallow and deep emergent marsh, by flooding.

Where practical, establish and maintain a natural wetland buffer to reduce storm-water, pollution, and nutrient run-off, while simultaneously capturing sediments before they reach the wetland. Buffer width should take into account the erodibility of the surrounding soils, slope steepness, and current land use. Wetlands protected under Article 24 are known as New York State "regulated" wetlands. The regulated area includes the wetlands themselves, as well as a protective buffer or "adjacent area" extending 100 feet landward of the wetland boundary (NYS DEC 1995). If possible, minimize the number and size of impervious surfaces in the surrounding landscape. Avoid habitat alteration within the wetland and surrounding landscape. For example, roads and trails should be routed around wetlands, and they should ideally not pass through the buffer area. If the wetland must be crossed, then bridges and boardwalks are preferred over filling. Restore silver maple-ash swamps affected by unnatural disturbance (e.g., remove obsolete impoundments and ditches in order to restore the natural hydrology). Prevent the spread of invasive exotic species into the wetland through appropriate direct management, and by minimizing potential dispersal corridors, such as roads.

Research the composition of silver maple-ash swamps statewide in order to clearly separate this community from silver maple-dominated floodplain forests. Collect sufficient plot data to support the recognition of an ash-dominated swamp with no silver maple as a potentially new community type.

This community is primarily limited to the lowlands of central and western New York. It is concentrated in the Great Lakes and High Allegheny Plateau Ecoregions, including the Saint Lawrence Lowlands, especially the southwest portion, and the Lake Champlain Lowlands, especially the northern portion where it approaches large patch size. It is essentially absent from the Northern Appalachians Ecoregion. It is suspected to be peripheral and very uncommon in the Lower New England Ecoregion, and probably only at the northern portion of the ecoregion in Columbia County and northward.

This community is suspected to be widespread throughout the lowlands of the Great Lakes and the High Allegheny Plateau. This range is estimated to span north to Ontario, west to Wisconsin, south to Tennessee and West Virginia, and east to Vermont.

Silver maple-ash swamps are hardwood basin swamps that occur in poorly-drained depressions or on poorly-drained soils along the borders of large lakes or, less frequently, rivers. The sites are characterized by uniformly wet conditions, with minimal seasonal fluctuation in water levels. The tree canopy is dominated by silver maple (Acer saccharinum) and green ash (Fraxinus pennsylvanica), but typically includes a variety of other hardwood species such as American elm (Ulmus americana), red maple (Acer rubrum), swamp white oak (Quercus bicolor), and ironwood (Carpinus caroliniana). This community has a well-developed understory of tall shrub, short shrub, and herbaceous species. Silver maple-ash swamps often occur over calcareous bedrock, and the plant species composition may reflect this influence with the presence of calciphiles such as northern white cedar (Thuja occidentalis) and alder-leaf buckthorn (Rhamnus alnifolia) (Edinger et al. 2002).

A closed-canopy hardwood swamp within a basin, with a canopy dominated by silver maple and green ash. A diverse suite of canopy, shrub, and herbaceous species are also associated with this community.

Known examples of this community have been found at elevations between 95 feet and 1,100 feet.

During the summer, silver maple-ash communities are lush with vegetation, including ferns, tall shrubs, and a large variety of herbaceous species. Beautiful blueflag iris (Iris versicolor) blooms early in the summer, and eye-catching spotted jewelweed (Impatiens capensis) blooms mid to late summer. During the fall, this community becomes very scenic as the canopy species change color. 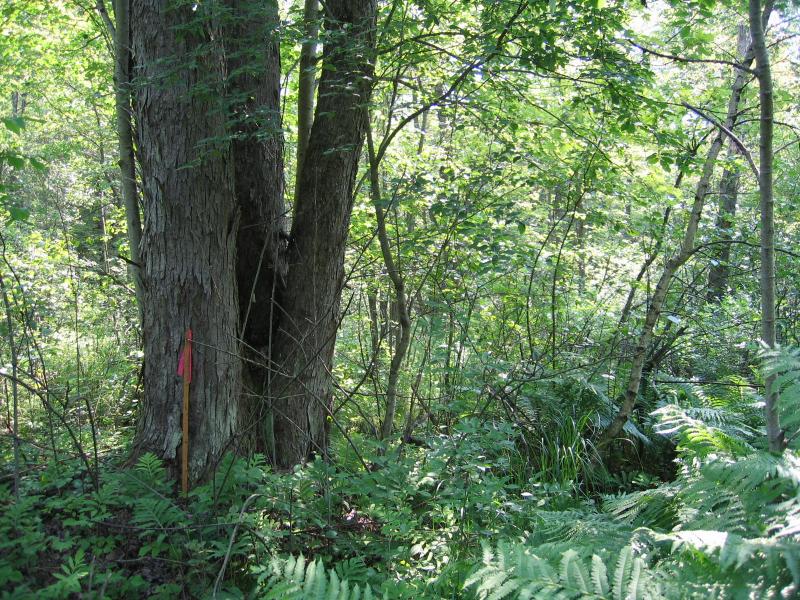 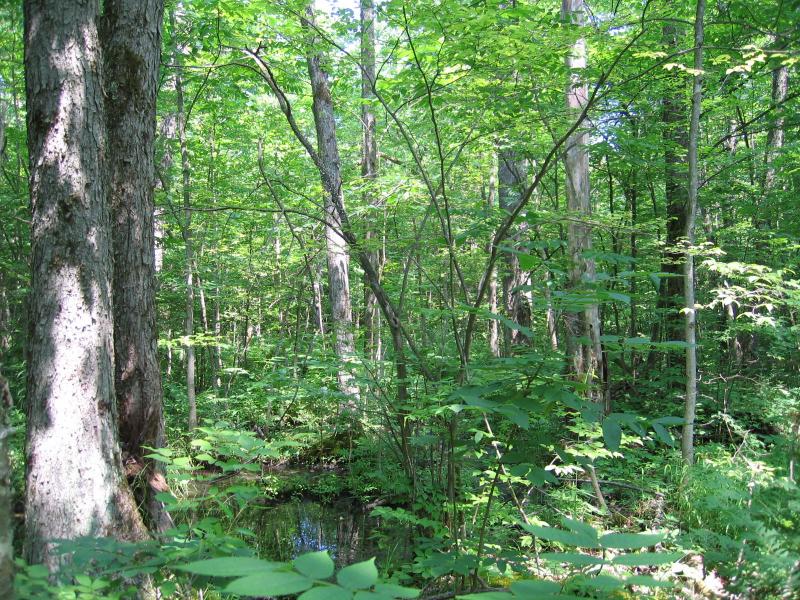 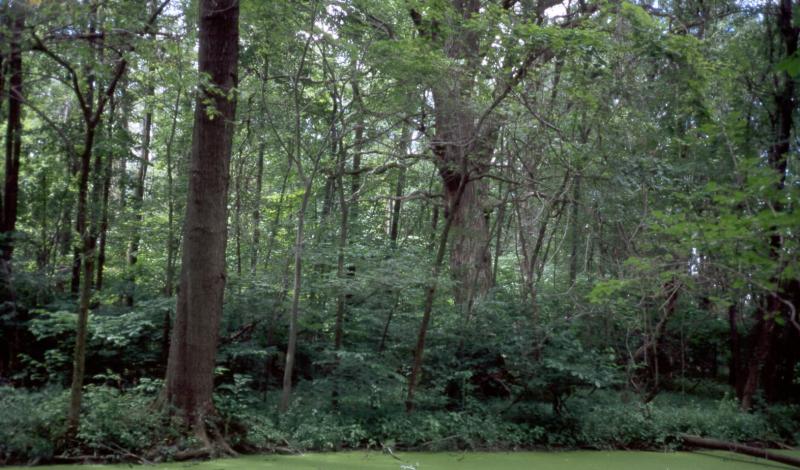 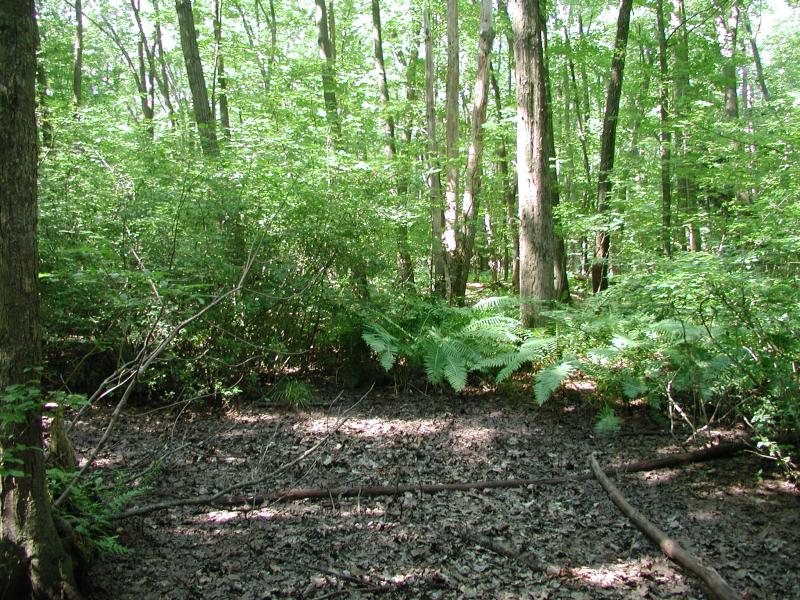 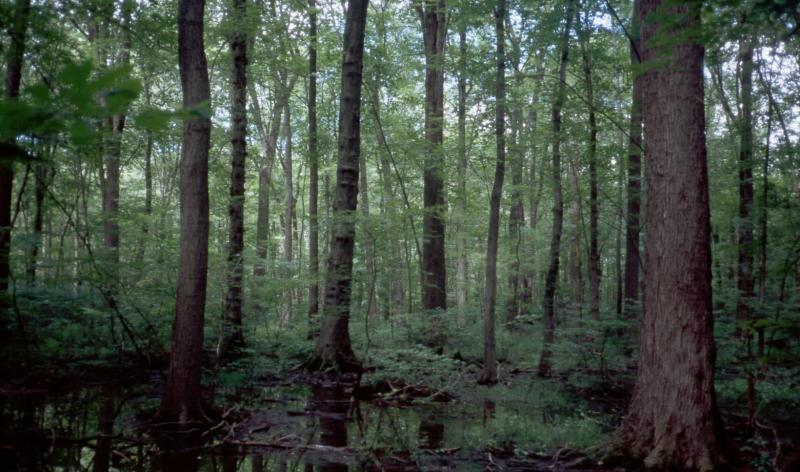 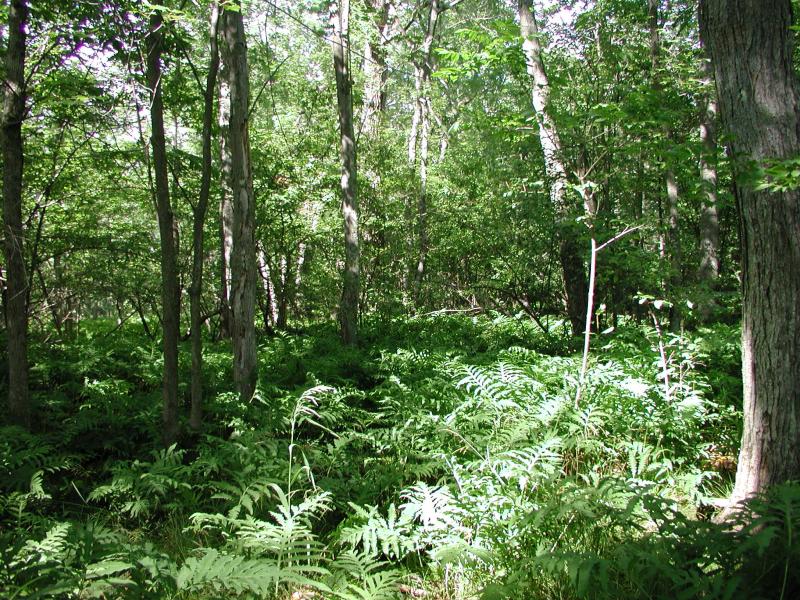 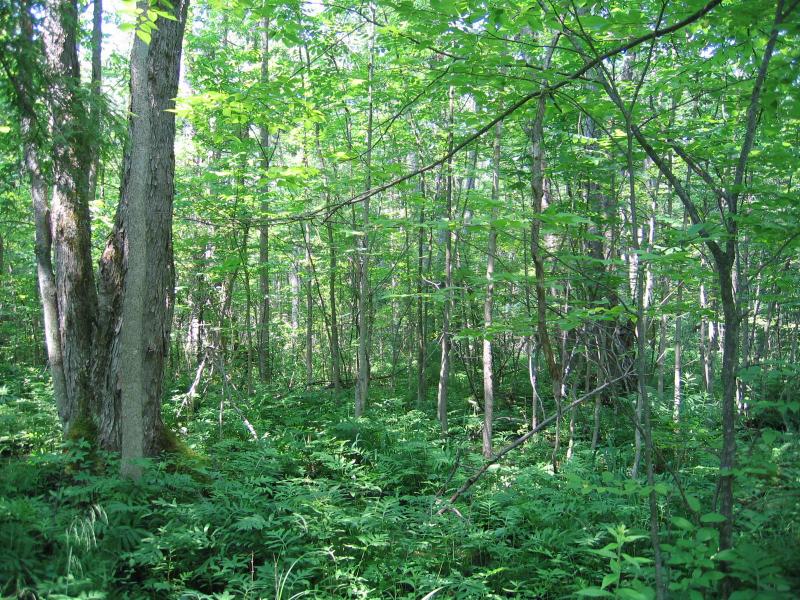 This figure helps visualize the structure and "look" or "feel" of a typical Silver Maple-Ash Swamp. Each bar represents the amount of "coverage" for all the species growing at that height. Because layers overlap (shrubs may grow under trees, for example), the shaded regions can add up to more than 100%.