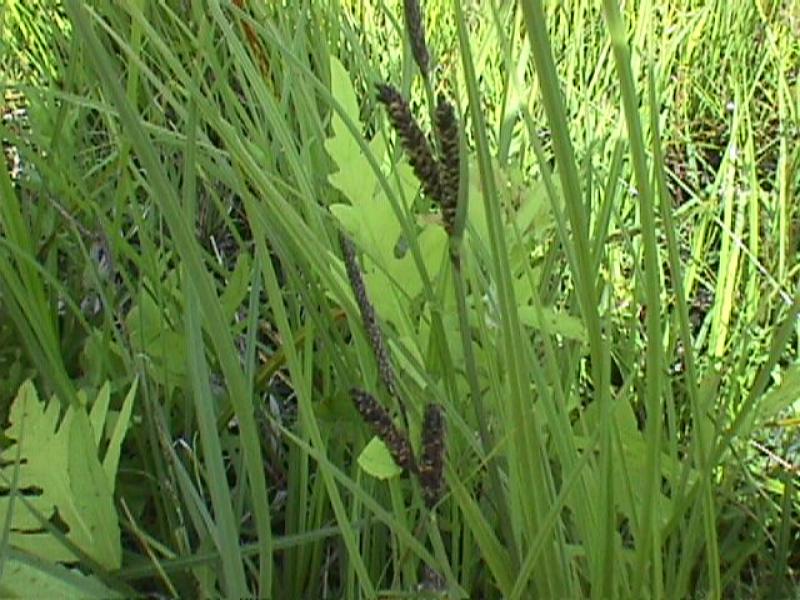 The specific epithet nigra means black and is probably in reference to the dark purple-brown to black pistillate scales and occasionally black apices of the perigynia.

There is a single, recently discovered extant population, and only one other voucher specimen. About a half-dozen unvouchered reports have been made, but nothing more recent than the early 1900s. Southern New England has apparently experience a significant decline of Carex nigra populations due to land-use changes. The same appears to be true within New York. More survey work is needed at the sites where it was previously reported, as well as other sites that seem to have suitable habitat.

Carex nigra was rediscovered in Warren County in 2007. Previous to that it was known only from historical records.  So the short-term trend is increasing... but based on very minimal data.

There is only one known extant population, and all historical populations except one are based on reports only. One historical population is documented by a voucher specimen. The locality information for this specimen is quite general and relocation of this population has so far not been successful. In southern New England, C. nigra appears to be declining in abundance due to a loss of wet fields and pastures (Standley et al. 2002). Overall, long term trends in New York are not known but may indicate that this species is declining.

No threats are currently known for Carex nigra in New York.

Additional effort should be put into searching for historical populations. Since the locality information for these populations is not precise searches will be difficult.

Carex nigra is currently known from one population in Warren County. There are also a few scattered historical populations from the northern parts of central and western New York as well as eastern New York. All of these populations except one from Dutchess County in eastern New York, are from unvouchered reports. New York is at the southern edge of its range.

Carex nigra occurs in North America, Europe and western Asia. In North America it occurs from Greenland south to Newfoundland, Maine, and Connecticut west to New York, and Quebec. It is also disjunct in Michigan and may be waif at this site (Voss 1972, Standley et al. 2002).

Black sedge is a grass-like perennial with long rhizomes and grows in patches. The bases of the plants are red-brown. Leaves are strap-like and 2.0-4.5 mm wide. Its stems are not clustered and are 10-110 cm long. Three to five narrowly cylindrical clusters of flowers/fruits (spikes) occur along and at the apex of the stems. The lower two to four spikes contain female flowers which mature into fruits. The upper one to two spikes are composed of male flowers. Fruits (perigynia) are 2.0-3.7 mm long (Standley et al. 2002).

Carex nigra is a long rhizomatous colonial perennial. Leaf sheaths are glabrous (at least the proximal ones) and do not become ladder-fibrillose. The basal sheaths are red-brown. Culms are scabrous and 10-110 cm long although they are usually on the short end of this range. Proximal bracts extend to approximately the top of the inflorescences. There are 2-4 lateral erect pistillate spikes 1.2-4.2 cm long and 1-2 terminal staminate spikes. Pistillate scales are dark purple-brown to black often with a slender green mid-stripe. Perigynia are 2.0-3.7 mm long and have a minute beak 0.1-0.2 mm long (Standley et al. 2002).

It is easiest to identify Carex nigra when it has almost mature to mature perigynia. Full plants including basal leaves are helpful for identification and should be collected.

Carex nigra is a fairly distinctive species and should not be easily confused with other species. The dark pistillate scales, bracts equal to inflorescences, and colonial habit are helpful characters to distinguish C. nigra.

The time of year you would expect to find Black Sedge fruiting in New York. 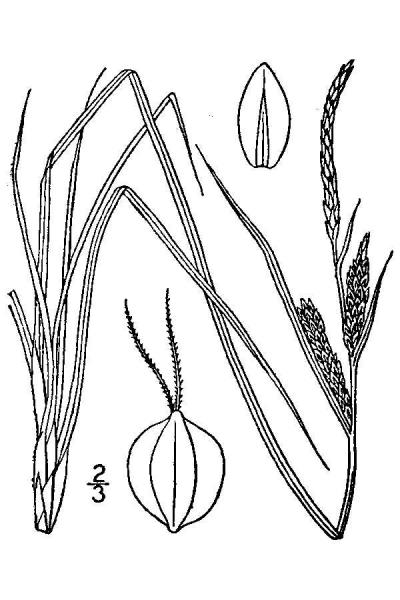 Carex nigra is currently placed in section Phacocystis. It was formerly placed in section Acutae but the latter group is no longer considered distinct. Carex nigra is a member of the C. acuta group which includes C. lenticularis. Carex nigra can be variable but currently it is not separable into distinct taxa. Carex nigra is known to hybridize with a few other members of section Phacocystis including C. stricta, C. aquatalis, and C. paleacea. Carex recta is the stabilized hybrid between C. nigra and C. paleacea. It is not known from New York (Standley et al. 2002).