The large cranberry (Vaccinium marcrocarpon) found in maritime freshwater interdunal swales is more commonly associated with bogs in New York. It is the same cranberry that is commerically produced for fruit and juice and is used in medical research. The plant is considered a shrub but creeps along the ground, seeming more like a small vine, and has small evergreen leaves. Commercial cranberry beds and maritime interdunal swales are both flooded seasonally, though swales are flooded more irregularly and unpredictably.

There are approximately 20 extant occurrences statewide. The several documented occurrences are small and geographically restricted, but they have good viability and are protected on public or private conservation land. The community is restricted to the Coastal Lowlands ecozone in Suffolk County. The community's trend is declining due to threats related to invasive species, such as common reed (Phragmites australis); groundwater contamination; off-road vehicle abuse; and management practices that alter natural hydrologic processes, such as breach contingency plans. The surrounding landscape is vulnerable to exotic flora invasion and urban development.

Community viability/ecological integrity and area of occupancy is suspected to be slowly declining, primarily due to community conversion (from maritime freshwater interdunal swales to common reed marsh) after invasive species encroachment. Other factors in the decline include anthropogenic alterations (both physical and hydrological) to dune and swale dynamics (e.g., ATV use, beach replenishment, dune stabilization) and coastal development (e.g., groundwater contamination, filling, road construction, and community destruction).

The number, extent, and viability of maritime freshwater interdunal swales in New York are suspected to have declined substantially over the long-term. These declines are likely correlated with coastal development and associated changes in hydrology, water quality, and natural processes.

The main threats to maritime freshwater interdunal swales include common reed (Phragmites australis) invasion, ORV abuse, groundwater contamination, and development activities. Deregulation of isolated wetlands, which include maritime freshwater interdunal swales, is another recent threat. In 2001, the United States Supreme Court ruled that Section 404 of the Clean Water Act did not grant the U.S. Army Corps of Engineers (US ACoE) the authority to regulate the filling of isolated wetlands. This decision led U.S. Enironmental Protection Agency and US ACoE officials to issue guidance in January 2003 that made it more difficult for regulators to protect isolated wetlands (Comer et al. 2005).

Monitor the abundance of common reed (Phragmites australis) in this community and, as needed, control its encroachment. Maintain dynamic beach and dune processes, including allowing dunes to be breached and overwashed by storm events. Minimize breach closure, groundwater pollution, and road fill. Where practical, establish and maintain a natural wetland buffer to reduce stormwater, pollution, and nutrient run-off, while simultaneously capturing sediments before they reach the wetland. Buffer width should take into account the erodibility of the surrounding soils, slope steepness, and current land use. Wetlands protected under the Freshwater Wetlands Act (Article 24 of the Environmental Conservation Law) are known as New York State "regulated" wetlands. The regulated area includes the wetlands themselves as well as a protective buffer or "adjacent area" extending 100 feet landward of the wetland boundary (NYS DEC 1995). If possible, minimize the number and size of impervious surfaces in the surrounding landscape. Avoid habitat alteration within the wetland and surrounding landscape. For example, roads and trails should be routed around wetlands, and ideally not pass through the buffer area. If the wetland must be crossed, then bridges and boardwalks are preferred over filling. Restore past impacts, such as removing obsolete impoundments and ditches in order to restore the natural hydrology. Prevent the spread of invasive exotic species into the wetland through appropriate direct management and by minimizing potential dispersal corridors, such as roads.

Survey and compile existing data on the Fire Island occurrences. Searches for additional occurrences and data on characteristic animals are also needed.

Establish predictive models of dune dynamics and groundwater hydrology to determine where additional patches of this community may arise spontaneously.

Maritime freshwater interdunal swales are restricted to the Coastal Lowlands ecozone in Suffolk County. They are primarily found on the southern coasts of Long Island and Fire Island; there are smaller examples in the Peconic Bay and along the North Fork of Long Island. New York is in the central part of the range from New England south to at least New Jersey.

This community is confined to major dune systems of the northeastern coast (over an estimated 350 square km). Most occurrences are found in Massachusetts, New York, and New Jersey, with occasional occurrences in Rhode Island and Delaware. There is one degraded occurrence in New Hampshire. There are no known occurrences in Connecticut (NatureServe 2009).

A mosaic of wetlands that occur in low areas between dunes along the Atlantic coast; the low areas or swales are formed either by blowouts in the dunes that lower the soil surface to groundwater level, or by the seaward extension of dune fields. Soils are either sand or peaty sand; water levels fluctuate seasonally and annually, reflecting changes in groundwater levels. The dominant species are sedges and herbs; low shrubs are usually present, but they are never dominant. These wetlands may be quite small (less than 0.25 acre or 0.1 ha); species diversity is usually low. The composition may be quite variable between different interdunal swales.

Known examples of this community have been found at elevations between 5 feet and 15 feet.

The grasses, sedges, and rushes that characterize the flora of this community bloom in mid- to late summer. Some of the showy associated species (the carnivorous sundews and bladderworts, cranberries and yellow-eyed grass) come into flower earlier, but a late-season visitor may be rewarded with a crop of ripe cranberries. 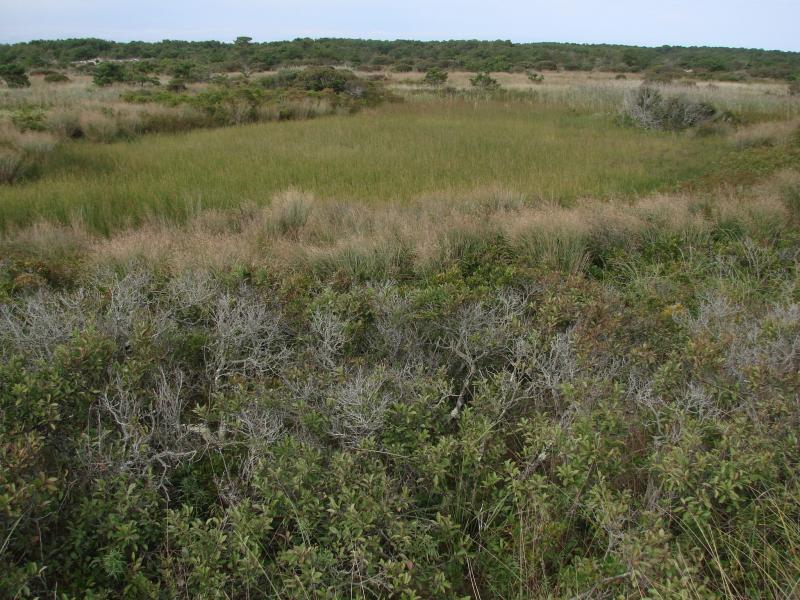 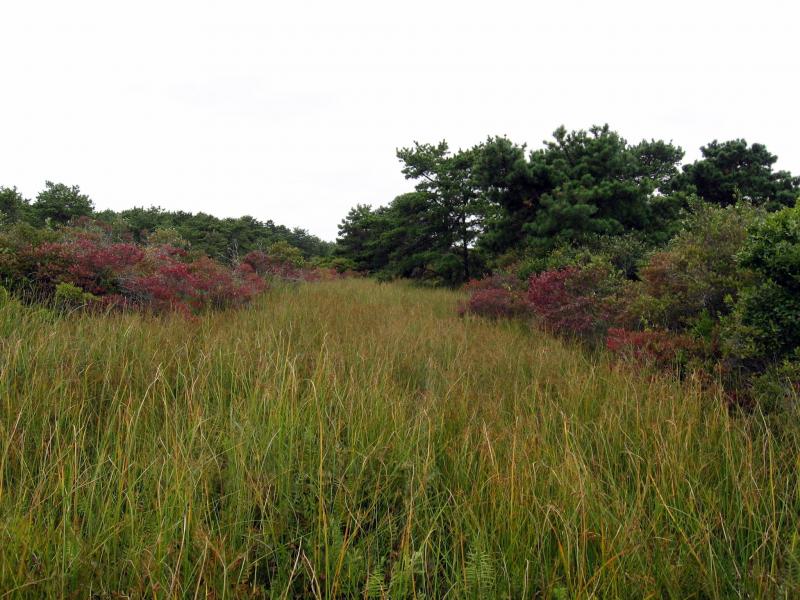 This figure helps visualize the structure and "look" or "feel" of a typical Maritime Freshwater Interdunal Swales. Each bar represents the amount of "coverage" for all the species growing at that height. Because layers overlap (shrubs may grow under trees, for example), the shaded regions can add up to more than 100%.