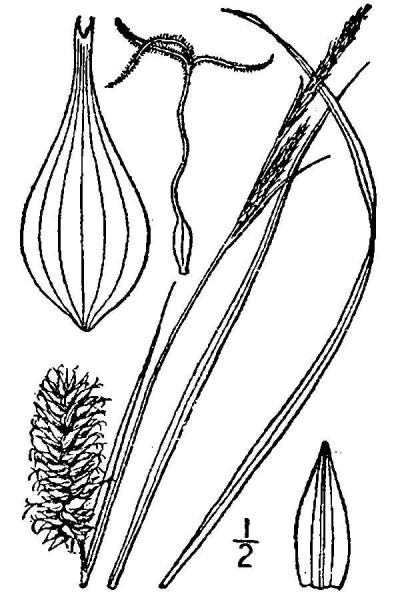 The species name is derived from the Latin "bullatus" which mean inflated and refers to the inflated perigynia of the spike (Fernald 1950). After its discovery in New York in 1894 it was collected many times on Long Island through 1929. There were no subsequent collections for 30 years until Stanley Smith of the NY State Museum collected it again in 1959 after its habitat had been severely reduced by development.

There are four existing populations with substantial numbers of plants. There are 17 populations documented from the late 1800s and early 1900s that have not been resurveyed and eight populations, mainly from western Long Island, that are now considered extirpated.

All populations have been visited at least twice and their numbers are stable.

All populations need to be protected from direct human disturbance and the misuse of herbicides. The immediate habitat needs to be maintained in an early successional stage to prevent the plants from being shaded out by woody plants.

Research is needed to find the best management tool besides fire that can protect and augment populations.

This sedge is most common on the south side of Long Island, but there are disjunct historical collections from the Hudson Highlands and Central and Western New York.

Carex bullata ranges mainly along the coastal plain from Maine to Virginia but also found inland in scattered populations from Maine south to Georgia and west to Tennessee Arkansas and Mississippi.

Button sedge is a grass-like perennial which grows from long rhizomes. The leaves are 1.8 to 4.3 mm wide, flat or "w-shaped" in cross-section, with purplish-red basal sheaths. The infloresence has 1 to 3 staminate spikes on top, with 1 to 3 lower pistillate spikes, and is subtended by a leafy bract as long or longer than the infloresence. The pistillate scales are awnless and shorter than the fruit (perigynia). The perigynia are 5.9 to 10.2 mm long, scabrous near the tip, contracting into a narrow beak, the beak itself 2.4 to 4.2 mm long and toothed. The perigynia contain 3-sided achenes which are brown, smooth and with 3 stigmas (FNA 2002).

Fruit is needed for a positive identification.

Carex bullata flowers in May and fruits persist on the plant until the first frost.

The time of year you would expect to find Button Sedge fruiting in New York.