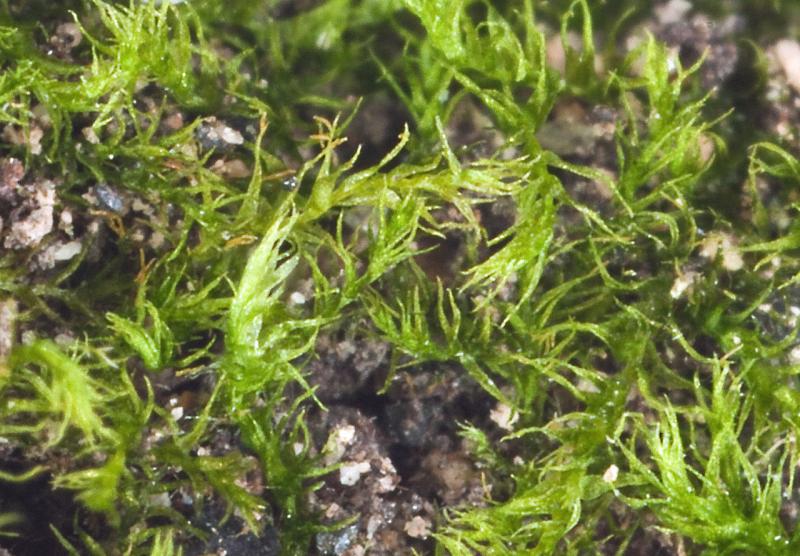 This moss has been put under various genera over time including Amblystegium, Rhynchostegiella, Hypnum, and Stereodon. The genus was named by Harold Robinson of the Smithsonian Institution to honor Henry Shoemaker Conard, a noted bryologist and environmental preservationist from Pennsylvania and later Grinnell College in Iowa (Robinson 1976). Dr. Conard was the author of the widely used book "How to Know the Mosses and Liverworts" (Wikipedia contributors).

The rank was confirmed to be S1 based on Cleavitt et al.'s (2006) report. Three specimens were verified. The last collection was made in 2005.

The short term trend appears stable three sites have been verified as extant and sampled in 2005.

The long term trend may be stable, three extant sites have been relatively recently surveyed. Resurveys are needed to confirm this trend.

Over collection and human disturbance at sites accessible to visitation are the primary threats.

Monitor the populations for impacts from human disturbance and collecting. Control any invasive exotic plants infesting the cliff-faces where this moss occurs.

No reserach needs have been identified.

In New York, this moss has been found on a seepy north facing talus slope, on calcareous cliffs of a gorge trail, and on calcareous outcrops beside a river (New York Natural Heritage Program 2015). Damp cliffs, limestone, swamps, stumps, humus, bark at the base of trees (FNA 2014).

New York is along the eastern edge of this species' range in North America. This moss has been collected in central and western New York at three locations in Tompkins and Wyoming counties.

This moss is distributed widely in the Northern Hemisphere including northern and central Europe, Iceland and Kashmir in Asia. In North America it has been found in Guatemala, in all the Canadian Provinces except New Brunswick and Prince Edward Island. It occurs widely in the western and northern continental United States from New Mexico to California and Utah, east through the plains, Iowa and Texas, the northern rockies, spannig the northern Great Lakes states to Pennsylvania and New York, and south to Missouri, Arkansas, West Virginia and Virginia.

Conardia compacta is a small (ocassionally minute), very slender and irregularly branched moss, with narrow leaves that are spearhead- to broadly spearhead-shaped. Its stems are erect ascending or creeping and form soft, thin mats. The stem bases and branch buds have clusters resembling tiny filaments or leaf-like structures. The leaves are 0.6 to 1.2 mm long, typically crowded and have a long, slender tip which is variously curved or spreading, sometimes in different directions, often giving patches a rather crinkly appearance. The thickened leaf midrib (costa) bears minute, cylindric, solid vegetative propagules (gemmae) or slender filaments (rhizoid) on its outer (abaxial) surface. Aside from the midrib the leaf cells are 5 to 9 times longer than wide, but become shorter and broader (square or rectangular) in the alar region (area controling the leaf orientation in response to changes in moisture) of the leaf base On dry specimans the leaves often all point in the same direction (homoallous). The midrib (costa) extends nearly to the leaf tip, but this is not easy to see in the field because the plants are so small. The mouth of the spore case (capsule) has 1 to 2 rows of enlarged specialized elastic separating cells. Inside the mouth the outer row(s) of the teeth are lanceolate, brownish yellow, with either net-veined, net-veined and marked with fine, longitudinal lines or ridges, or with portions bearing delicate lines or ridges at their base and usually forked towards their tip. The inner row of teeth bear typically 1 to 2 cilia, which are half as long as the segments they alternate with. The capsule lid (operculum) is conicial to short beaked. The spores are covered with fine nipple-shaped projections (papillose). When it is present a particularly useful character to distinguish C. compacta is the growth of rhizoids from the back of the midrib. Pale, elongated gemmae sometimes grow from the back of the leaf tip, but these are rarely detectable in the field. (BFNA 2010)

Positive identification of Conardia compacta requires only a small amount of the gametophyte (vegetative) plant that includes the stem, stem base and stem leaves.

Conardia has the appearance of a small Amblystegium species moss, but can be distinguished from this and other similar species by its warty-rough bumped (papillose), much branched, slender filaments (rhizoids) that are frequently inserted on the back of the midrib (costa) or near the leaf apex. Rhizoids can mostly be found in the basal portions of at least some shoots. In addition, the upper (distal) parts of the axillary hairs consist of 1 to 4 cells that are shorter and broader rather than the 1--2 narrow and delicate ones found in Amblystegium. The capsule is only slightly bent in a bow like curve (arcuate) rather than curved throughout as in Amblystegium species. (BFNA 2010)

The gametophyte (vegetative) form of this moss may be seen throughout the year. No information was found of the timing of capsule maturation.

The time of year you would expect to find Coast creeping moss vegetative in New York.