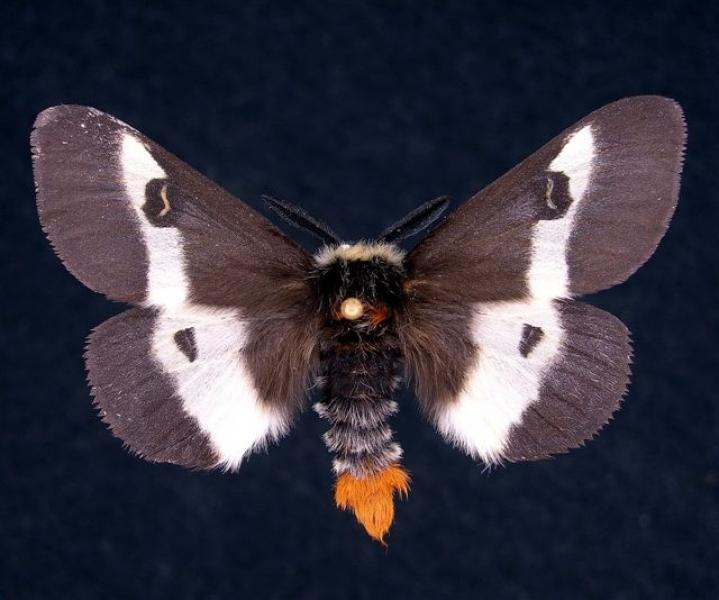 The name "buck moth" was given to this moth by American outdoorsmen who associated its flight season in October with deer hunting season (Cryan 1985).

Within New York State, 18 populations of the Coastal Barrens Buckmoth are known to occur on Long Island. The subspecies is probably restricted to southeastern Massachusetts, Rhode Island, and Long Island, New York (NatureServe 2010).

The presence of the Coastal Barrens Buckmoth over multiple years at most of the 18 documented populations in New York State indicates that the population is stable, viable, and reproducing.

The long-term trend for the Coastal Barrens Buckmoth in New York State is unknown (New York State Department of Environmental Conservation 2005), but on Long Island four populations are known to have become extirpated due to habitat loss from development, indicating the moth has probably declined from historical numbers.

Threats include destruction of habitat due to development and fire suppression, which may become a problem after several decades (NatureServe 2010). Insecticide spraying might also be a threat. In addition, the Coastal Barrens Buckmoth was assessed to be moderately vulnerable to climate change, meaning that its abundance and/or range extent within its current geographical area in New York State is likely to decrease by 2050 as a result of climate change. Factors that may increase its vulnerability to climate change include its physiological thermal niche, physiological hydrological niche, physical habitat, and diet (Schlesinger et al. 2011).

Maintaining habitat is the main management need. Periodic controlled burns or mechanical removal of vegetation are needed to maintain most of the natural communities that the Coastal Barrens Buckmoth inhabits. It is good practice to not burn entire habitats at once. Habitats should be burned in patches, always with some unburned areas left as refugia for species (Wagner et al. 2003). However, it is possible that the Coastal Barrens Buckmoth maintains a reserve of diapausing (dormant) pupae in the soil, enabling populations to survive fires (NatureServe 2010).

Additional inventory and monitoring is needed, particularly at the few unchecked potential sites, mostly scattered barrens remnants on Long Island. The Coastal Barrens Buckmoth flies during the day and can be captured by netting with butterfly nets. In addition, males can be attracted to bait from caged females, larvae can be easily observed on scrub oak (Quercus ilicifolia) and other shrubby vegetation, and eggs can be observed on twigs of scrub oak and other shrubby vegetation from the fall until the spring.

The Coastal Barrens Buckmoth is restricted to pitch pine-scrub oak barrens, including the Long Island Dwarf Pine Plains, on deep dry sands. It is also found on portions of the Nantucket heathlands with a lot of scrub oak. It is tolerant of either sparse canopy or no canopy (NatureServe 2010).

Buckmoths of the species Hemileuca maia in general have a wingspan of 50-75 mm, and black forewings and hind wings, with white semi-translucent bands in the middle. The reniform spot on the forewing has a black border, and it touches the black basal patch. Males have a red-tipped abdomen, and females have a black-tipped abdomen (Covell 1984). The Coastal Barrens Buckmoth subspecies is distinguished by its small size, narrow habitat restriction, and especially by the extensive bright yellow pattern on late-instar larvae that includes a well-defined lateral band in almost all individuals on Long Island. Larvae are otherwise usually black and have branching spines along their back that can sting (Tuskes et al. 1996). The adults are somewhat thinly scaled (NatureServe 2010).

Contrary to most moths that fly at night, Coastal Barrens Buckmoths fly during the day. On Long Island, they fly on sunny days in October. The moths emerge in the morning, with males emerging earlier than females. Mating usually takes place in the early afternoon, and females oviposit in the late afternoon. Females lay eggs in clustered rings, usually around twigs of scrub oak (Quercus ilicifolia), or sometimes other species of shrubby oaks. Females lay 1-3 egg ring clusters, with each cluster containing 50-250 eggs (Tuskes et al. 1996). The eggs overwinter and are coated with a waxy substance to prevent them from desiccating. In addition, the larvae inside are protected from the cold by a kind of natural antifreeze (Cryan 1985). The eggs hatch in the spring, and early-instar larvae feed together in groups in June and July. The small black larvae have many spines that inflict a painful sting when touched, which provides them protection from many predators but does not protect them from some parasites. By July, late-instar larvae scatter and become more solitary. At this stage, they may be found on plants other than oak. In late July or early August, larvae go a few cm below the soil surface, or between the soil surface and the leaf litter, where they transform into pupae and lie dormant until emerging as adult moths in the fall (Cryan 1985; Tuskes et al. 1996; Nelson 2007).

The larva of the Coastal Barrens Buckmoth is virtually restricted to scrub oak (Quercus ilicifolia) as its primary foodplant. A single report of oviposition on wild black cherry (Prunus serotina) is known. Like other subspecies of Hemileuca maia, larvae will readily eat most other oaks, willows, aspens, and P. serotina. In nature, older larvae do disperse and use willows, P. serotina, and other oaks occasionally if they encounter them. Young larvae eat new spring leaves, and older larvae eat mature leaves. Adult moths do not feed (NatureServe 2010).

On Long Island, New York, Coastal Barrens Buckmoth larvae can be seen from May until July, and adults can be seen during their flight period in October. In addition, overwintering eggs are visible on vegetation from late fall until early spring.

The time of year you would expect to find Coastal Barrens Buckmoth reproducing, larvae present and active, eggs present outside adult, and pupae or prepupae present in New York. 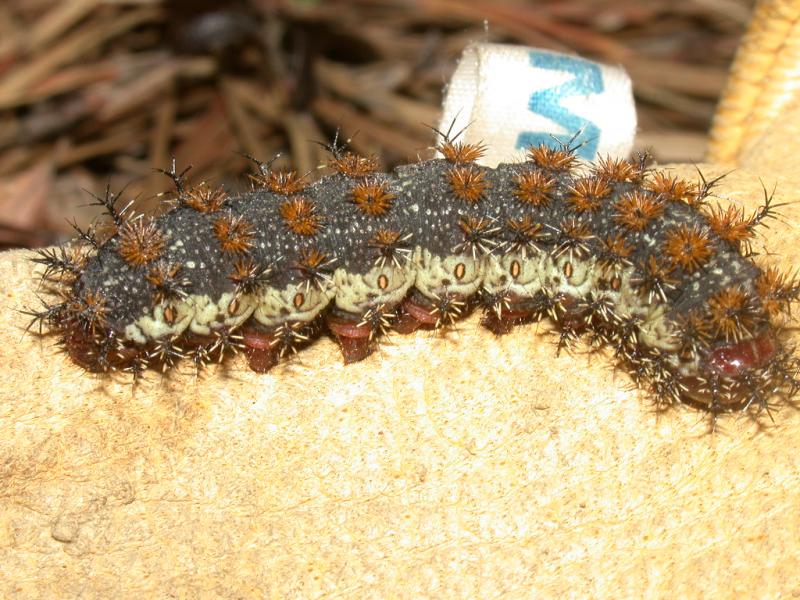 The name Hemileuca maia subspecies 5 is used here for a cluster of distinctive populations on Long Island, New York, and the Cape Cod region, which differ from all other maia populations north of Florida by a combination of characters including larval coloration, adult appearance, and high restriction to open pine canopy sandy scrub oak barrens. The general literature recognizes only H. maia maia and H. maia peigleri, and the name H. maia maia is applied to the entire species outside of Texas. Here, the distinctive northern Coastal Barrens Buckmoth is also recognized as subspecies 5, and technically it probably is typical H. maia maia. Hemileuca maia maia is used for the rest of the entire eastern US oak-feeding buckmoth species, except for subspecies peigleri from central Texas.