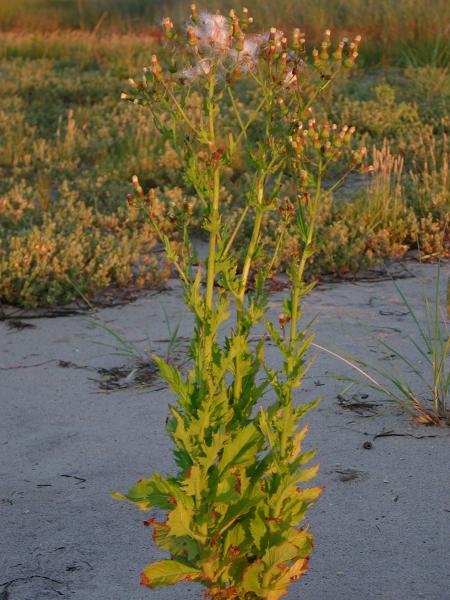 The Latin genus name was traditionally treated as grammatically feminine but the International Code of Botanical Nomenclature (naming code) states that names ending in "-ites" are to be treated as masculine. (Weldy, Troy and David Werier 2010). Therefore the species name has been changed from hieraciifolia in previous lists to hieraciifolius.

There are four existing populations but many thousands of plants on Fishers Island in the Long Island Sound. More populations are expected to be found on the North Fork and elsewhere on Eastern Long Island with more intensive surveys. There is only one, possibly two, historical records from the early 1900s.

There is not enough recent information to assess short-term trends.

This plant has always been rare on Long Island and more populations are being found than were historically known.

There are no current threats known.

Research is needed to find out if this species is intermixed with the common variety or whether it can be assumed that plants found along saltmarshes are always the rare variety.

This tall herb has only been found in Suffolk County on the North Fork of Long Island, Plum Island, and Fishers Island.

This herb is restricted to the coastal marshes of New Jersey, New York, Connecticut, and Massachusetts.

This plant is an erect, coarse herb up to 2 meters tall. The leaves are succulent, alternate on the upper stem while the lower ones often wither at flowering time. They are 6-20 cm long and 2-8 cm wide and without petioles. The margins are coarsely toothed and sometimes weakly lobed. They become smaller as you move up the stem and look like clasping bracts. There are 2-20 heads in the inflorescence and the involucre is long and tube-shaped with a swollen base. There are no ray flowers and white to yellowish disc flowers. The white fluffy pappus is very conspicuous in fruit. The fruit is 4-5 mm long with 16-20 nerves. Sometimes there are small hairs between the nerves (FNA 2006).

The best time to identify this species is in late in the season when it is in fruit.

The more common variety hieraciifolius is an upland plant with stems and leaves that are dry or turgid but not succulent. Its receptacles are 5-8 mm in diameter instead of 9-12 mm and the fruits are 2.3-3 mm long, not 4-5 mm. In addition, they have only 10-12 nerves on each face, not 16-20 like var. megalocarpus.

This species comes up during the summer and flowers in late July through early September. It fruits in late September through October.

The time of year you would expect to find Coastal Fireweed flowering and fruiting in New York.

In agreement with article 62.4 of the International Code of Botanical Nomenclature (McNeill et al. 2006), Erechtites is masculine because it ends in ites and therefore adjectival specific epithets are to be modified to have a masuline ending (i.e. E. hier

Information for this guide was last updated on: March 1, 2012