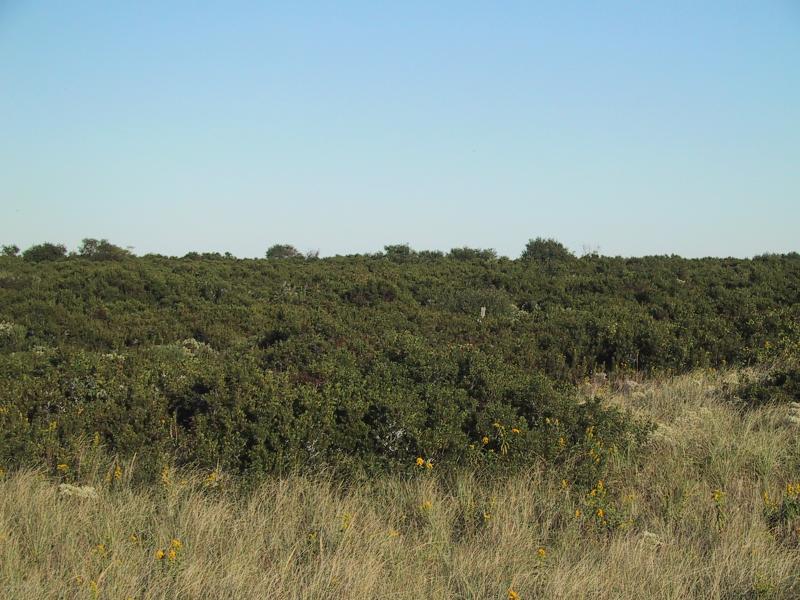 Maritime shrublands generally contain scattered stunted "salt pruned" trees with contorted branches and wilted leaves. When salt spray is blown ashore by strong offshore winds, it blasts against the trees and shrubs that are close to the sea. Their leaves and branches are slowly degraded over time, resulting in a thinned, asymmetrical growth form that appears to lean back away from the ocean.

The several documented occurrences have good viability and are protected on public conservation land. The community is restricted to the seacoast of the Coastal Lowlands ecozone in New York in Suffolk, Nassau, Richmond, Queens, and Kings Counties and is concentrated on dry seaside bluffs and headlands that are exposed to offshore winds and salt spray. The trend for the community is declining due primarily to threats from invasive species encroachment and coastal development that fragments maritime systems.

Community viability/ecological integrity and area of occupancy is suspected to be slowly declining, primarily due to invasive species proliferation. Coastal development and associated filling, road construction, and community destruction are additional contributing factors.

The number, extent, and viability of maritime shrubland in New York are suspected to have declined substantially over the long-term. These declines are likely correlated with coastal development and associated changes in landscape connectivity and natural processes.

Maritime shrubland is threatened by the proliferation of invasive exotic vines Oriental bittersweet (Celastrus orbiculatus) and Japanese honeysuckle (Lonicera japonica) are the two most aggressive species and threaten to convert the community to a 'vineland.' Additional exotic species (including Rosa rugosa, Pinus thunbergii, and Elaeagnus umbellata) also threaten community integrity. The community is also vulnerable to fragmentation, degradation, and extirpation from further coastal development, particularly development that separates these shrublands from the maritime influences of offshore winds and salt spray. The spread of hiking and horse trails also fragments the system and threatens community integrity.

Monitor the abundance of invasive species, particularly Oriental bittersweet and Japanese honeysuckle, in this community and, as needed, control their encroachment.

Surveys and documentation of additional occurrences are needed, as are data on rare and characteristic animals. Plot data collection from known sites is also needed.

A critical assessment of the long-term effects of Oriental bittersweet and Japanese honeysuckle invasion is needed, particularly addressing whether the community is eventually converted to a "vineland" or whether shrub canopy species are still able to survive and recruit. More research and classification work within possible landscape variants is needed (e.g., maritime shrublands on morainal headland vs. outwash barrier dune) and to possibly recognize "tall" (>2 m) and "short" (<2 m) maritime shrubland variants.

Restricted to the seacoast of the Coastal Lowlands ecozone in New York in Suffolk, Nassau, Richmond, Queens, and Kings Counties; concentrated on dry seaside bluffs and headlands that are exposed to offshore winds and salt spray.

This community occurs from Quebec in Canada through Maine to New Jersey (NatureServe 2009).

A shrubland community that occurs on dry seaside bluffs and headlands that are exposed to onshore winds and salt spray. This community typically occurs as a tall shrubland (2-3 m), but may include areas under 1m shrub height, to areas with shrubs up to 4 m tall forming a shrub canopy in shallow depressions. These low areas may imperceptibly grade into shrub swamp if soils are sufficiently wet. Trees are usually sparse or absent (ideally less than 25% cover). Maritime shublands may form a patchy mosaic and grade into other maritime communities. For example, if trees become more prevalent it may grade into one of the maritime forest communities, such as successional maritime forest. If a severe storm reduces shrub cover and deposits sand into the community it may be converted to a maritime dune. This community shares many shrub species with maritime dunes, but typically lacks the maritime dune herb species.

Known examples of this community have been found at elevations between 2 feet and 103 feet.

During the growing season, a characteristic shrub of maritime shrublands, bayberry, produces spicy-smelling fruit. These berries persist on the branches, and can be observed throughout much of the year. 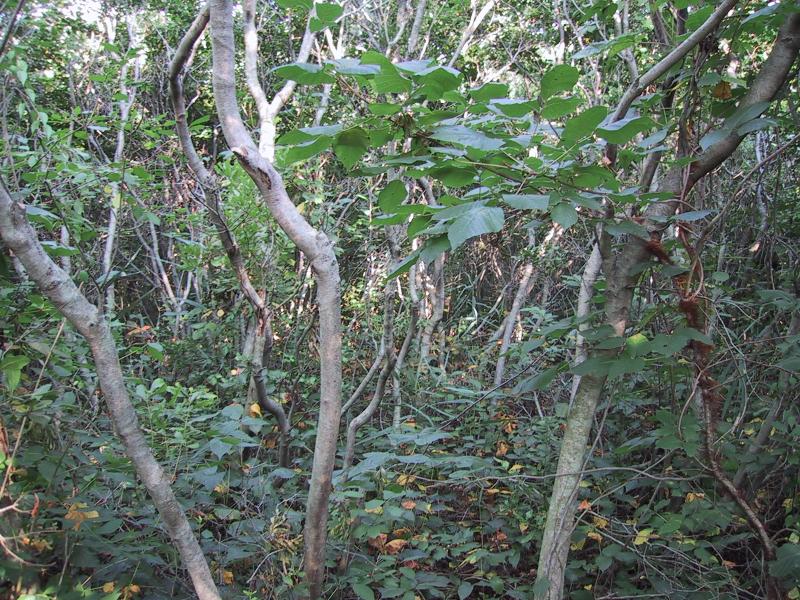 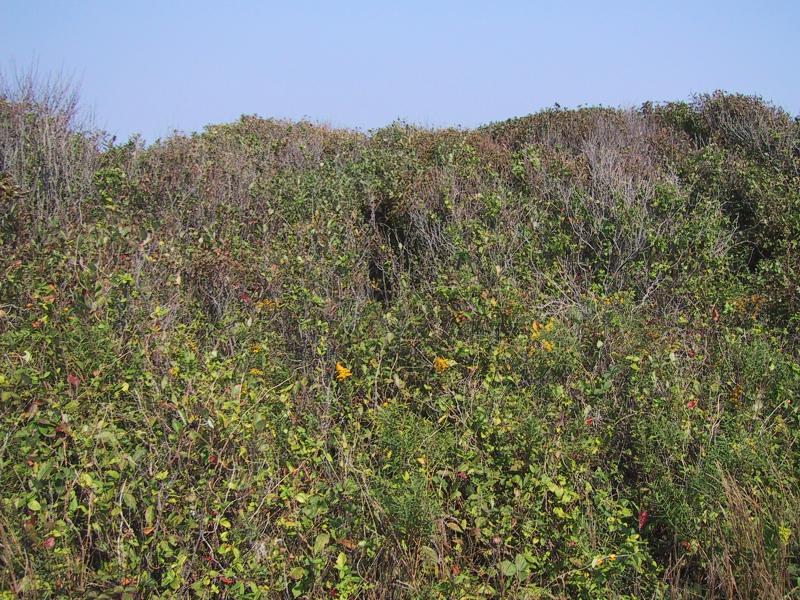 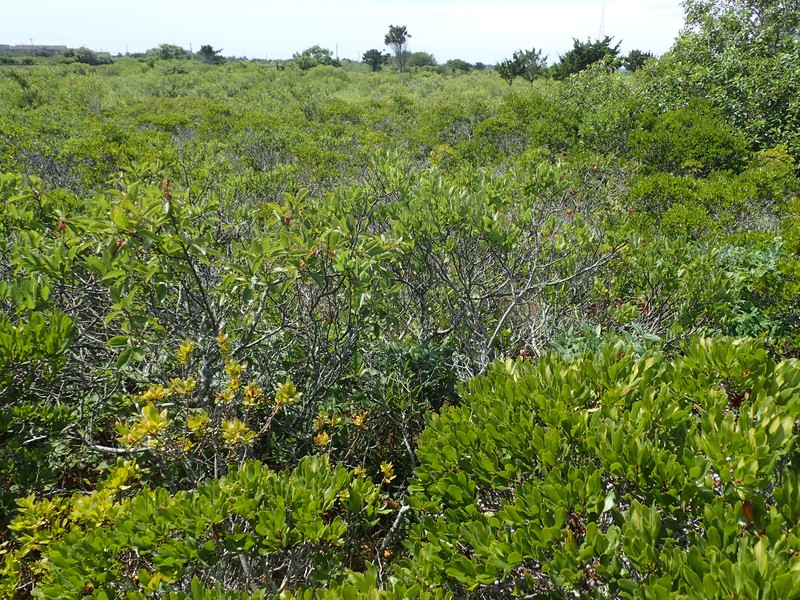 This figure helps visualize the structure and "look" or "feel" of a typical Maritime Shrubland. Each bar represents the amount of "coverage" for all the species growing at that height. Because layers overlap (shrubs may grow under trees, for example), the shaded regions can add up to more than 100%.