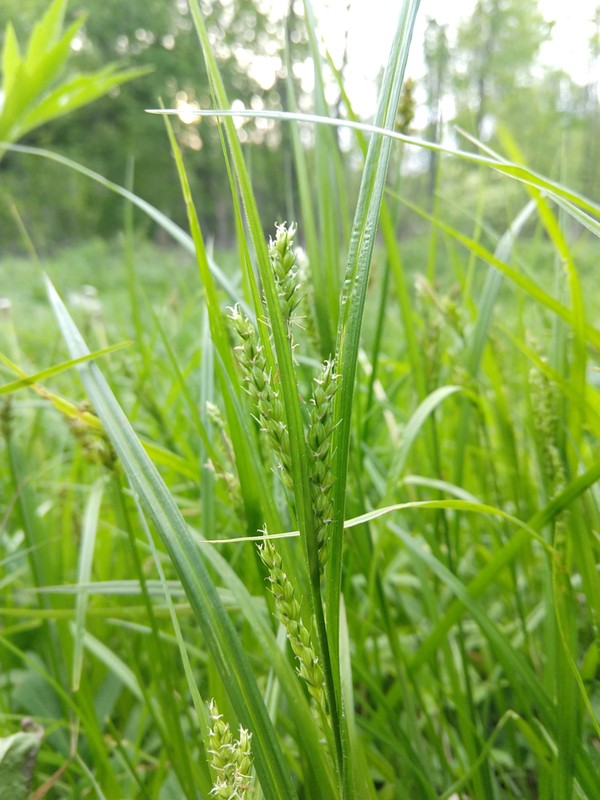 The specific epithet davisii is named after Emerson Davis who was alive from 1798-1866 and was an "amateur student of Carex" (Fernald 1970).

There are currently twelve known populations and at least a dozen historical sites. At one time, it was thought this sedge was mostly restricted to woodland edges near the freshwater high tide mark along the Hudson River. Recently, additional populations have been found at various inland sites. As more people become familar with this plant, we should expect to find more populations. The additions of these new populations may represent a positive trend for a species that is expanding its range, or it may simply be another sedge that has been grossly overlooked.

Most extant populations have only been monitored once so trends are hard to determine for these populations. One population appears to have increased over a 21 year period although the apparent increase may be the result of an incomplete initial survey. Two other populations appear to have remained stable over a period of 8 to 13 years. One of these populations is in a high use park and was recently moved to avoid extirpation. The success of the relocation is not known. Overall short term trends are not clear but may indicate a stable situation.

One known historical site is believed extirpated. There are an additional 12 sites that have not been seen in over 20 years but it is unknown if these populations are still extant. All extant sites have fairly small populations but it is unknown if this is because they have decreased in number over time or if they have always been small. Since some of the sites are near destroyed habitat it is likely that some of these populations may have been larger in the past. Overall the long term trends are not clear but appear to indicate at least a slight decline.

Follow up work needs to be done for the one extant population that was relocated. Invasive species management may be needed at a few extant sites.

Carex davisii is mainly known from areas adjacent or relatively near the Hudson River from a little north of Albany south to Queens. There are some historical records scattered throughout central and western New York. New York is near the northeastern edge of its range.

Carex davisii is a densely cespitose perennial. Basal leaf sheaths are maroon at their bases. Basal leaf blades are 3-8 mm wide and pilose abaxially. Culms are 30-100 cm tall. 3-5 spikes which arise singly at the nodes are present on the distal part of the culms. The lateral ones are on elongated peduncles. At least the lowest spikes arch or dangle at maturity. The lateral spikes are completely pistillate. The terminal spike is gynecandrous. Pistillate scales have an elongated awn tip that is 2.5-3.0 mm long. Perigynia are 4.5-6 mm long and abruptly narrow to a short (<0.5 mm long) beak (Waterway 2002).

Like many other Carex species especially ones in section Hymenochlaenae identification is easiest with almost mature to mature perigynia that are not yet easily shedding.

Carex davisii is in section Hymenochlaenae affectionately known as the green dangly jobs which characterizes the dangling lateral spikes at maturity. There are numerous other species in this section that occur in New York including C. aestivalis, C. arctata, C. castanea, C. debilis, C. formosa, C. gracillima, C. prasina, C. sprengelii, C. sylvatica, and C. venusta. Many of these are superficially similar. Carex davisii differs from all of them (except C. prasina) in having pistillate scales with an elongated awn (2.5-3 mm long) vs. with out or only a short awn (much less than 2.5 mm long). Other differences include:

Carex gracillima (one of the most common members in much of NY) and C. aestivalis have beakless and shorter perigynia. In addition, C. gracillima has generally glabrous foliage.

Carex formosa like Carex davisii has a preference for calcareous soils but is more of northern species close to the southern edge of its range in NY. It has smaller perigynia 3.5-5.0 mm long and lateral spikes with a few staminate flowers at their bases.

Carex prasina is fairly distinct compared to C. davisii. It has spikes that are closer together, glabrous blue green foliage, and perigynia with two main veins but otherwise veinless (compared to 9-12 veins for C. davisii).

Carex venusta is confined to Long Island, in NY, where C. davisii is not known to occur. Carex venusta has glabrous leaf blades and pistillate scales that are suffused with brown or chestnut (vs. hyaline with green mid vein for C. davisii) (Waterway 2002).

The time of year you would expect to find Davis' Sedge fruiting in New York. 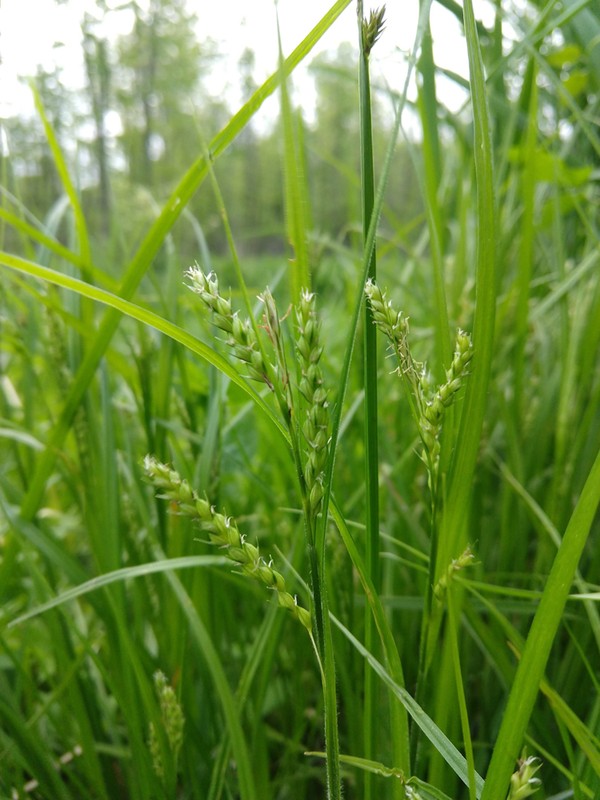 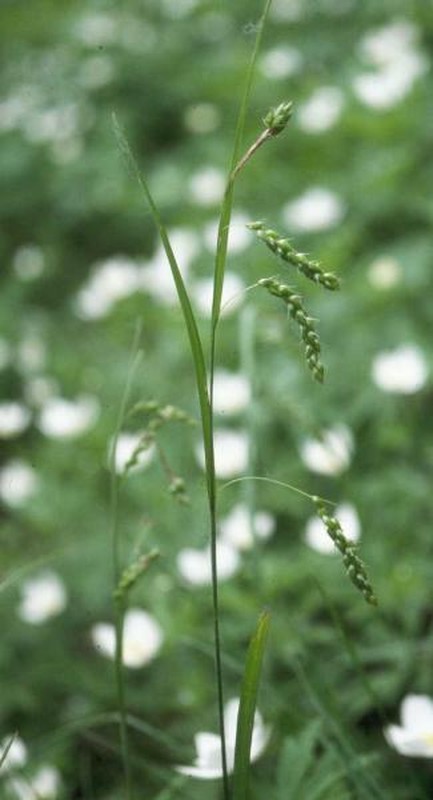 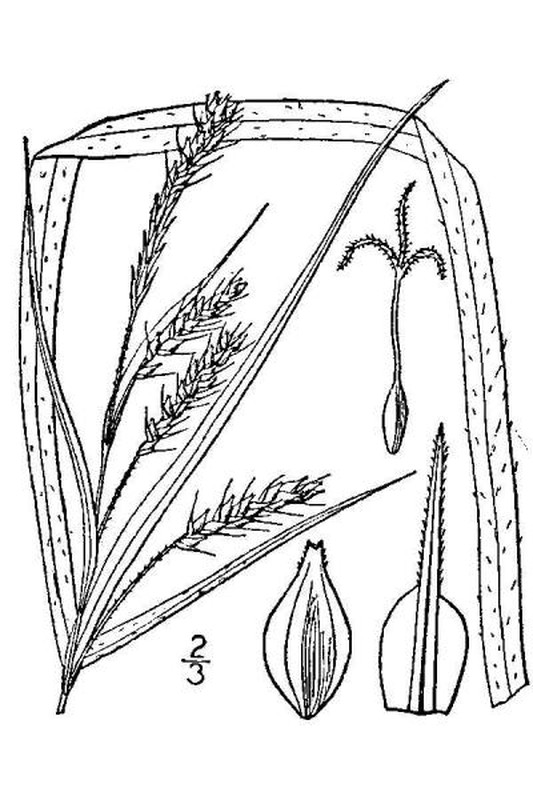 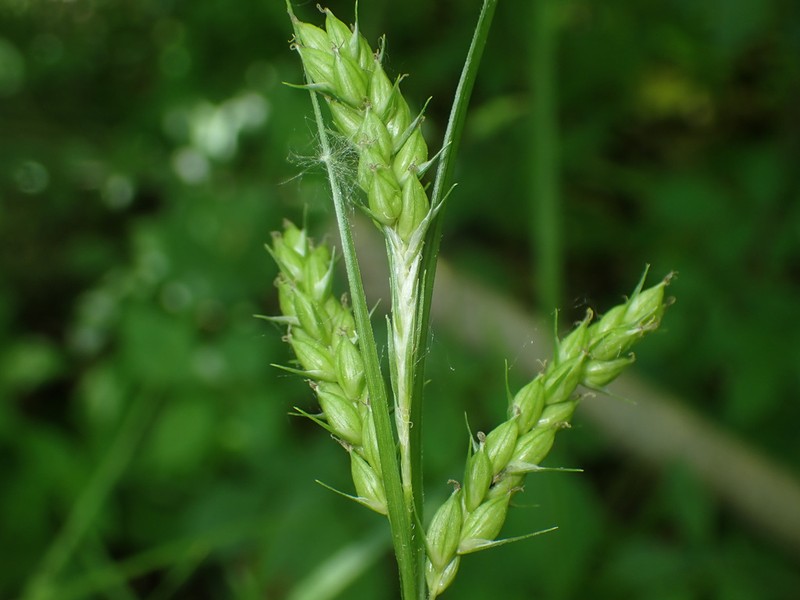 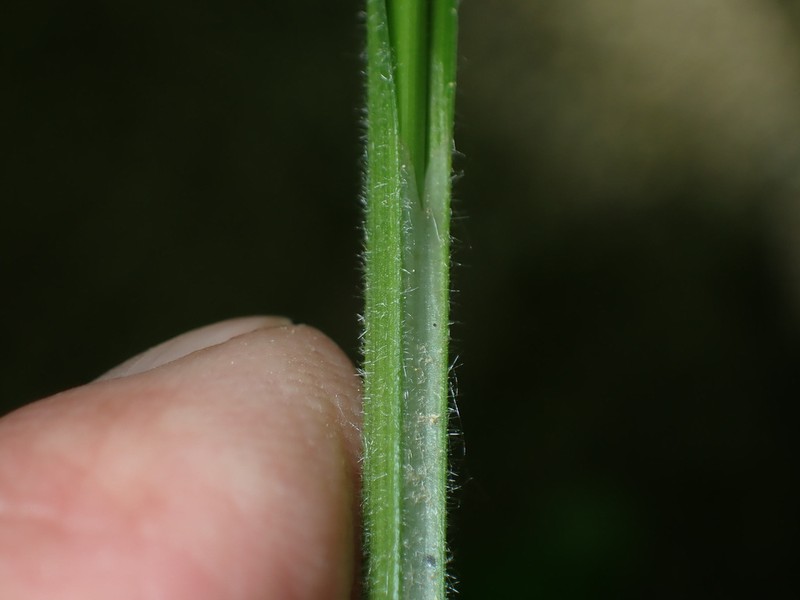 Carex davisii had been placed in section Gracillimae (Mackenzie 1931-35, Fernald 1970, Gleason and Cronquist 1991) but is now recognized in a more broadly circumscribed section, Hymenochlaenae. With more research it is apparent that C. davisii may be moved to a different section (Waterway 2002).