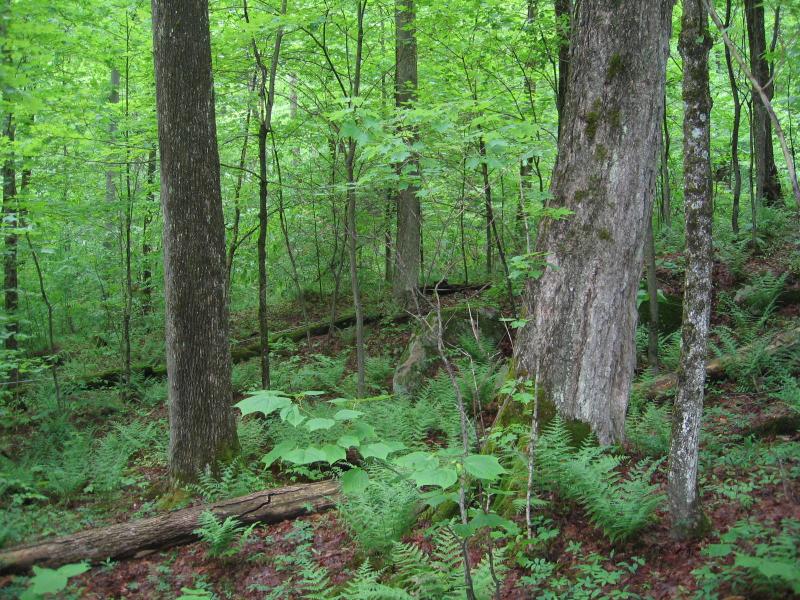 Basswood's fibrous inner bark was the source of fiber for ropes, mats, fishnets, and baskets constructed by Native Americans and settlers. The soft, light, easily-worked wood was once the wood of choice for prosthetic limbs and is now still valued as excellent hand-carving wood.

There are several hundred to a few thousand occurrences statewide. Some documented occurrences have good viability and many are protected on public land or private conservation land. This community is somewhat limited to the calcareous regions of the state, and includes several very large, high quality, old-growth examples. The current trend of this community is probably stable for occurrences on public land, or declining slightly elsewhere due to moderate threats related to development pressure. This community has declined substantially from historical numbers likely correlated with past logging, agiculture, and other development.

The number and acreage of maple-basswood rich mesic forests in New York have probably declined moderately in recent decades as a result of logging, agriculture, and development.

The number and acreage of maple-basswood rich mesic forests in New York have probably declined substantially from historical numbers likely correlated with past logging, agiculture, and development.

Threats to forests in general include changes in land use (e.g., clearing for development), forest fragmentation (e.g., roads), and invasive species (e.g., insects, diseases, and plants). Other threats may include over-browsing by deer, and air pollution (e.g., ozone and acidic deposition). When occurring in expansive forests, the largest threat to the integrity of maple-basswood rich mesic forests are activities that fragment the forest into smaller pieces. These activities, such as road building and other development, restrict the movement of species and seeds throughout the entire forest, an effect that often results in loss of those species that require larger blocks of habitat (e.g., black bear, bobcat, certain birds). Additionally, fragmented forests provide decreased benefits to neighboring societies from services upon which these societies often substantially depend (e.g., clean water, mitigation of floods and droughts, pollination in agricultural fields, and pest control) (Daily et al. 1997). Maple-basswood rich mesic forests are threatened by development (e.g., residential, agricultural), either directly within the community or in the surrounding landscape. Other threats include habitat alteration (e.g., roads, excessive logging, mining, deer over-browsing, plantations), and recreational overuse (e.g., ATVs, hiking and cross-county ski trails, campgrounds, horseback riding, mountain biking). Illegal dumping is a threat to at least one example. Pesticide use may be a threat to non-target insects in a few examples. Several maple-basswood rich mesic forests are threatened by invasive species, such as buckthorn (Rhamnus cathartica), Japanese barberry (Berberis thunbergii), shrubby honeysuckle (Lonicera morrowii), garlic mustard (Alliaria petiolata), black swallow-wort (Cynanchum louiseae), field bindweed (Convolvulus arvensis), Japanese honeysuckle (Lonicera japonica), and multiflora rose (Rosa multiflora). The emerald ash borer (Agrilus planipennis) is an Asian beetle that infests and kills North American ash trees. All native ash trees are susceptible, including white ash, green ash, and black ash. In New York, emerald ash borer has been found mostly south of the Adirondack Mountains, but in 2017 it was recorded in Franklin and St. Lawrence Counties. Natural communities dominated or co-dominated by ash trees would likely be most impacted by emerald ash borer invasion.

Management should focus on activities that help maintain regeneration of the species associated with this community. Deer have been shown to have negative effects on forest understories (Miller et al. 1992, Augustine & French 1998, Knight 2003) and management efforts should strive to ensure that regenerating trees and shrubs are not so heavily browsed that they cannot replace overstory trees. Avoid cutting old-growth examples and encourage selective logging areas that are under active forestry.

Critically compare this community to beech-maple mesic forest and confirm that occurrences of each are properly classified.

This community is currently known from calcareous areas across the Ontario Lake Plain, the St. Lawrence Valley, and the Adirondack Mountains. Maple-basswood rich mesic forests are also known from the Taconic Mountains and along the Helderberg Escarpment. Several high quality examples are known from the unglaciated section of the High Allegheny Plateau within Allegany State Park.

This somewhat broadly-defined community probably occurs throughout the Northeast U.S., but is absent or restricted to very small patches along the Atlantic coast. It is widespread in the Great Lakes basin, where it is concentrated. The range is estimated to span north to southern Ontario, west to Minnesota, southwest to Indiana and Ohio, south to Pennsylvania and New Jersey, and east to Massachusetts and Maine.

A species-rich hardwood forest that typically occurs on well-drained, moist soils of circumneutral pH. Rich-soil herbs are predominant in the ground layer and are usually correlated with calcareous bedrock, although bedrock does not have to be exposed. Where bedrock outcrops are lacking, surficial features such as seeps are often present. The dominant trees are sugar maple (Acer saccharum), basswood (Tilia americana), and white ash (Fraxinus americana).

This community is identified by a consistent presence and abundance of basswood in association with sugar maple and the high diversity of rich-soil herbaceous species, including a good display of spring ephemerals. The diverse flora of rich herbs (especially ferns) including maidenhair fern (Adiantum pedatum), bulblet fern (Cystopteris bulbifera), Goldie's fern (Dryopteris goldiana), silvery spleenwort (Deparia acrostichoides), glade fern (Diplazium pycnocarpon), and plantain-sedge (Carex plantaginea) solidly identify this community. This diversity of rich overstory and understory plants is usually correlated with calcareous, or possibly circumneutral bedrock, and a soil pH greater than 5.0.

Known examples of this community have been found at elevations between 230 feet and 2,260 feet.

Because the key to distinguishing a maple-basswood rich mesic forest from related types is its vascular plant composition and diversity, it is easiest to identify the community during the growing season, from late May through summer. Striking seasonal leaf color can be enjoyed in the fall. 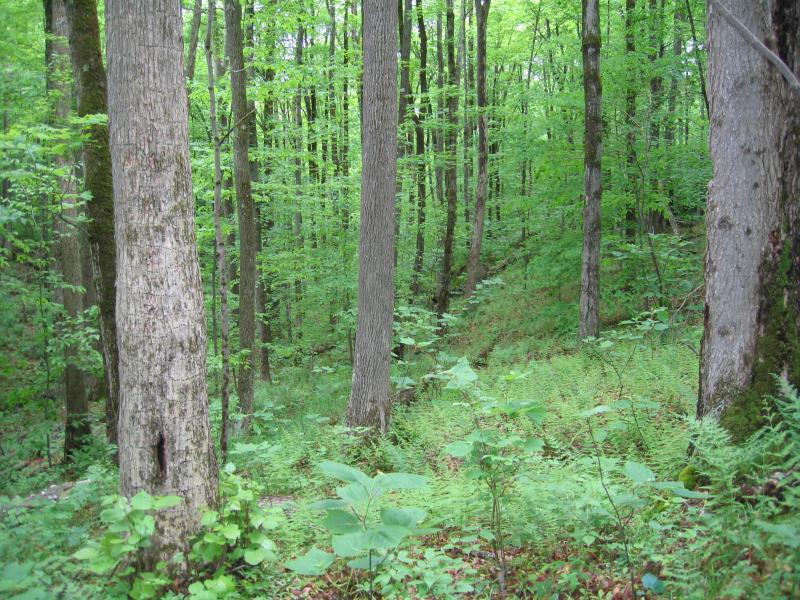 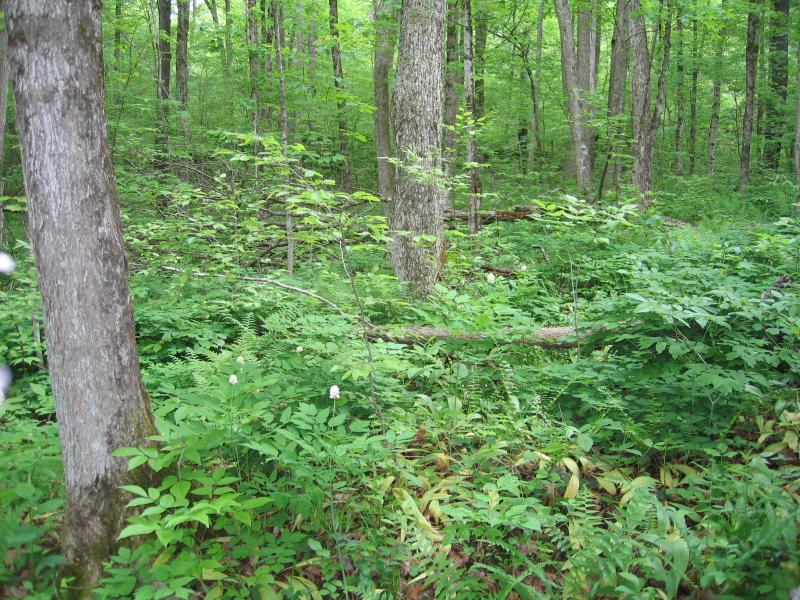 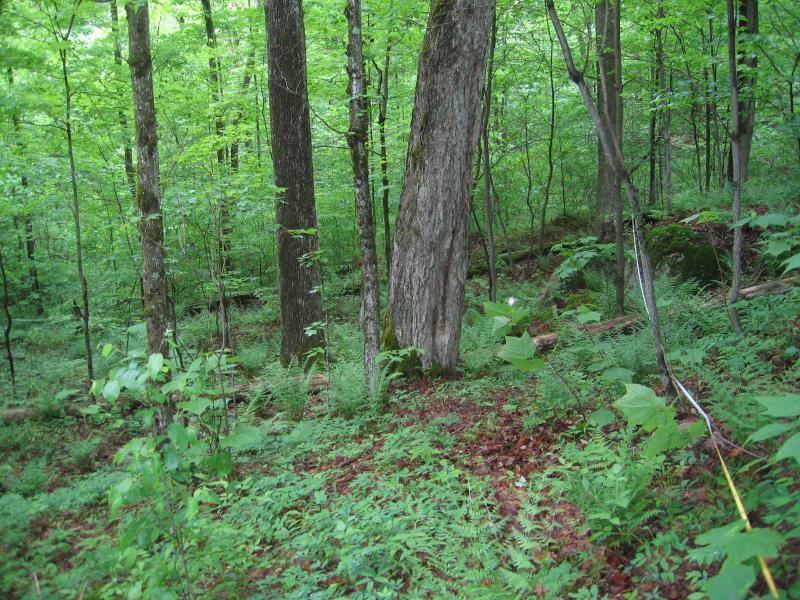 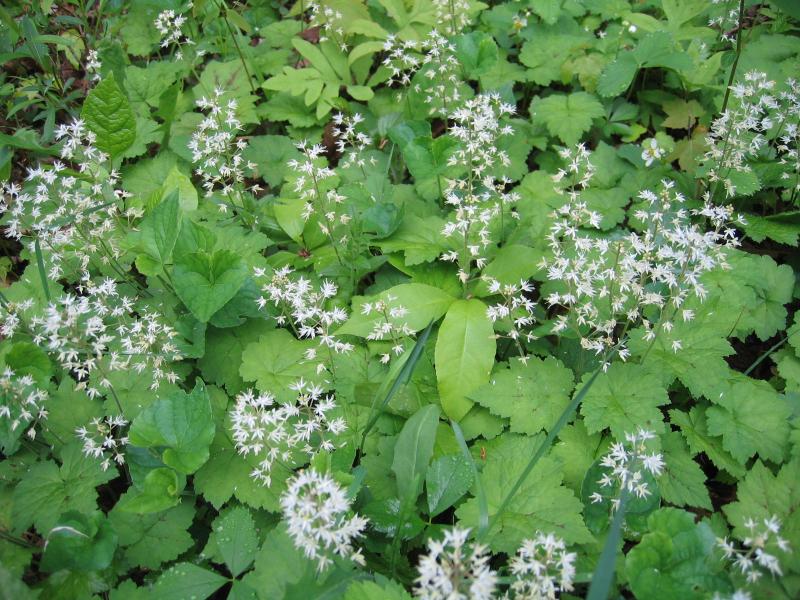 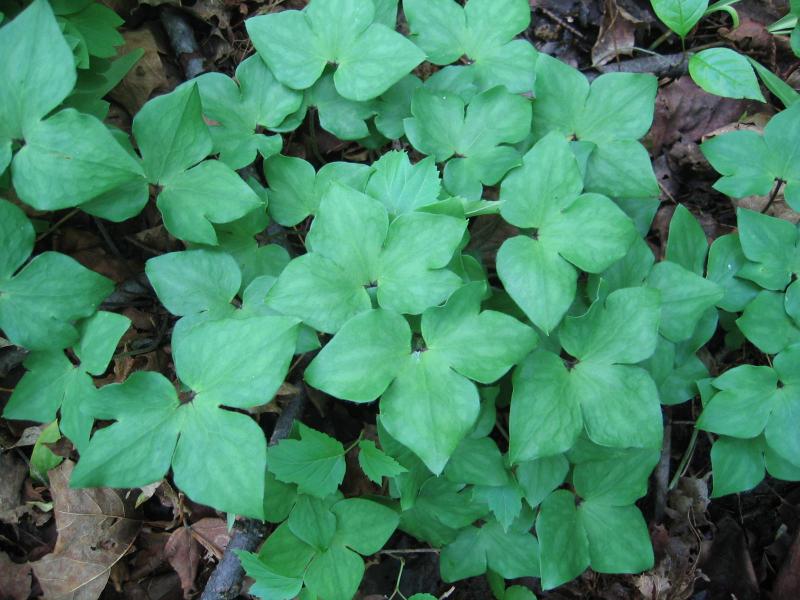 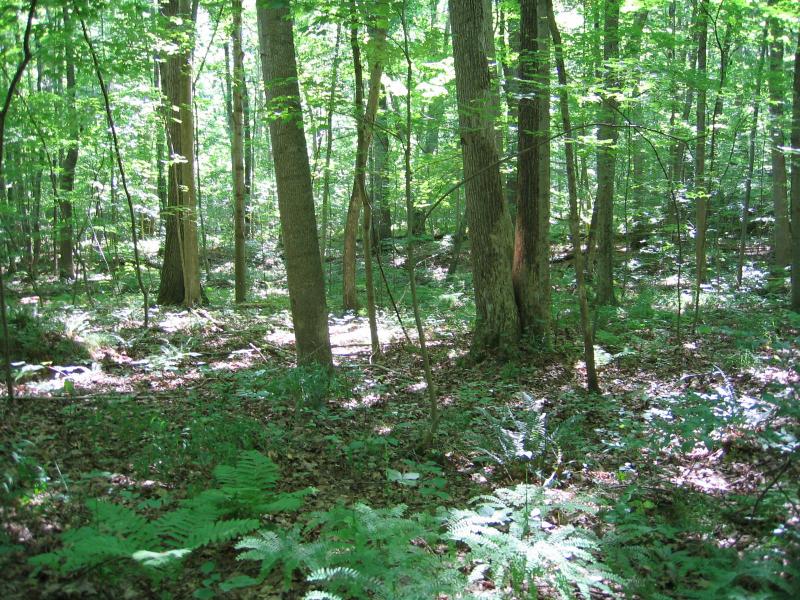 This figure helps visualize the structure and "look" or "feel" of a typical Maple-Basswood Rich Mesic Forest. Each bar represents the amount of "coverage" for all the species growing at that height. Because layers overlap (shrubs may grow under trees, for example), the shaded regions can add up to more than 100%.

Information for this guide was last updated on: March 21, 2017