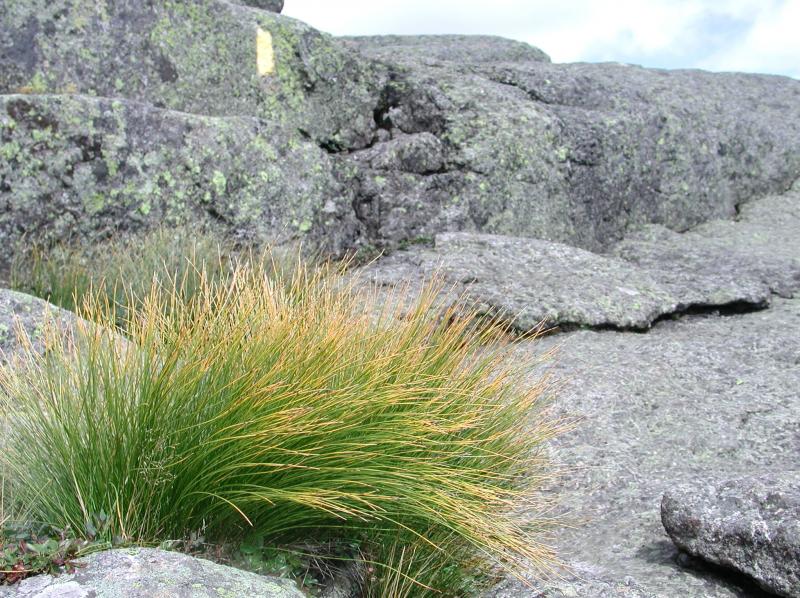 The species name cespitosum means tufted, and refers to the dense tussocks that this plant makes. This is the most common graminoid in New York's alpine ecosystem, and gives the meadows their distinctive "grassy" appearance. It turns a beautiful golden color in the fall.

Trampling by hiker traffic is threatening at least some of the populations, but it is unclear if this impact is leading to a decline in the sizes of populations. Fourteen of the 20 known extant populations were first documented since 1988. It is unlikely that these represent new populations; rather they were probably overlooked in the past. Some populations are quite large, but overall, short-term trends are unclear.

Two populations from western New York are only known from historical records. The exact locations of these populations is not clear, but they are from towns that have had a lot of human impact. Further investigations and survey work are needed to determine the status of these populations. Fourteen of the 20 known extant populations were first documented since 1988. It is unlikely that these represent new populations; rather they were probably overlooked in the past. No populations are known to have become extirpated in the past 100+ years. Overall, long-term trends are unclear but do not indicate a rapid decline.

Trampling by hiker traffic threatens at least parts of most of the populations. At least parts of the only known extant population in western New York are potentially threatened by Phragmites australis ssp. australis. Management to remove this non-native Phragmites has been implemented at this site.

Research to help determine the location of the two historical populations from western New York should be conducted. Follow up survey work to these populations is needed to determine if they are still extant. A few of the known extant populations need to be surveyed to better assess their condition.

In New York, this species is almost entirely restricted to the highest mountains in the high peaks region of the Adirondacks. There are also three disjunct populations (one current and two historical) known from western New York (Monroe and Genesee Counties).

Deer's hair sedge is a densely tufted grass-like perennial. The stiff and narrow stems are 5-45 cm tall. The leaves are inconspicous and mostly appear as scales at the base of the stem. One leaf occurs further up the stem. At the tip of the stem is a tiny (up to 1/4 inch long) cluster of small inconspicuous flowers (spikelet). Each spikelet contains between 3-9 flowers enclosed at the base by small scales. The fruits are one seeded, hard walled, and less than 1/16th of an inch long (Fernald 1970, Crins 2002).

Trichophorum cespitosum ssp. cespitosum is a densely cespitose perennial sedge without rhizomes. The culms are terete and have longitudinal rows of stomata with stomatal cavities interior to the stomata. The base of the culms are covered with numerous brown sheaths. There is also one leaf that occurs further up the culms. This leaf is composed of a sheath and a blade 1.5-8.0 mm long. The sheath opening is about 1 mm in diameter and suborbicular. To see and measure this opening, the culm should first be pulled out from the sheath. The spikelets are 3-9 flowered, 3.3-7.0 mm long, and are subtended by a bract which equals the length of the spikelet. All the scales of the spikelets subtend florets and are reddish to dark brown. The achenes are subtended by six smooth to scabrous perianth bristles, compressed trigonous, and 1.4-1.7 mm long (Fernald 1970, Case 1999, Crins 2002).

This species is easiest to identify when it is in flower or fruit. Specimens should include full culms including the basal sheaths.

Although not recognized by Crins (2002) and other authors (Gleason and Cronquist 1991, Haines and Vining 1998), Fernald's var. delicatulus is distinguished by less stiff stems, blackish or lead colored basal sheaths, and calcareous habitats.

This species starts to flower in June and is in fruit through September. Therefore, the best time to survey for this species is from mid-June until early September.

The time of year you would expect to find Deer's Hair Club Sedge vegetative, flowering, and fruiting in New York. 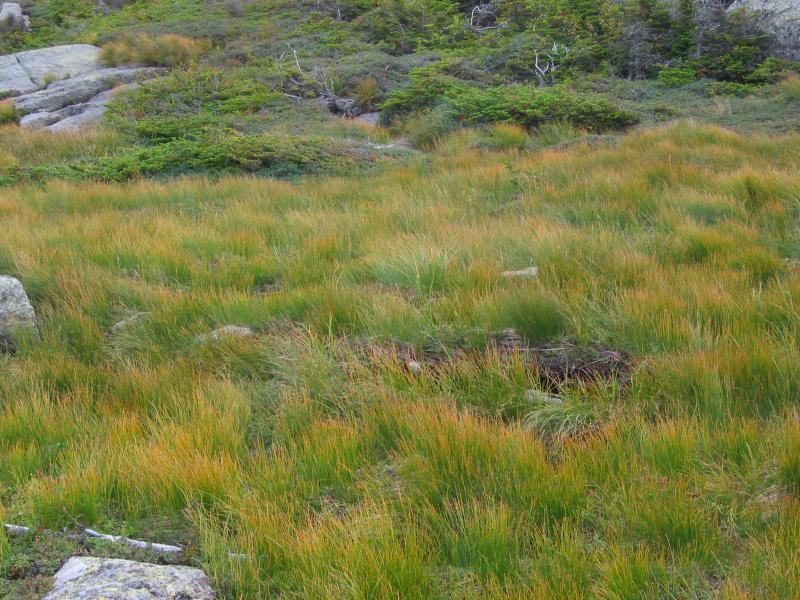 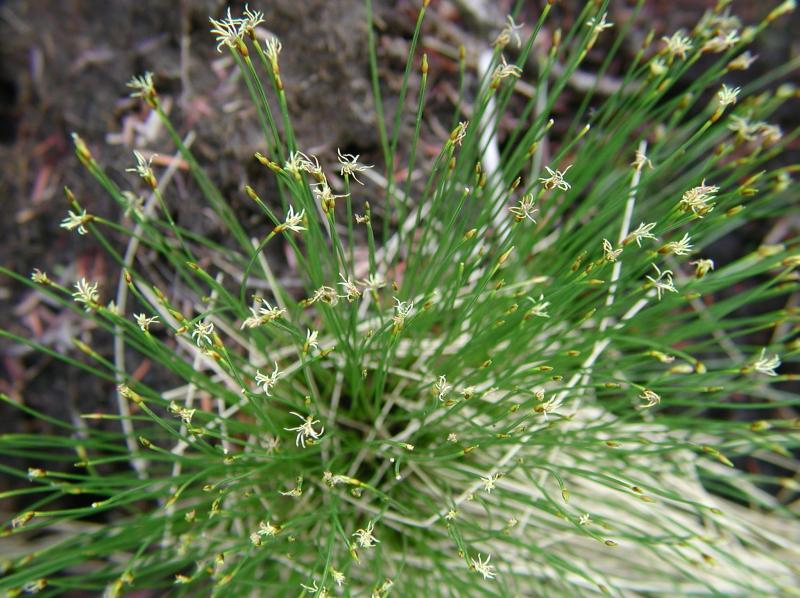 The segregate genus Trichophorum has been used as a separate genus distinct from Scirpus or as a section of Scirpus since 1805. The type for this genus has been conserved as T. alpinum (Salmenkallio and Kukkonen 1989, Greuter et al. 2000). Trichophorum is currently accepted as a distinct genus of nine species worldwide including T. cespitosum (Crins 2002). The name Baeothryon has sometimes been applied to this group but is now considered a synonym for Eleocharis (Salmenkallio and Kukkonen 1989). As Fernald (1921) pointed out, the name used by Linnaeus in the original publication was Scirpus cespitosus, and therefore, should not be altered to S. caespitosus (Greuter et al. 2000) as has been done by some authors (Palla 1897). When placed in the genus Trichophorum, the specific epithet should be altered to cespitosum, to agree grammatically with the new genus name (Greuter et al. 2000). The transfer of S. cespitosus to T. cespitosum was done by both Hartman in 1849 and Schur in 1853 (International Plant Name Index 2007). Therefore, Schur's authorship is considered a later isonym and disregarded. The correct authorship is T. cespitosum Hartman. Two taxa within T. cespitosum have been recognized as long ago as 1897 (Palla 1897, Swan 1999). At the subspecific rank these are T. cespitosum ssp. cespitosum and T. cespitosum ssp. germanicum. Subspecies germanicum is restricted to Atlantic and Subatlantic Europe while ssp. cespitosum is circumpolar and occurs in North America, Europe, and Asia. There has been differing opinion as to which of these taxa applies to the species Linnaeus described as Scirpus cespitosus. Swan (1999) designated the lectotype thereby fixing the circumpolar taxa as the type of the species. In North America, the name S. cespitosus var. callosus has been applied to the circumpolar taxa and now clearly needs to be considered a syno