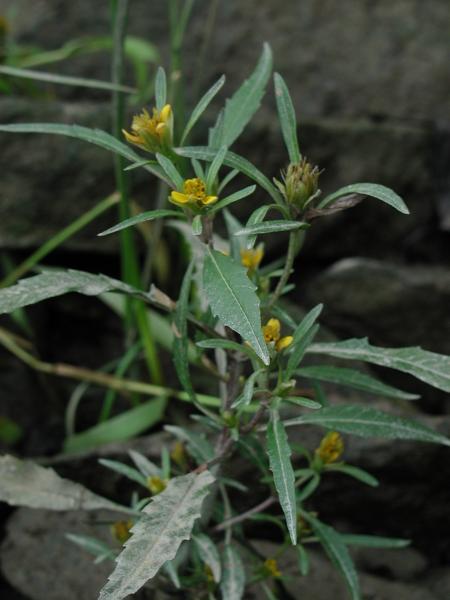 This species was originally placed in the genus Coreopsis and given the species name bidentoides because it resembled plants in the genus Bidens. Estuary beggar-ticks is being discovered with more frequency along the Hudson River. Some populations contain thousands of plants spread along the shoreline of the river.

There are 26 existing populations and a few more populations may be discovered with more survey of Hudson River shoreline. Most historical records have been relocated but a few remain undiscovered.

Populations seemed to be stable along the Hudson River with many discoveries found within the last 20-30 years. Small occurrences may be found in additional riverside habitat but large populations are not likely.

Most of the historical records have been found and continue to survive although a few historical records are in areas that have been developed industrially and have become extirpated. Populations probably have fluctuated greatly in the past, especially when there was more industry along the river, but populations have recovered as habitats have become more natural again.

The shoreline habitats where this plant grows are threatened by erosion from boat wakes, overuse by recreational boaters, direct development or hardening of the shoreline and possibly by sea level rise in the future. Phragmites and purple loosestrife may be a threat in some areas but the severity is low.

Maintain marsh natural processes and prevent recreational boating from affecting populations by siting docks and landings away from populations.

Research could be done on how sea level rise could affect this and other riverside species in the future.

In New York Bidens bidentoides has been found in freshwater tidal mudflats and marshes, often at the border between mudflat and marsh, or along sandy or muddy openings within a marsh (New York Natural Heritage Program 2007). Fresh or brackish tidal shores (Fernald 1970). Estuaries (Gleason 1952).

In New York this species occurs only in the lower (freshwater, but tidally influenced) portion of the Hudson River, upstream as far as Rennselaer County.

This species is known only from large rivers and freshwater estuaries in the Mid-Atlantic region of the US, from New York south through New Jersey, eastern Pennsylvania, Delaware, and Maryland.

Delmarva Beggar-ticks is an annual, opposite-leaved herb of tidal shores and mudflats. It has coarsely-toothed leaves which narrow at the base into slender petioles. Its flower heads are entirely discoid (lacking petal-like ray flowers), about 5 to 15mm wide, and erect. The disk corolla is 4-lobed, and the fruit are achenes, visibly striate (lined) under magnification.

Bidens laevis and Bidens cernua have a mature disk that is wider than 1.5 cm, 5-lobed disc flower corollas, and fruiting heads that are often nodding. Bidens hyperborea, B. laevis and B. cernua all have sessile leaves and a 4-awned achene that is convex and cartilaginous at the top. Bidens cernua has a stem that is soft and usually hispid (B. bidentoides has glabrous stems).

This species flowers from late August into October, and fruits from late September into mid October.

The time of year you would expect to find Estuary Beggar Ticks flowering and fruiting in New York. 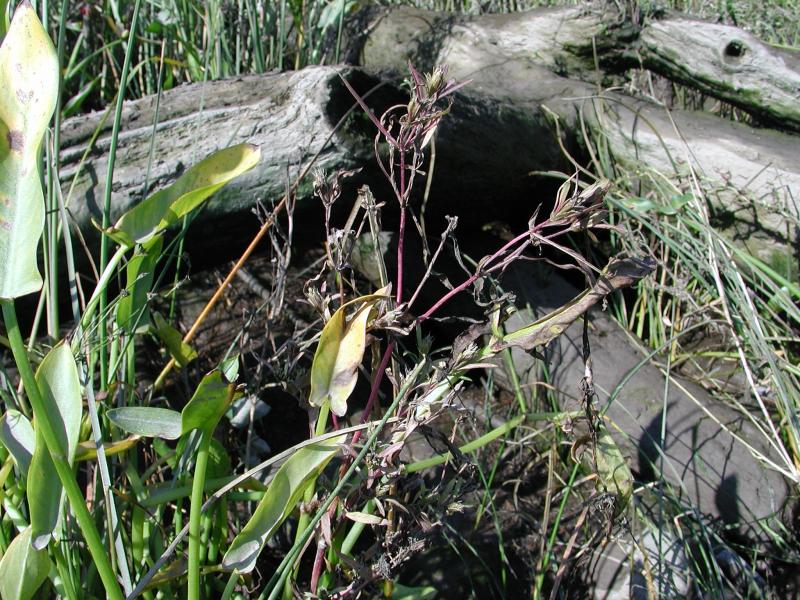 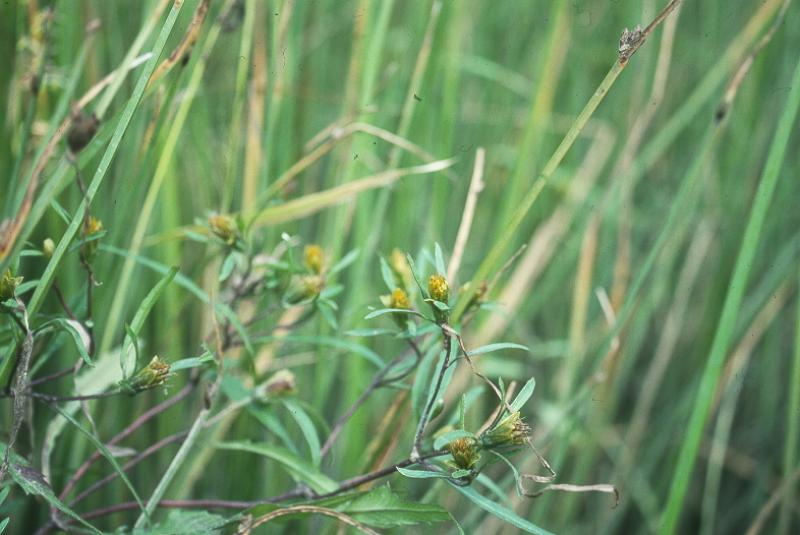 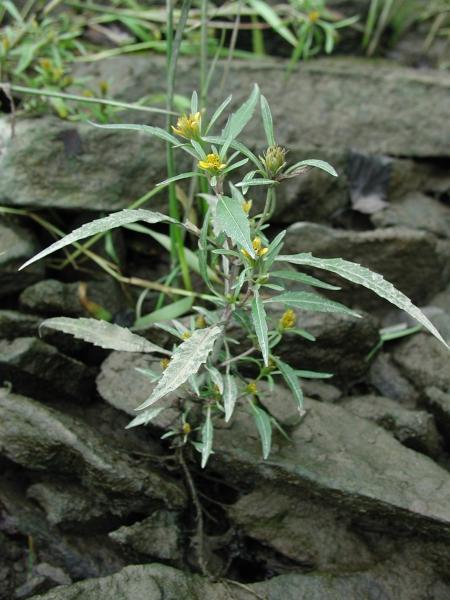 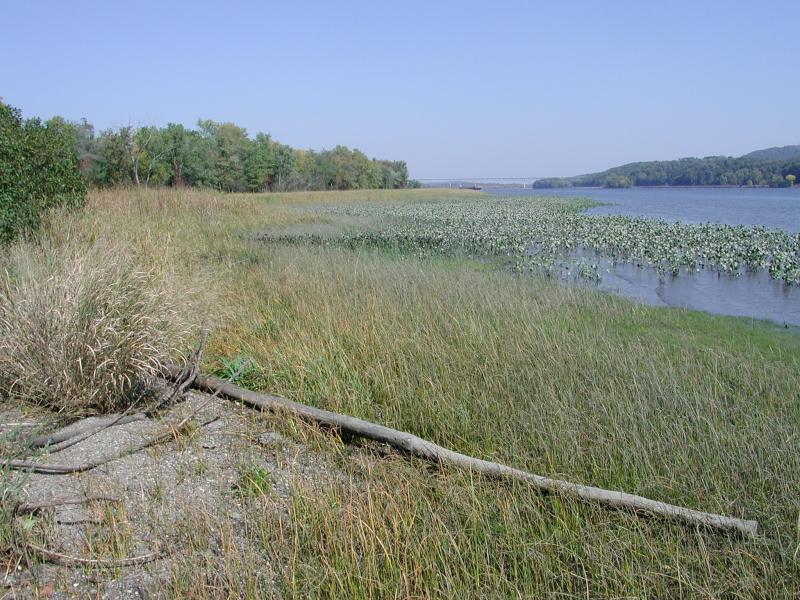 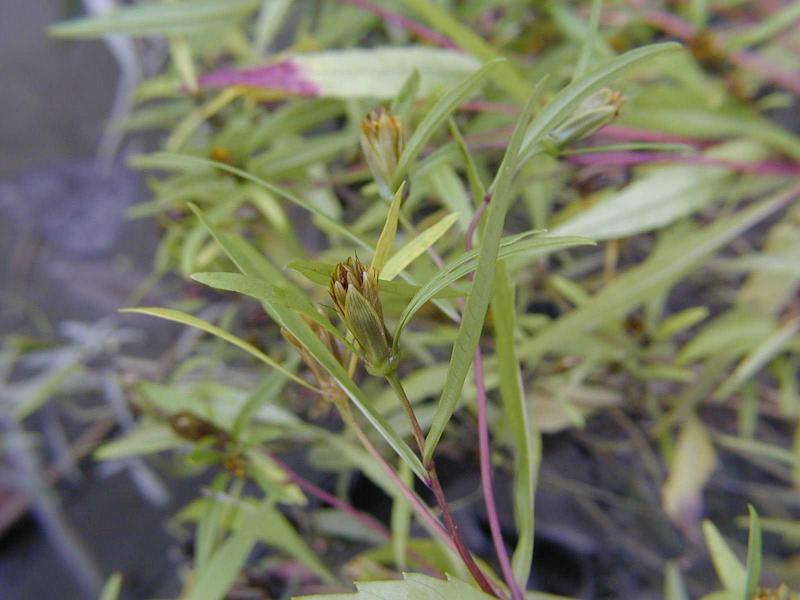 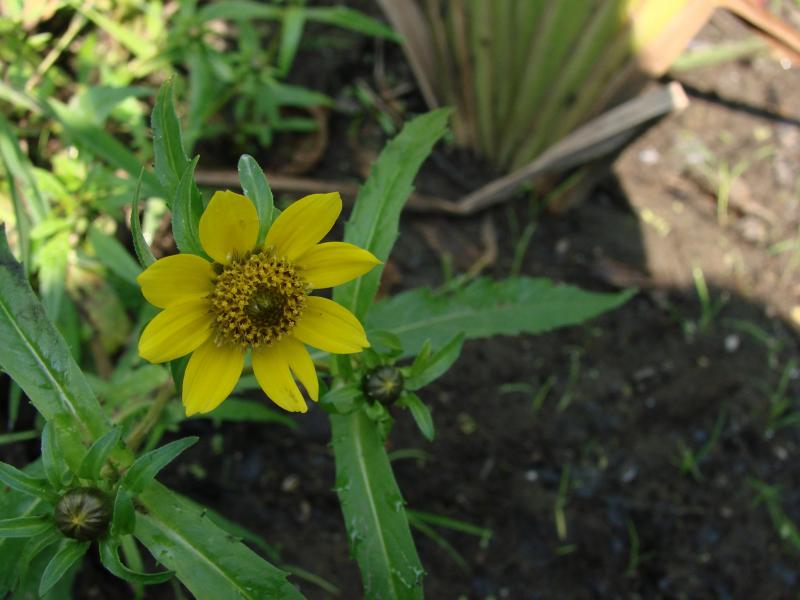