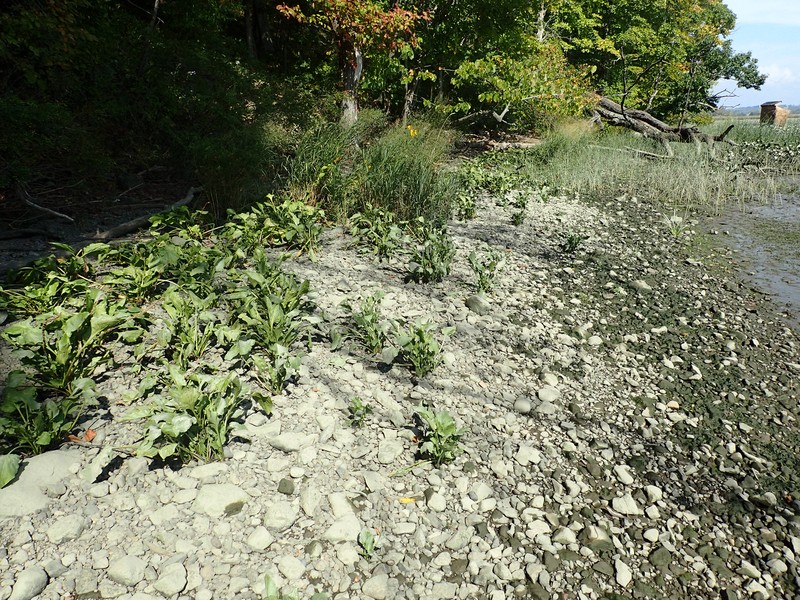 Bank erosion along freshwater intertidal shores can increase sedimentation and turbidity, which decreases the light availabilty to underwater plants and animals. Placing hard structures like bulkheads or rip-rap along developed shorelines to prevent erosion can destroy wetlands and actually increase erosion on adjacent shorelines. While these structures may be necessary along high energy shorelines, alternatives such as marsh restoration are effective, less expensive options. Retaining or restoring marshes lessens the effects of erosion, reduces pollutants entering the water, enhances fisheries near the property, and creates a more attractive setting.

There are estimated to be less than 40 occurrences in the state, and probably not many more in the northeast. This small, narrow-band community is restricted to the freshwater portion of tidal rivers where the substrate is rocky or gravelly. There are less than 10 occcurrences currently documented by New York Natural Heritage and they are limited to Columbia, Green, Dutchess, and Ulster Counties. Given their location at the tidal-upland interface, several of these occurrences are threatened by shoreline development and invasive plants.

The number of freshwater intertidal shores in New York have probably remained stable in recent decades. However, the condition and size of a few occurrences may have declined due to invasive species, such as purple loosestrife (Lythrum salicaria) and reed grass (Phragmites australis ssp. australis).

Buffers that diminish or eliminate disturbances in this estuarine community are critical considerations for any development project. Such disturbances include the influx of water-borne solutes (road salt, fertilizers, herbicides, pesticides, sewage), water-borne sediments, and noise pollution. Strive to minimize or eliminate artificial shorelines that replace natural freshwater intertidal shores. Maintain high connectivity between the river and bays with shores to encourage full tidal flushing during each cycle of the tides. For example, barriers such as railway causeways should have numerous culverts to allow sufficient hydrologic connectivity.

This community is currently restricted to the central Hudson Valley portion of the Hudson River, ranging from Rensselaer County to Rockland County, with most occurring in Columbia, Green, Dutchess, and Ulster Counties.

Freshwater intertidal shores occur along tidal rivers from New York to North Carolina where rocky and gravelly substrates are present.

Freshwater intertidal shore communities occur on the intertidal gravelly or rocky shores of freshwater tidal rivers and creeks, and sometimes at the base of cliffs. The water salinity values are below 0.5 parts per thousand (ppt). The vegetation may be sparse, and may include heart-leaved plantain (Plantago cordata), water-hemp (Amaranthus cannabis), switchgrass (Panicum virgatum), golden club (Orontium aquaticum), clammy hedge-hyssop (Gratiola neglecta), beggar-ticks (Bidens spp.), and cardinal flower (Lobelia cardinalis).

A community of intertidal gravelly or rocky shores of freshwater tidal rivers and creeks, sometimes occurring at the base of cliffs. The water salinity values are below 0.5 ppt. The vegetation may be sparse, and is characterized by wetland herbaceous species.

Known examples of this community have been found at elevations between -1 feet and 20 feet.

Throughout the growing season, from spring to late summer, wildflowers characteristic of freshwater intertidal shores come into bloom. These include golden club, clammy hedge-hyssop, beggar-ticks, and the brilliant cardinal flower. 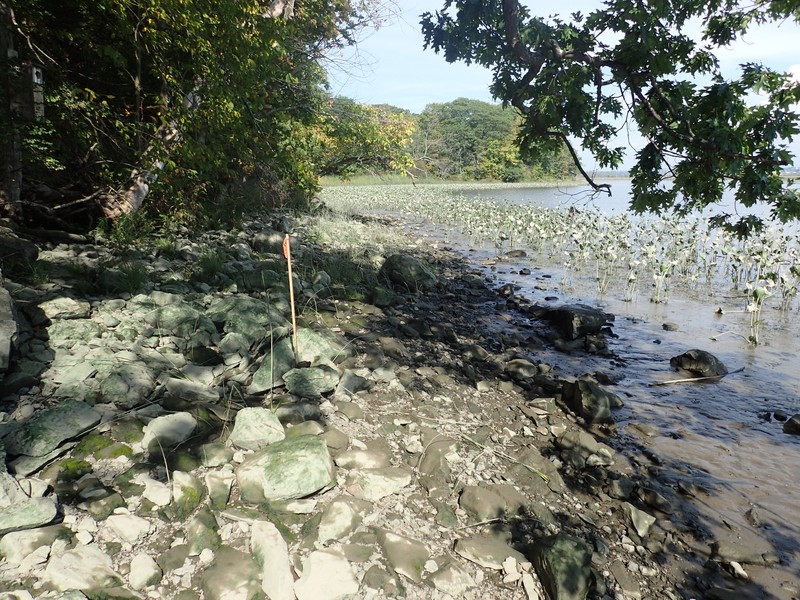 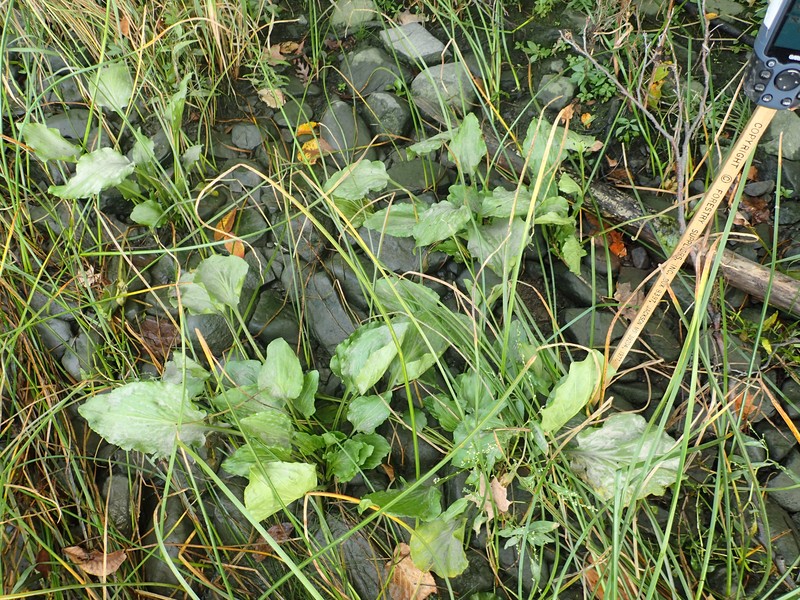 This figure helps visualize the structure and "look" or "feel" of a typical Freshwater Intertidal Shore. Each bar represents the amount of "coverage" for all the species growing at that height. Because layers overlap (shrubs may grow under trees, for example), the shaded regions can add up to more than 100%.