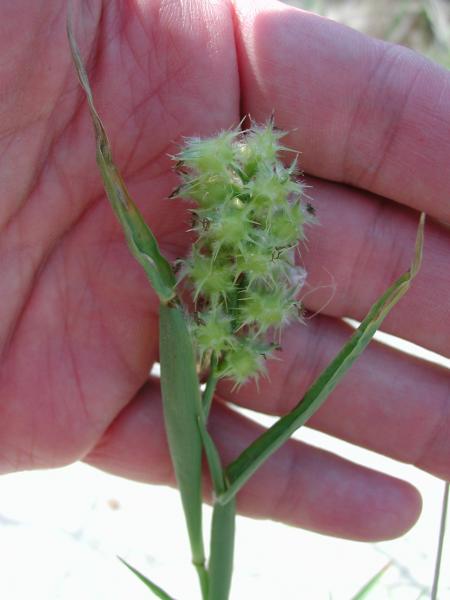 The species name of this spiny-fruited grass derives from the Latin "tribulus", the name for the antipersonnel weapon called a caltrop. This weapon usually consists of four spikes, one of which always points upward when supported on the ground by the other three (Wikipedia contributors). While the Civil War raged on in 1862 William H. Leggett collected New York's first specimen of this species on Staten Island. The specimen is now in the collection of the New York Botanical Garden.

There are 8 known populations, but almost all of them have 100 plants or less. They need disturbed sands to thrive, but they are also subject to direct destruction by beachgoers, especially since they occur on popular tourist beaches. There are about 20 historical occurrences.

The short-term trend seems stable with little fluctuation over the years. Populations would have been expected to grow with more protection of the beach for rare shorebirds, but this does not seem to have happened.

The number of populations has declined over the years and the number of beaches available to the species is not expected to increase.

The beaches are heavily used and the plants are subject to beach grooming, ATV use, trampling, and succession.

Research on habitat preference is needed to determine why this plant prefers one part of the beach over another.

This grass is most common on the south shore beaches of western Long Island and on the eastern shore of Staten Island. There is one specimen from the late 1800s from the Albany area.

Cenchrus tribuloides occurs mainly along the coastal plain, from Long Island south to Florida and west along the Gulf Coast to Louisiana. There are a few scattered inland populations from Maine to Ohio, Virginia, and Georgia.

Dune Sandspur is a stout, annual grass species. The stems are trailing or decumbent, and up to 1 meter long, with short (up to 14 cm), wide (to 14 mm) leaves and soft-hairy leaf sheaths. There is a single spikelet (occasionally 2) enclosed in a densely hairy bur with from 15 to 40 barbed spines (treacherous to the barefoot), each from 4 to 8 mm long (Gleason and Cronquist 1991).

Dune sandspur may be identified vegetatively, though fruits are best for quick identification. Barefoot dune explorations may result in an unintended, painful discovery of this species.

Cenchrus is our only genus of grass with spiny burs. C. longispinus, our other native sandspur in New York, is much more widespread than C. tribuloides. It has less hairy spikelets with more (45 to 75) spines per bur, and has 2 to 3 spikelets per bur.

Dune sandspur may be seen from June through October.

The time of year you would expect to find Dune Sandspur flowering and fruiting in New York. 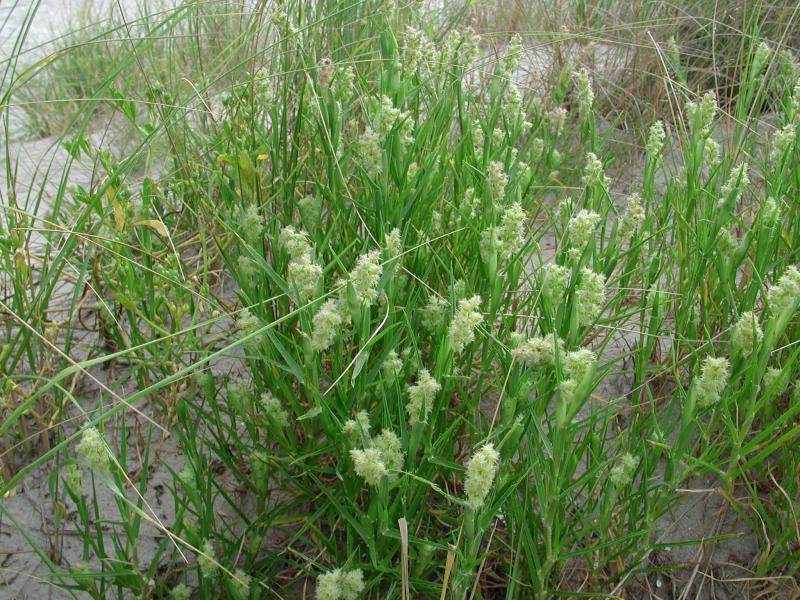