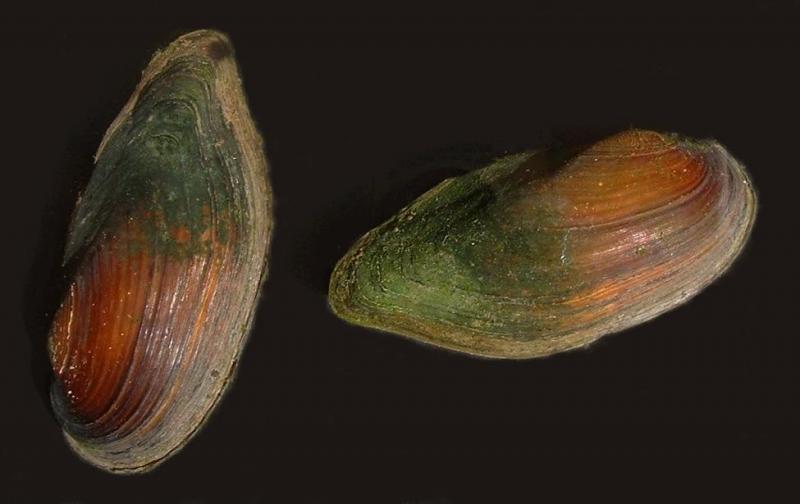 Because of its relatively thin shell, this species has suffered greatly from the zebra mussel (Dreissena polymorpha) invasion (Strayer and Jirka 1997).

This species has been heavily impacted by the zebra mussel invasion in the Hudson River estuary, St. Lawrence River basin, lower Great Lakes and elsewhere throughout the state (Strayer and Jirka 1997). There is some evidence from recent survey effort that it may be rebounding in the St. Lawrence and Great Lakes drainages.

Although not widespread in the state, L. nasuta can still be encountered regularly, and is sometimes abundant (Strayer and Jirka 1997). Average densities in the tidal Hudson River prior to the zebra mussel invasion were 0.08/sq. meter (Strayer et al. 1994), but densities were not reported post invasion. Only 3 individuals of this species were found in a late 1980's survey of 52 sites in many watersheds in the Lake Erie and Ontario basins (Strayer et al. 1991).

This species was once a major component of the lower Great lakes drainage basin, but is now virtually absent owing to the zebra mussel invasion. Ligumia nasuta comprised about 5% of the pre-1960 Unionid records in the lower Great Lakes in Ontario, but dropped to 2.5% of the records post-1960. Between 1930 to 1982 this species was the second most common Unionid in western Lake Erie (Nalepa et al. 1991), but by 1991 it had disappeared (Schloesser and Nalepa 1994). Live animals have been recently documented in 2018 from the St. Lawrence drainage basin in New York. Before that, all records were pre-1970.

The single most important cause of the decline of freshwater mussels during the last century is the destruction of their habitat by siltation, dredging, channelization, impoundments, and pollution. A healthy fish assemblage is critical to viable mussel populations and dams have resulted in heavy losses of mussels, mainly due to elimination of host fish species. Erosion due to deforestation, poor agricultural practices and the destruction of riparian zones, causes an increase in siltation and shifting substrates that can smother mussels. Domestic sewage, effluents from paper mills, tanneries, chemical industries and steel mills, acid mine runoff, heavy metals, and pesticides have all been implicated in the destruction of native mussel fauna. The zebra mussel invasion has dramatically lowered population numbers of this species, particularly in the lower Great Lakes basin (Metcalfe-Smith 1997). Owing to its thin shell, this species appears to be one of those most heavily affected by shell fouling by invasive zebra mussels. Unionids undergo tissue degrowth as a result of starvation, they become top-heavy, tip over and are unable to right themselves. Death is from starvation and complications arising from inproper orientation.

It may be difficult to control the impacts of established zebra mussel populations, but managers can work to prevent the spread of this invasive species to river systems and smaller lakes not yet invaded. The effects of PCB's and other toxic chemicals, and general water pollution, should be investigated for their potential role in the decline of this species. Ligumia nasuta had the highest body burden of PCB's among 6 different mussel species studied by Muncaster et al. (1990), possibly due to its small size. When feasible, the removal of impoundments in order to restore rivers to their natural flow would be beneficial since these structures negatively effect required fish host species as well as the mussels themselves.

There is still much to learn about this species, especially determination of the host fish species. Details about habitat requirements (current speed, water depth, substrate grain size, substrate stability, water temperature, and water quality factors) also need work. However, Strayer et al. (1994) found that the distribution of Unionids was not related to these typical physical habitat qualities, but instead was related to long term stability of the substrate (i.e., flow refuges) and other large-scale habitat variables such as riparian zone vegetation (i.e., grassy vs. forested). Both large and smaller scale forces promoting the patchy occurrence of Unionid mussel beds is an active area of research (Strayer et al. 2004).

The eastern pondmussel appears to be somewhat of a habitat generalist, but it is most often found in quiet waters in estuaries, lakes, canals, or slow streams, and has also been found in the slackwater areas of larger rivers such as the Niagara, as well as in protected areas of small lakes (Clarke 1981, Strayer and Jirka 1997).

Although L. nasuta originated on the Atlantic slope, it has dispersed across much of the state, probably through the Erie Canal. It can be found only sporadically in the Hudson, Delaware, and Housatonic basins and is scattered in the Erie-Niagara drainage, and in central New York. It appears that the species has been lost from the St. Lawrence watershed, since all of the records of live animals are pre-1970 sightings. However, since 1980 the species has been found at three new locations in the Allegheny basin: Chautaqua Lake (most likely introduced through fish stocking), Cassdadaga Creek, and the Chadokin River (Strayer and Jirka 1997).

The shell of the eastern pondmussel is elongate, subelliptical, with a distinct posterior ridge, medium thick, most often < 75 mm long. The posterior end of the shell is drawn out into a well defined blunt point near the midline of the shell. Its beak sculpture is double-looped, the periostracum dark, green to brown, sometimes with fine rays over the posterior part of the shell. Its hinge teeth are well-developed, sharp and delicate; the nacre is a bluish to creamy white (Strayer and Jirka 1997) .

The long shell, with its distinctive posterior end, makes this species easy to recognize (Strayer and Jirka 1997).

Adults of this species are sessile with only limited movement in the substrate. Passive downstream movement may occur when they are displaced from the substrate during floods. More major dispersal occurs while glochidia are encysted on their as yet, unknown host(s). Being ectothermic, activity levels of mussels are presumably reduced greatly during colder months of the year. Gravid females of Ligumia display marginal papillae to attract fish hosts for their parasitic larvae. The moving displays attract fish (bass, sunfish, darters), which readily attack displaying females, causing them to release glochidia onto the gills of the fish. These displays slow in low light and stop in the dark, so highly turbid waters may affect the reproductive biology of this species (Corey et al. 2006).

Adult mussels are filter feeders. Algae, detritus and bacteria are all important food sources. Mussels in turn are eaten by muskrats, raccoons, fish, and birds. The glochidial (larval) host fish species has not been determined, but several Centrachid (sunfish) species as well as bass seem to be suitable (Strayer and Jirka 1997, Corey et al. 2006).

Little is known about the activity periods of Unionid mussels but they are presumed to be greatly reduced during cold times of the year. Freshwater mussels are most often easiest to locate during late summer when water levels are lowest. This species breeds from August until the following June (Clarke 1981).

The time of year you would expect to find Eastern Pondmussel active and reproducing in New York.

Information for this guide was last updated on: June 22, 2007