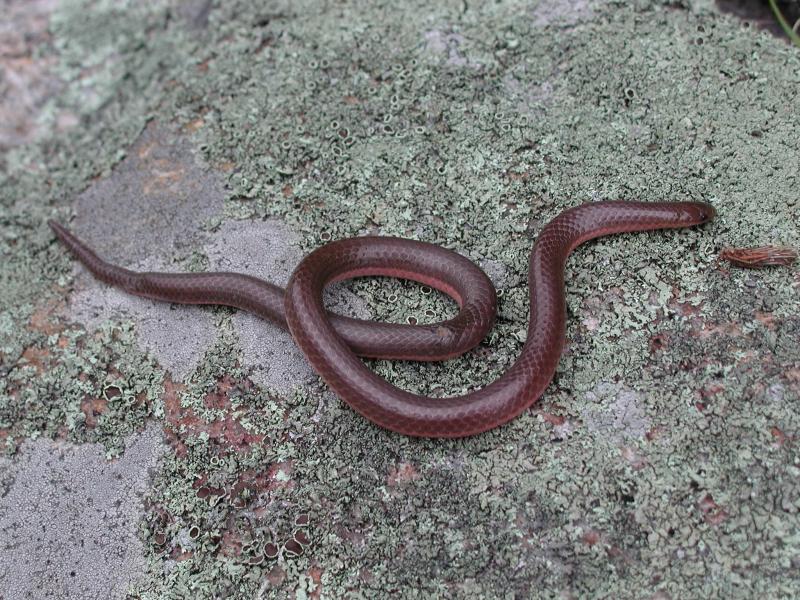 In addition to resembling a worm in size and color, wormsnakes also feed on earthworms (and other small prey).

This is a secretive species that appears to be fairly local within its state range, with fewer than 20 occurrences known. Only twelve records were reported between 1990 and 1999 within seven topographic quadrangles, despite a fairly intensive survey effort during the New York State Department of Environmental Conservation Amphibian and Reptile Atlas Project.

The species may be decreasing where it occurs, but additional data on short-term trends is needed.

The long-term trends are unknown, but habitat loss in areas where wormsnakes have been known to occur is documented and this has likely contributed to the loss of, or reduction of, populations in these localities.

Threats include habitat loss and fragmentation. Pesticides may also be a threat and Ernst (1962) reported wormsnake mortality from an application of 6% chlordane dust applied to the soil for insect control (Klemens 1993). Additional research on threats is needed.

Mitigation measures to manage the adverse effects of habitat fragmentation need to be developed and implemented (New York State Department of Environmental Conservation 2006).

Standardized survey protocols need to be developed and, once complete, these protocols should be implemented at known and potential habitats in order to determine the character, quality, and full extent of the occupied habitat (New York State Department of Environmental Conservation 2006). Life history parameters of wormsnake populations in New York need to be determined. This includes collecting information on age and sex ratios, longevity, age at sexual maturity, survivorship of young, predator-prey relationships, and specific habitat requirements (New York State Department of Environmental Conservation 2006).

Although little specific habitat data exists for this species (Ernst et al. 1997 in Orr 2006), wormsnakes are reported to live in moist (mesic) forests (Gibbs et al. 2007, NatureServe 2007) and drier forests may also be inhabited (McLeod and Gates 1998). This species is often found under rocks, bark slabs, logs, leaves, or other forest litter in a variety of habitats (Barbour 1960 in Orr 2006), often along edges or ecotones (NatureServe 2007). In southern New York, particularly in the Hudson Highlands, it may be found in or near rocky summit communities or similar habitats (e.g., powerline right-of-ways through deciduous forest). It is likely present in the forests surrounding these areas, but additional habitat data is needed. Wormsnakes are also found in sandy areas, such as dry pitch pine habitats on Long Island and in the Albany Pine Bush.

This species is currently known from eight of 57 counties, although the range within these counties is likely to be restricted. The range includes Long Island, the lower Hudson Valley, including the Hudson Highlands east and west of the Hudson River, and the Albany Pine Bush.

The global range extends from Illinois, Indiana, Ohio, Pennsylvania, southeastern New York and Massachusetts, south to Louisiana, Mississippi, Alabama, Georgia, and South Carolina, west to the Mississippi River and just west of the Mississippi in the vicinity of eastern Arkansas, and east to the Atlantic coast. There is an old record from west-central Florida (Ernst et al. 2003). The elevational range extends to at least 1,311 meters (4,300 feet) in North Carolina (Palmer and Braswell 1995).

The adult and young differ in length, but are similar in appearance and are easily identified.

The fossorial behavior of the wormsnake makes the chances of finding this species on the surface very rare (Gibbs et al. 2007) and locating wormsnakes usually involves looking underneath various cover items, such as rocks and logs. When handled, wormsnakes may attempt to burrow between your fingers (Gibbs et al. 2007). The species is reported from moist forests, as well as from drier habitats (McLeod and Gates 1998), and Orr (2006) determined that microhabitat soil moisture in wormsnake habitat ranged from 10% to 83% in Virginia, depending upon the season and year. Wormsnakes are susceptible to water loss through their skin and may burrow deep into the soil and become inactive during the hot summer months (Gibbs et al. 2007). Orr (2006) suggested that the distribution of wormsnakes is probably influenced by soil pH, at least at his study site in Virginia, and he found that the pH range in wormsnake habitats (5.0 to 6.9) was similar to the preferred range of the wormsnake's primary prey, the earthworm. The limits of pH tolerance of the wormsnake have not been identified, however (Orr 2006). Reports on clutch size vary, but appear to range between two and eight eggs. The eggs are probably laid in depressions under boulders or in hollow logs, likely from mid to late June (Klemens 1993) or early July. Hatching dates of eastern wormsnakes in the literature were summarized by Clark (1970), and these dates ranged between the beginning of August to mid-September and it is likely that hatching in New England and eastern New York occurs during this time (Klemens 1993). Wormsnakes have relatively small home ranges (NatureServe 2007) and the average home range size in Kentucky is reported to be 253 square meters (0.06 acres). They hibernate in rotting wood or underground, often in burrows of other animals, and they may be active both night and day (Clark 1970 in Klemens 1993).

Wormsnakes feed primarily on earthworms and soft-bodied insects (Barbour 1960). The diet is restricted to elongated prey, due to the small size of the mouth (Gibbs et al. 2007).

The time of year you would expect to find Eastern Wormsnake present and reproducing in New York. 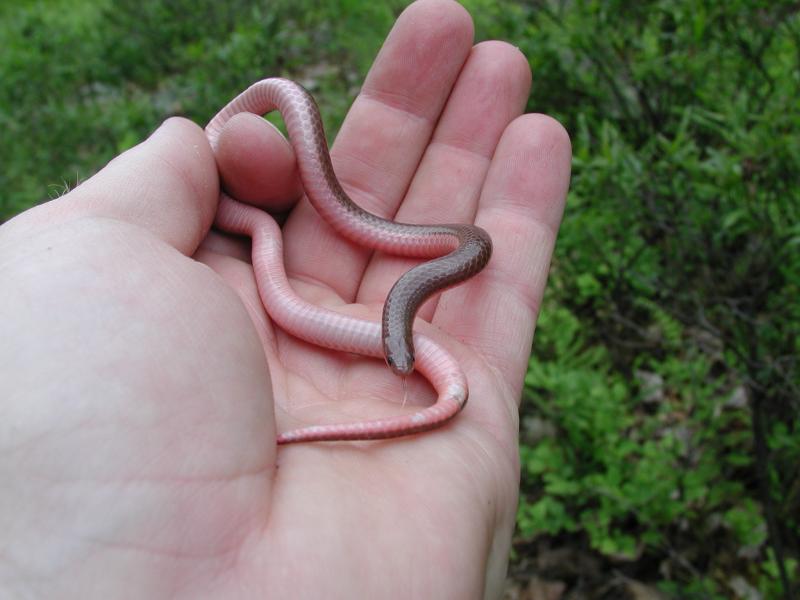 Barbour, R.W. 1960. A study of the worm snake, Carphophis amoenus, Say in Kentucky. Transactions of the Kentucky Academy of Science 21: 10-16.

Klemens, M.W. 1993. Amphibians and Reptiles of Connecticut and Adjacent Regions. State Geological and Natural History Survey of Connecticut, Bulletin No. 112.

Information for this guide was last updated on: January 10, 2011