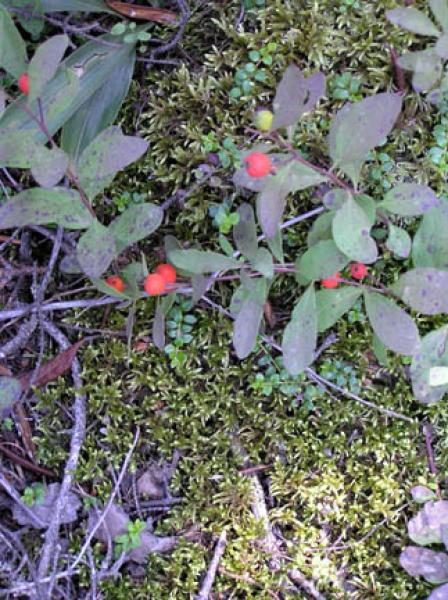 This plant is part of the mostly tropical sandalwood family. The genus name Geocaulon is from the greek ge, earth, and caulos, stalk and is in reference to the long slightly subterranean but scarcely modified stems (Fernald 1970). Geocaulon species are hemi-parasites: that is, although they do produce their own food using chlorophyll like other green plants , they also obtain some nutrients by penetrating the roots of other plants.

There are 8 known and about 4 historical (not seen within 20 years) populations in New York State. Two of the historical populations were searched for without success, but more survey work is needed at these sites before they can be determined extirpated. All of the populations are limited to the highest mountains in the high peaks region of the Adirondacks and most are quite small. Some of the populations are threatened by trampling by hiker traffic. This species is at the edge of its range in New York, where the cool alpine habita it requires is very limited in distribution.

Most of the populations in New York were first seen within the past 20 years. This most likely is a result of these populations being overlooked due to the fact that this species is fairly inconspicuous and often grows in relatively small numbers. Most populations have under 100 individuals but there is no evidence that this is a result of declining populations.

Trampling by hiker traffic is a threat to some of the populations.

Consistent and clear estimates of population size are needed for all extant populations. The known populations of this species are small enough that counting of all stems is very possible. Populations which have not been seen recently need to be surveyed.

In New York, Geocaulon lividum is restricted to some of the highest mountains in the high peaks region of the Adirondacks. All the populations are within about 14 air miles from each other.

This species occurs from Labrador to Alaska south to Maine, the mountains of northern New England and New York, Michigan, Minnesota, and southern British Columbia (Fernald 1970).

Purple comandra is a small herbaceous plant. It has creeping roots and erect simple stems that grow up to about one foot tall. The .4 - 1.6 inch long leaves are alternate on the stems. The flowers occur in clusters of 2-4 from axils of the leaves. They lack true petals but have a 5-lobed calyx with the lobes bronze to greenish. Only the central flower of a cluster has female reproductive parts and is able to produce fruits. The other flowers have only male reproductive parts. The beautiful orange to scarlet fruits are round, juicy, and 6-10 mm in diameter (Fernald 1970, Gleason and Cronquist 1991).

Geocaulon lividum often occurs in relatively small patches with the stems widely spaced. The stems are 7-30 cm tall. The creeping roots are smooth, filiform, and brown or reddish. The leaves are distinctive. They are 1-4 cm long, rounded at the apex, elliptic to oblong or narrowly ovate, and tinged or completely purplish to purplish-brown. The flowers occur in solitary clusters of 2-4 from the axils of the leaves in the middle of the stems. Only the central flower is perfect and develops into a scarlet fleshy fruit on a peduncle 1-2 cm long. These fruits are somewhat hidden by the leaves (Fernald 1970).

Geocaulon lividum is a very distinct plant and is not easily confused with any other species in New York's alpine habitats. Its flowers and to some degree fruits are somewhat inconspicuous. Individual stems often are without flowers. Therefore, as a simple-stemmed small herb that often grows singly or only in small groups, with stems widely spaced, it can be difficult to spot. Finding this species requires keen observation and familiarity with its vegetative characteristics.

Comandra umbellata, bastard-toadflax, looks similar vegetatively but occurs in lowland dry forests and barrens, and has many white flowers at the top of the stem.

The best time to survey for this species is when it is in fruit and it is most visible, which is from mid-July through September.

The time of year you would expect to find False Toad Flax flowering and fruiting in New York.

Fernald (1928) transferred Comandra livida to the monotypic genus Geocaulon due to many morphological differences between the two genera.