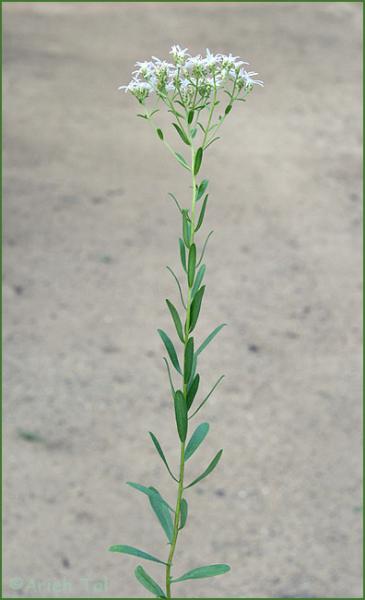 Formerly known as Aster solidagineus, this is one of the few rare plants where both the name of its genus and species has changed. Both of its species names are descriptive; it has narrow leaves (linifolius) and it does have a goldenrod shape (solidagineus). Its new genus means silky-fruited.

There are seven existing populations but only three of them have more than 100 plants, and they occur in human-disturbed areas that are not managed for this species. More occurrences will likely be found since its habitat is common on Long Island. There are 18 additional historical occurrences and about one third of these are considered extirpated.

The short-term trend of the existing populations seem stable as long as favorable disturbance continues.

The long-term trend is apparently negative. This species has always been rare in New York, but population numbers were probably higher in the past when larger expanses of grassland occured on Long Island. There may be just as many populations existing today, but with smaller numbers of plants in grassland remnants.

Improper maintenance of successional grasslands where it grows can lead to succession and a loss of plants to competition. Too much direct disturbance during the growing season may also reduce numbers of plants.

Research is needed to determine both the soil conditions that favor this plant in remnant grasslands, and whether existing populations can be augmented.

In New York, this species has been found in openings within pine barrens communities, often growing along roadsides, railroads, or in other disturbed areas. Dry to moist sandy, clay, and gravelly soils of open deciduous and pine woods, oak and pine barrens, roadsides, fields (FNA 2006). Dry woods and open ground (Gleason and Cronquist 1991). Dry woods, thickets and clearings (Fernald 1970).

This plant only grows on Long Island.

It grows in the eastern United States from Indiana south to Louisiana and east to Georgia, New York, and Southern New England.

Flax-leaf Whitetop is a perennial, stout aster species growing up to 75 cm tall. Its leaves are linear, glabrous, and entire, up to 1 cm wide and 8 cm long. The basal and lower leaves wither by flowering time. The capitulescence is flat-topped, with 2 to 4 heads per branch. The phyllaries (the bracts of the involucre beneath each head) are white with a distinct green patch, and spreading. The flowers have 2 to 6 white ray flowers up to 1 cm long, and 5 to 15 white disc flowers up to 4 mm long.

Flowers or fruits are needed to positively identify Flax-leaf Whitetop.

The only other species of Sericocarpus in New York is S. asteroides, which has (at least some) toothed stem leaves, differing from the entire leaves of S. linifolius. The combination of linear and entire stem leaves, flat-topped capitulescence, and recurved, glabrous, green-tipped phyllaries should also distinguish this species from those of other aster genera.

The best time to identify this plant is in July through September.

The time of year you would expect to find Narrow-leaved White-topped Aster flowering and fruiting in New York.

Information for this guide was last updated on: June 18, 2013