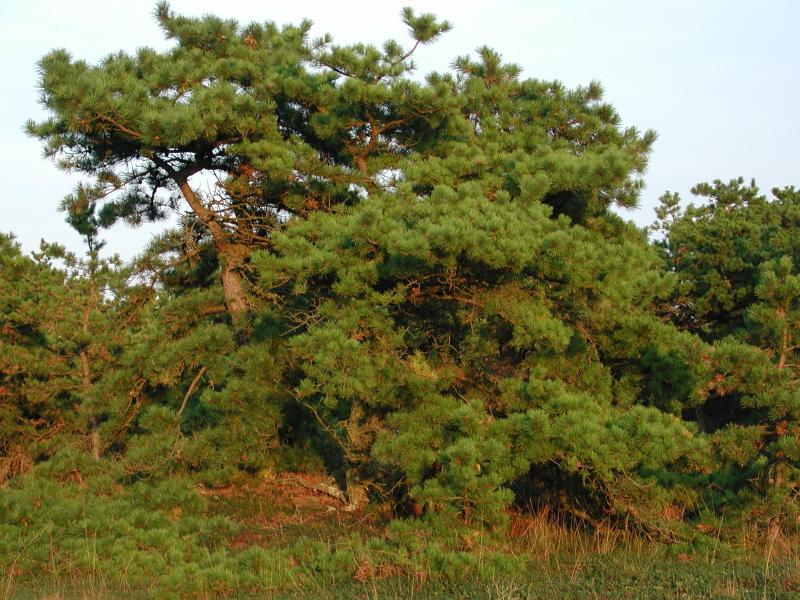 Pitch pine (Pinus rigida) is a highly fire resistant and dependent tree, but within the maritime pitch pine dune woodland, fires are rare due to the sandy substrates and probably not necessary to maintain the natural community. The harsh climate combined with persistent high winds and salt spray makes conditions inhospitable for many plants. However, even though winds and salt spray continually prune the tops of pitch pines, the tree adapts by growing prostrate, or horizontally. It has very thick bark and has the ability to sprout branches from the bole and base of the tree following a major disturbance. Pitch Pines are also very adaptive to growing in thin sandy soils.

There are very few occurrences of maritime pitch pine dune woodlands statewide. This natural community occurs only on the more stable backdunes (parabolic dunes) near the ocean. The total acreage is correspondingly low and it is vulnerable to disturbance. The community has probably showed a steady decline since the area was first settled. Presently, off-road vehicles (ORV), trampling, trails, and dirt (sand) roads are causing additional erosion and disturbance.

The numbers and acreage of maritime pitch pine woodlands have been declining slightly in recent decades. Currently, most of this natural community occurs on protected land.

The numbers and acreage of maritime pitch pine woodlands declined from historical numbers likely correlated with settlement and agricultural, commercial, and residential development.

The major threats to maritime pitch pine dune woodlands are development, increase in sand roads and trails for access to adjacent beaches, and invasive species. Development pressures on this community include residential, commercial, and recreational (golf courses). These types of development not only reduces the size of the forest block but causes the fragmentation of the forest into smaller units. Sand roads and an increase in off-road vehicle traffic can also cause this fragmentation but can also cause trampling and an increase in erosion. These new corridors can also lead to an increase in invasive species. Another threat to this community is deer browse. Deer typical will nip off new tree growth (saplings) thereby impacting the regeneration of the tree canopy species. Southern pine beetle (Dendroctonus frontalis) is a bark beetle that infests pine trees, such as pitch pine, white pine, and red pine. Southern pine beetle is native to the southeastern United States, but its range has spread up the east coast to Long Island, New York in 2014. Natural communities dominated or co-dominated by pines would likely be most impacted by southern pine beetle invasion.

Management activities should include the development and implementation of a comprehensive plan to ensure landscape integrity. Fragmenting features such as roads and unnecessary trails should be reduced or minimized, and high-impact activities, such as the use of mountain bikes and ATVs, should be restricted.

Soils are sandy in and around this natural community and the effect of clearing and construction on soil retention and erosion must be considered during any development activities. Similarly, these sandy soils are nutrient-poor and any soil enrichment activities (septic leach fields, fertilized lawns, etc.) have a high probability of altering community structure and function.

Survey for more occurrences along the coast. Collect additional plot data to document and confirm the classification of this community type. Remapping using better, digital orthophotos also needs to be done along with field validation.

Research is needed to better define the composition of this community on Long Island. Collect sufficient plot data to support this classification.

Maritime pitch pine dune woodlands are currently known only from Suffolk County, Long Island. This natural community only occurs on the coast specifically on the backdunes that are more stabilized than foredunes.

A variation of this type of natural community may occur in various locations worldwide. Journal articles have been found describing maritime pine barrens in Spain, for example. This particular assemblage of species occurs along the North American Atlantic Coast in Delaware, Maine, Massachusetts, New Jersey and New York. This maritime woodland community is restricted to major coastal sand dune systems.

A maritime woodland that occurs on stabilized parabolic dunes. The substrate is wind and wave deposited sand that is usually excessively well-drained and nutrient poor. The community is subject to high winds, sand-blasting, salt spray, and shifting substrate. Trees are somewhat stunted and salt pruned. The canopy is sparse with some openings. Pitch pine (Pinus rigida) is the dominant tree and may have lower branches that grow out horizontally like aprons.

Known examples of this community have been found at elevations between 5 feet and 100 feet.

Late spring and summer are probably the best times to see this natural community when beach weather is at its best and when early morning choruses of birds such as Prairie Warbler (Dendroica discolor) and Field Sparrow (Spizella pusilla) fill the air. 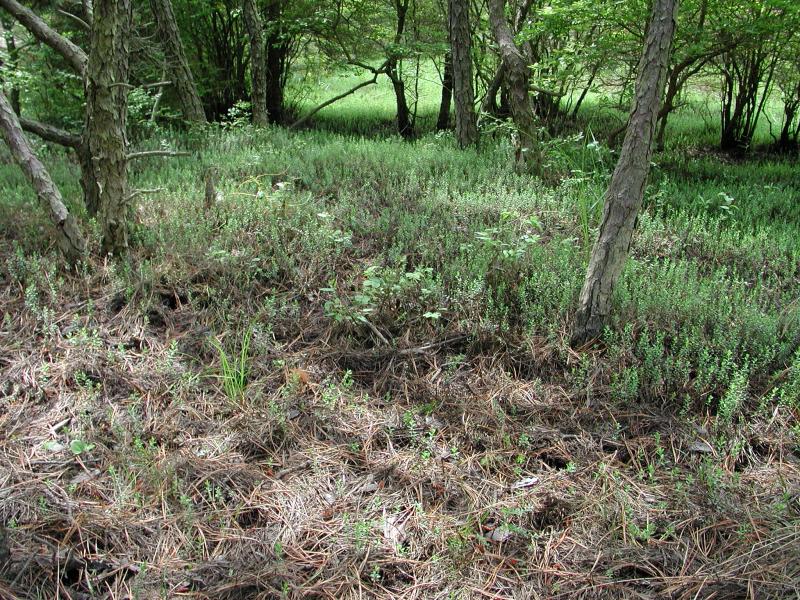 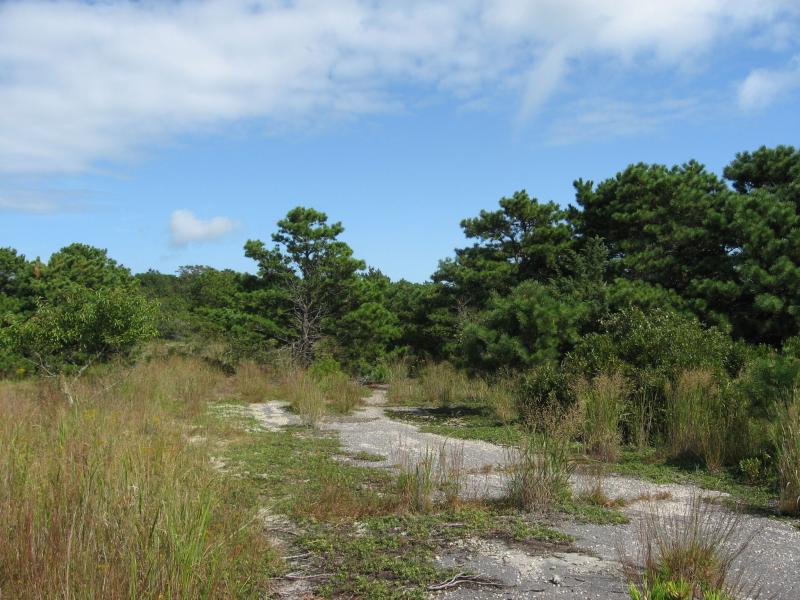 This figure helps visualize the structure and "look" or "feel" of a typical Maritime Pitch Pine Dune Woodland. Each bar represents the amount of "coverage" for all the species growing at that height. Because layers overlap (shrubs may grow under trees, for example), the shaded regions can add up to more than 100%.