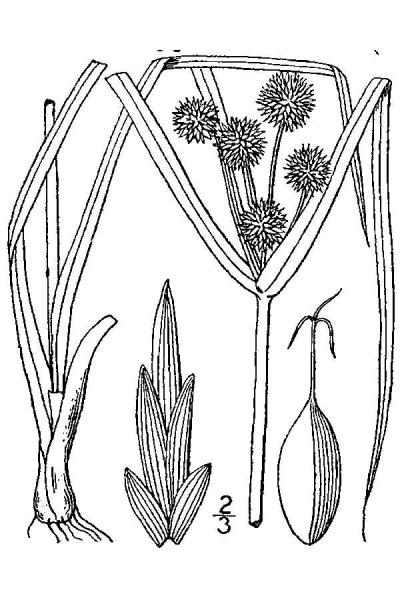 In New York this flatsedge has only ever been collected around the New York City area, mostly in the late 1800s and early 1900s. It was seen a few times after World War II up until 1950, but not collected again until the 1980s in the serpentine areas of Staten Island. These records represent the most northern extension of the species along the Atlantic coast.

There are currently believed to be five existing populations, but two of them have not been seen since the 1980s and may have been shaded out by natural succession. They may still persist in the seed bank. Only one population has more than 100 plants. There are two old records from Staten Island which have not been resurveyed and there are nine more records which are now considered extirpated.

Short-term trends appear stable although a couple of populations are probably present only in the seed bank, waiting for a disturbance to facilitate germination.

This plant has declined severely over the last 100 years because of the development of New York City, especially on Staten Island where it was once considered relatively common. Remaining populations are small and long-term trends will probably continue downward.

Current populations are threatened by direct human disturbance from development and subsequent human use of nearby natural areas where plants are trampled. Lack of management has also allowed succession to eliminate the vegetative stems of two populations although they may still be in the seed bank.

Research is needed to understand habitat requirements and management practices to protect and augment populations.

This species is known from the New York City area where it is currently known from the Bronx and Staten Island but considered extirpated from Manhattan and Queens. There is also one historical record from the Yonkers area of Westchester County which is probably also extirpated.

This flatsedge is most common from southeastern Pennsylvania south to northern Florida and west to Texas, Missouri, and Kansas. It reaches its northeastern range limit in southern New England and New York. There are a few disjunct populations from central Wisconsin, northern Illinois, Ontario, and in northern Ohio. It also occurs in the West Indies.

Globose Flatsedge is a grass-like perennial herb, growing singly or in loose clumps, and up to 30 to 100 cm tall. Its stems are 3-sided and smooth. The leaves are flat or V-shaped, 3 to 9 mm wide, with rough edges. The infloresence is exceeded by the lowest bract, and consists of 1 or 2 sessile, terminal round or egg-shaped spikes, each with 3 to 12 ascending rays. Each spike in turn contains many spikes, radiating in all directions, each with 1 to 3 flowers subtended by persistent straw-colored to brownish scales 3 to 7.5 mm long. The fruit are brown, pitted, oblong achenes, about half as long as the flower scales (FNA 2002, Gleason and Cronquist 1991).

Entire plants with mature fruit are needed for identification.

Globose Flatsedge's fruits mature in late July and may persist through September.

The time of year you would expect to find Globe Flat Sedge fruiting in New York.