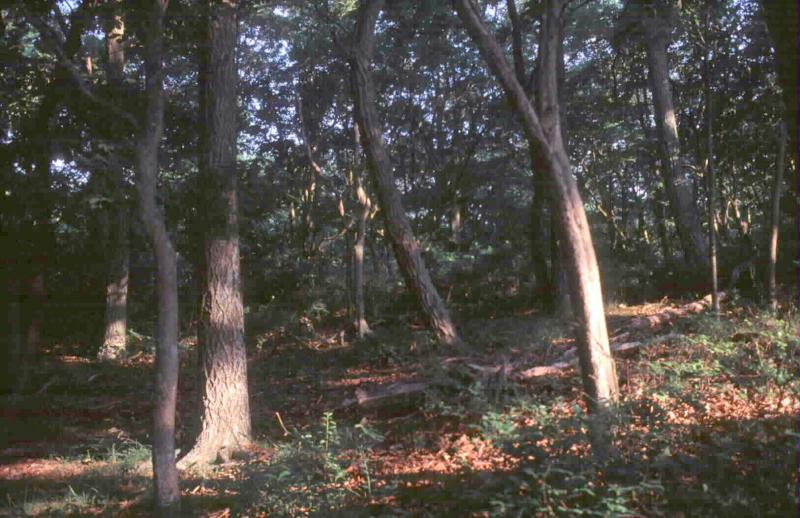 There are less than 10 documented occurrences statewide. These occurrences have good viability and are protected on private or public conservation land. The community is restricted to interior portions of coastal lowlands in Suffolk and possibly Nassau Counties and is concentrated on knolls and mid to upper slopes of moraines. The acreage, extent, and condition of coastal oak-hickory forests in New York is suspected to be declining.

The acreage, extent, and condition of coastal oak-hickory forests in New York is suspected to be declining due to fragmentation and extirpation from residential and commercial development, heavy deer browse, and invasive species.

The number, extent, and viability of coastal oak-hickory forests in New York are suspected to have declined substantially over the long-term. These declines are likely correlated with the settlement of Long Island and the subsequent residential, agricultural and commercial development.

The threats to the coastal oak-hickory forest are many and varied: displacement of the community by commercial and residential development; invasive species; roads and trails causing forest fragmentation and erosion; and deer browse. Some of the invasive species that have been observed in the forest include Japanese barberry (Berberis thunbergii), Black locust (Robinia pseudo-acacia), bittersweet (Celastrus orbiculatus), garlic mustard (Alliaria petiolata) and multiflora rose (Rosa multiflora). Deer browse on seedlings and saplings are causing a loss of forest canopy regeneration.

To promote a dynamic forest mosaic, allow natural processes, including gap formation from blowdowns and tree mortality, as well as, in-place decomposition of fallen coarse woody debris and standing snags, to operate, particularly in mature and old growth examples (Spies and Turner 1999). Management efforts should focus on the control or local eradication of invasive exotic plants and the reduction of white-tailed deer densities. Consider deer exclosures or population management, particularly if studies confirm that canopy species recruitment is being affected by heavy browse. Generally, management should focus on activities that help maintain regeneration of the species associated with this community. Deer have been shown to have negative effects on forest understories (Miller et al. 1992, Augustine and French 1998, Knight 2003) and management efforts should strive to ensure that tree and shrub seedlings are not so heavily browsed that they cannot replace overstory trees. If active forestry must occur, use silvicultural techniques and extended rotation intervals that promote regeneration of a diversity of canopy, subcanopy and shrub species over time (Busby et al. 2009) while avoiding or minimizing both short-term and persistent residual disturbances such as soil compaction, loss of canopy cover due to logging road construction, and the unintended introduction of invasive plants.

Fragmentation of coastal forests should be avoided. It is also important to maintain connectivity with adjacent natural communities, not only to allow nutrient flow and seed dispersal, but to allow animals to move between them seasonally. Strive to minimize fragmentation of large forest blocks by focusing development on forest edges, minimizing the width of roads and road corridors extending into forests, and designing cluster developments that minimize the spatial extent of the development. Development projects with the least impact on large forests and all the plants and animals living within these forests are those built on brownfields or other previously developed land. These projects have the added benefit of matching sustainable development practices (for example, see: The President's Council on Sustainable Development 1999 final report, US Green Building Council's Leadership in Energy and Environmental Design certification process at http://www.usgbc.org/). A cross-section of coastal oak-hickory forest occurrences should be protected, including the largest ones, the most mature ones, and the ones in the best landscape block.

Survey for additional large examples in central to western Suffolk County. Some leads to follow up on include Caleb Smith State Park, Wildwood State Park, and Butler-Huntington Preserve among others.

A critical assessment of the long-term effects of heavy deer browse on this community, particularly addressing oak and other canopy species seedling recruitment, is needed.

Coastal oak-hickory forests are restricted to the coastal lowlands in Suffolk and possibly Nassau Counties. They are concentrated on knolls and mid to upper slopes of glacial moraines. The range of this community possibly extends westward into northeastern Nassau County and on the end moraine of western Long Island (Greller 1977).

This natural community occurs along the coast from Maine to Maryland. This community is similar to the mesic coastal plain mixed oak forest of New Jersey.

Known examples of this community have been found at elevations between 4 feet and 150 feet.

Early spring is a good time to catch many of the understory trees and shrubs in bloom. Flowering dogwood and maple-leaf viburnum provide visual sprays of color in the spring. Mid to late summer is a good time to snack on ripening blueberries and huckleberries. 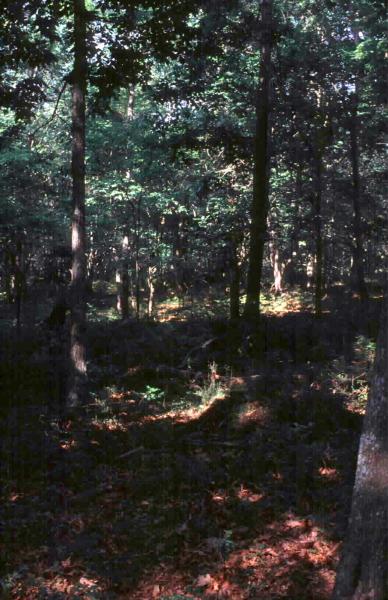 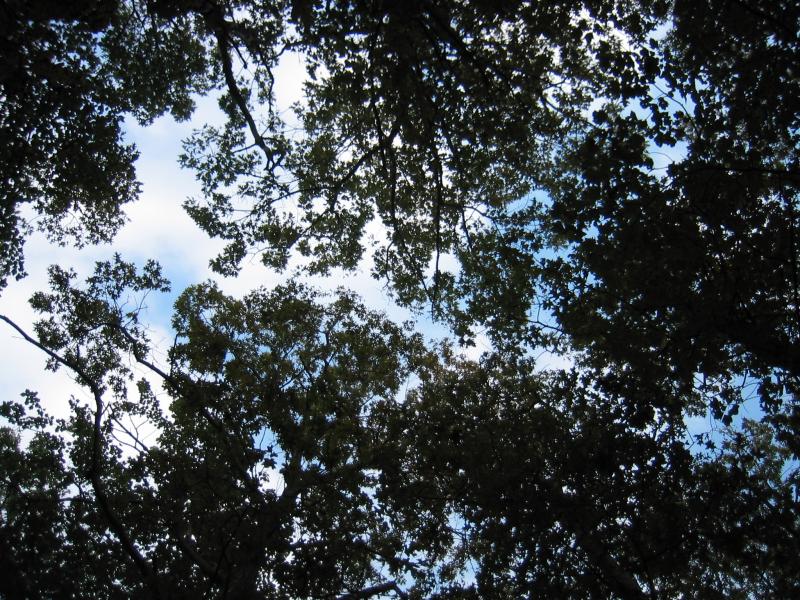 This figure helps visualize the structure and "look" or "feel" of a typical Coastal Oak-Hickory Forest. Each bar represents the amount of "coverage" for all the species growing at that height. Because layers overlap (shrubs may grow under trees, for example), the shaded regions can add up to more than 100%.