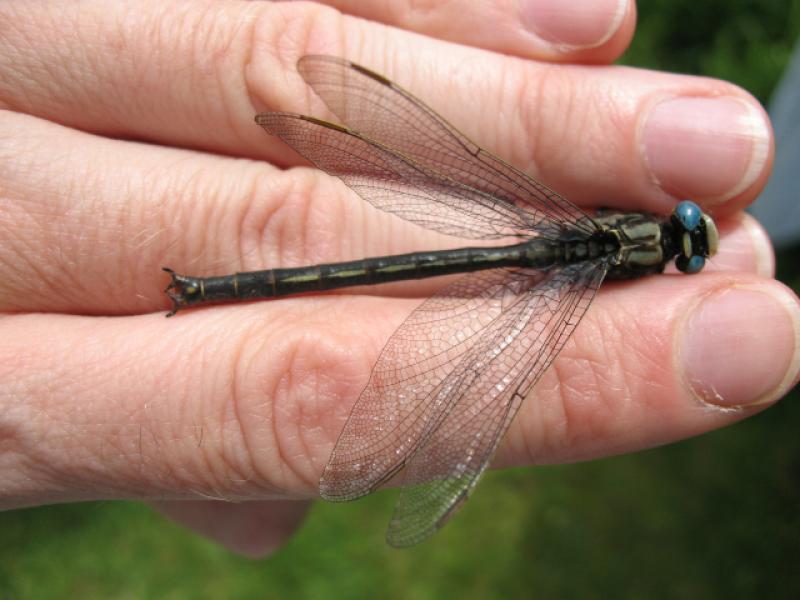 Horned clubtail is known from only a handful of sites in St. Lawrence County and probably recently colonized across the St. Lawrence River from nearby populations in Ontario, Canada, forming the extreme eastern range boundary of this upper Midwestern species.

This species was newly discovered in the state in 2006 during the New York Dragonfly and Damselfly Survey (White et al., 2010).

This clubtail seems to be expanding its range eastward through the Great Lakes, as new sites continue to be discovered in the general vicinity of the initial St. Lawrence County find by Trybula (2006).

Land use practices which might damage shoreline vegetation and floating/emergent vegetation at breeding waters could make the habitat less suitable. Also, run-off from surrounding lands that might lead to lower dissolved oxygen, such as fertilizers, could also reduce favorable larval conditions.

Practices such as natural forested buffers that promote shoreline integrity and healthy stands of native emergent and floating vegetation should serve to benefit populations of this species.

Suitable habitats in Jefferson County and further to the east in the lowlands of Franklin and Clinton Counties should be surveyed to determine if this species is actively expanding its range.

This species is found at small marshy ponds and lakes, slow streams, and rivers with mucky bottoms and floating plants.

Thus far the Horned clubtail has only been found in the plains and foothills of central St. Lawrence County.

It ranges from eastern Wyoming through southern Manitoba to Quebec, southwest through extreme northern New York to Indiana and Iowa.

The large and broad male claspers are distinctive and often visible in the field with binoculars. Females have "horns" (small protuberances) behind the eyes.

Like other Arigomphus, this wary species often lands on floating plants or on rocks jutting from the water, often just out of reach.

The larvae are generalist predators, while the adults feed on flying insects.

In New York, this species is active and on the wing for about a month, from May 21 to June 21.

The time of year you would expect to find Horned Clubtail reproducing and larvae present and active in New York.

Jones, C.D., A. Kingsley, P. Burke, and M. Holder. 2008. The Dragonflies and Damselflies of Algonquin Provincial Park and the surrounding area. Friends of Algonquin Park, Whitney, ON.

Information for this guide was last updated on: March 30, 2017