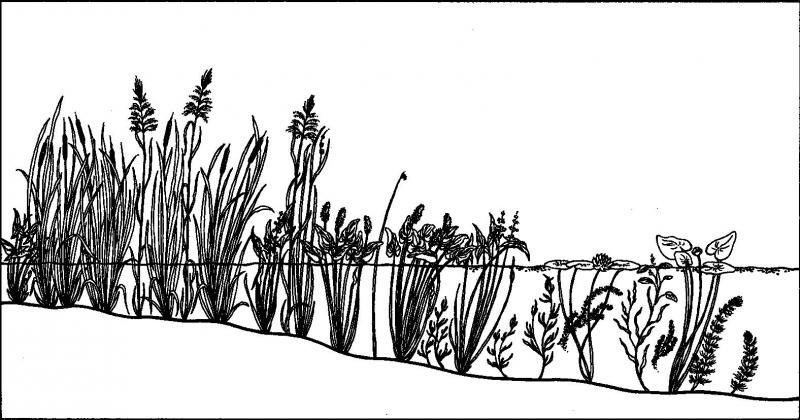 A characteristic species found in deep emergent marshes is wild rice (Zizania aquatica and Z. palustris). In addition to providing habitat and food for marsh fish and waterfowl, wild rice has been an important food staple for Native Americans for thousands of years. The ancestral grain of wild rice has even been found in layers of earth dating back 12,000 years! Today, about 23 million pounds of "wild" wild rice varieties as well as "cultivated" wild rice varieties are produced each year around the world, 4 million of which is considered "wild" grown.

There are several thousand occurrences statewide. Some documented occurrences have good viability and many are protected on public land or private conservation land. This community has statewide distribution, and includes a few large, high quality examples. The current trend of this community is probably stable for occurrences on public land, or declining slightly elsewhere due to moderate threats that include alteration of the natural hydrology and invasive species.

Emergent covertype acreage and relative abundance appeared to decline slightly statewide (Huffman & Associates, Inc. 2000). There may be a few cases where this community has increased as a result of flooding from impoundments.

The number and acreage of deep emergent marshes in New York has substantially declined (50-75%) from historical numbers likely correlated to the alteration of the natural hydrology and/or direct destruction.

This community currently ranges across the northern half of New York where it is often associated with large rivers or lakes. Several deep emergent marshes are known from the St. Lawrence and Lake Champlain Valleys. A few examples are known from the eastern shore of Lake Ontario, the central Adirondacks, the Taconic Mountain Foothills, and the Niagara River in western New York. Emergent wetlands are relatively uncommon, accounting for only 10 percent, or about 239,000 acres, of the freshwater wetlands statewide in the mid-1990s. Emergent wetland as a covertype is most common in the Appalachian Highlands and Hudson Valley, where it accounts for about 11.5 percent of all wetlands. Emergent wetlands are the least common covertype in the Lake Plains and Coastal Lowlands, where only 8 percent of all wetlands are emergent (Huffman & Associates, Inc. 2000).

This broadly-defined community is widespread throughout the eastern United States. Examples with the greatest biotic affinities to New York occurrences are suspected to span north to southern Canada, west to Minnesota, southwest to Indiana and Tennessee, southeast to Georgia, and northeast to Nova Scotia.

A marsh community that occurs on mineral soils or fine-grained organic soils; the substrate is flooded by waters that are not subject to violent wave action. Water depths can range from 15 cm to 2 m (6 inches to 6.6 feet); water levels may fluctuate seasonally, but the substrate is rarely dry, and there is usually standing water in the fall. Deep emergent marshes are quite variable. They may be codominated by a mixture of species or have a single dominant species.

A community of non-woody plants growing out of water, where the water remains year-round. Typical examples of deep emergent marshes are dominated by cattail (Typha spp.). They tend not to be very floristically diverse and are continuously flooded throughout the year.

Known examples of this community have been found at elevations between 90 feet and 1,716 feet.

An exciting time to visit this type of marsh is in spring (end of April and on) when the red-winged blackbirds have returned to nest. The males perch on the tallest emergent vegetation and call to attract mates and defend their territories. 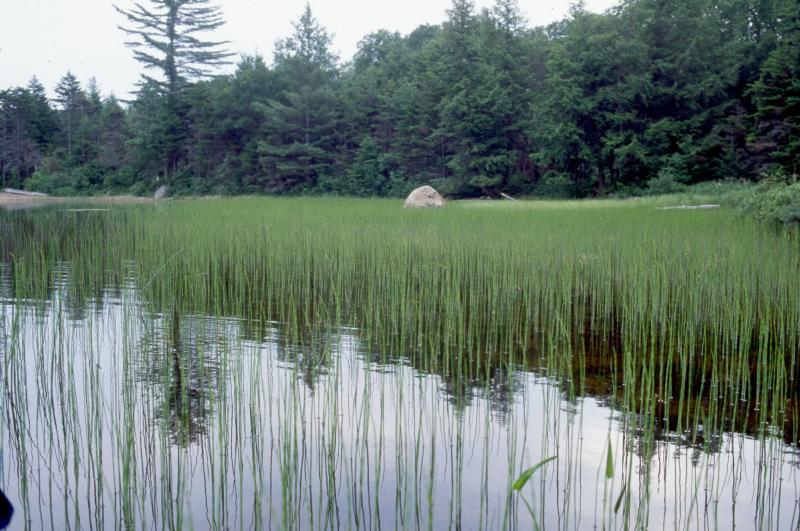 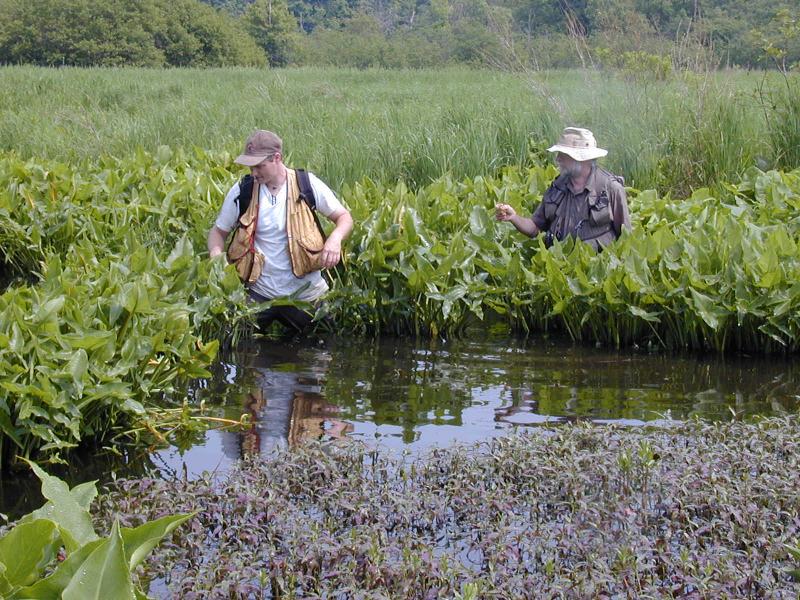 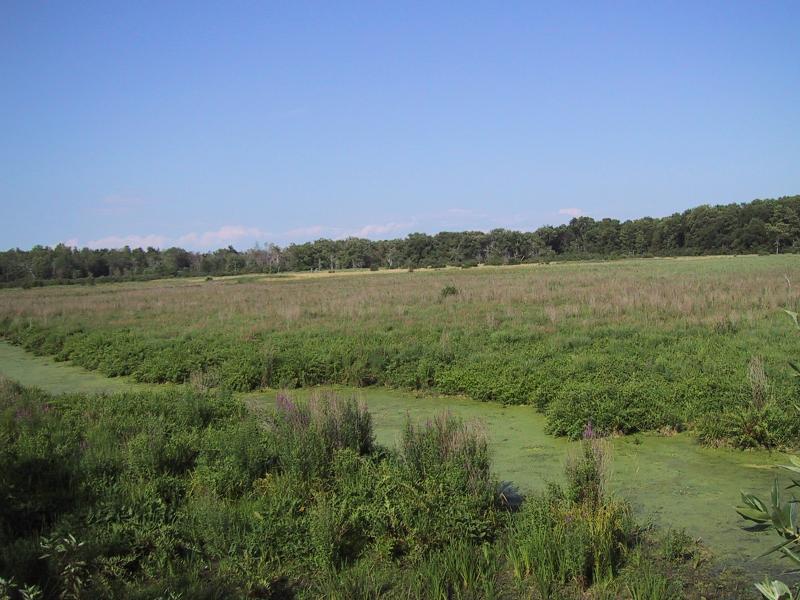 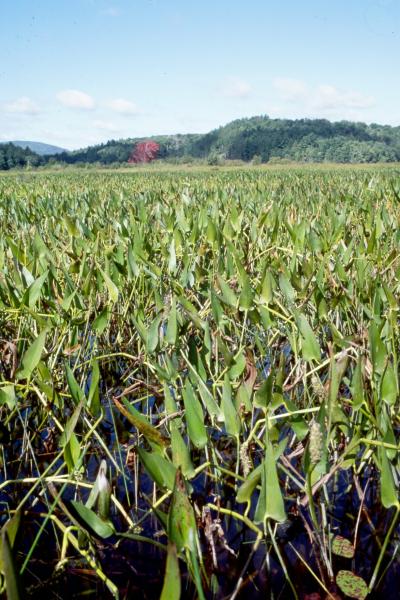 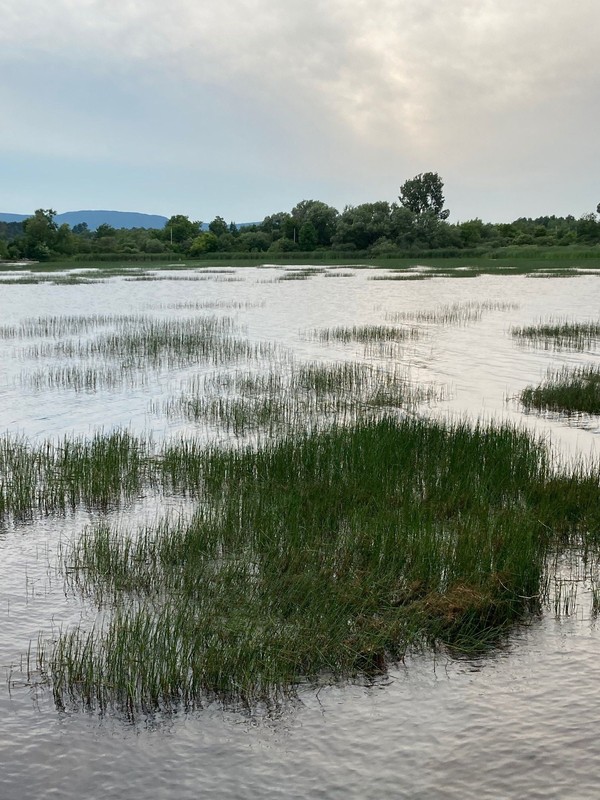 This figure helps visualize the structure and "look" or "feel" of a typical Deep Emergent Marsh. Each bar represents the amount of "coverage" for all the species growing at that height. Because layers overlap (shrubs may grow under trees, for example), the shaded regions can add up to more than 100%.

Information for this guide was last updated on: July 29, 2021