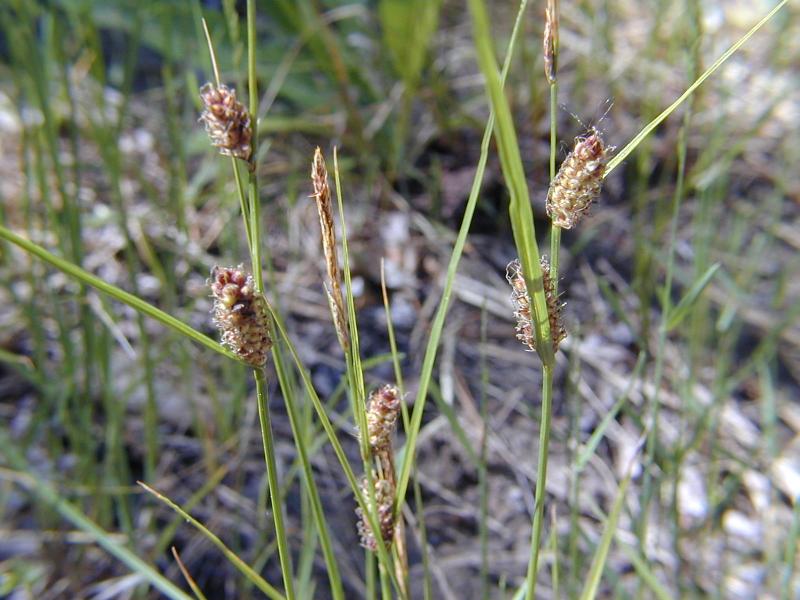 There are ten known populations and approximately twenty historical locations. This plant is found within the dunes of the Great Lakes, military training installations, old sand pits, gravel mines, and other areas of exposed sandy or rocky soils. It may be overlooked since it often occurs in disturbed areas (i.e. disturbance that exposes bare mineral soils). As is the case with many disturbance-loving species, this sedge is able to seed bank for long periods of time allowing it to appear for a short time after a disturbance (e.g. fire or soil scrape) and then disappearing again until the next disturbance. This makes survey work somewhat more challenging. Fortunately, this is a relatively easy sedge to identify. To ensure its long-term existance at any site, active management strategies that replicate natural disturbance may be needed.

Human disturbances such as trampling by hikers and ATV's are a potential threat. Since this species is a disturbance loving species these disturbances will probably not be a problem unless they become too extensive. Invasive species are a potential threat at two populations. Another potential threat is succession of habitat were C. houghtoniana occurs. This species thrives on recently disturbed soils and then after a few years dies back. The seed bank remains viable for a long time and when a new disturbance occurs, including fire, the seeds in the seed bank germinate and the process starts anew. Therefore, although succession of habitat seems like a threat, in the long term it may not be a problem for this species.

At two populations, invasive plants should be monitored and managed if they threaten the habitat where the C. houghtoniana occurs. Populations may decline as natural succession occurs. This should be allowed. Additionally, natural disturbance regimes such as fire, should be allowed to continue or they should be replicated as with a controlled burn.

Surveys are needed at all historical populations. New populations should be sought in appropriate habitat such as disturbed sandy areas and roadsides in northern New York.

Carex houghtoniana occurs on the Lake Ontario dunes and dune swales, sandy disturbed areas including roadsides and gravel pits, pine barrens, talus slopes, and successional forests. It prefers sandy and occasionally rocky soils that are disturbed and does best in open environments although, it can grow in some shade if the soils have been disturbed (New York Natural Heritage Program 2006). Dry to moist sandy or gravelly soils in open, disturbed sites, rocky balds, ledges (Reznicek and Catling 2002). Dry acid sands, gravels, and clearings (Fernald 1970). Sandy or rocky soil (Gleason and Cronquist 1991). Open sterile sandy and rocky soils (Mackenzie 1931-1935).

Carex houghtoniana is scattered throughout most of northern New York. There is also an old report of this species from northwestern New York.

Houghton's sedge is a small-tufted, grass-like perennial that occurs in patches. It has strap like leaves that are 2.8-8.5 mm wide. Stems are 20-100 cm tall and have leaves along the lower parts of the stems. Towards the apex of the stems are 2-7 narrowly cylindrical flower/fruit clusters (spikes). The upper spikes are composed of male flowers and the lower spikes are composed of female flowers. The fruits (perigynia) are veined, hairy, 4.5-6.5 mm long, and have a short beak with two straight teeth at their apices (Reznicek and Catling 2002).

Carex houghtoniana is long rhizomatous and colonial. It has bladeless basal sheaths which are reddish purple. Leaf blades are 2.8-8.5 mm wide and glabrous. There are (1-)2-3(-4) lateral ascending to erect pistillate spikes which are 1.0-4.5 cm long and 8-12 mm wide. There is one terminal staminate spike and sometimes up to two additional staminate spikes just below the terminal one. Perigynia are 16-22 veined, broadly ovoid to ellipsoid, sparsely short-pubescent, 4.5-6.5 mm long, and have a bidentate beak 1.2-2.0 mm long (Reznicek and Catling 2002).

Carex houghtoniana is easiest to identify when it has just immature to mature perigynia which are not easily shedding. Full plants with rhizomes are helpful in identification and should be collected.

Carex houghtoniana can be distinguished from most other sedges by its pubescent perigynia with a bidentate beak and densely arranged erect pistillate spikes (lower spikes ascending). Some close relatives in sections Carex and Paludosae can appear somewhat similar. Carex houghtoniana can be distinguished from these by its glabrous leaves, lack of true vegetative culms, strongly reddish basal sheaths, strongly bidentate beak, and veins of the perigynia evident and not obscured by pubescence.

Carex houghtoniana starts to produce immature fruits in June. These mature and persist till late July or sometimes into early August. During the later part of this season the fruits are starting to shed easily. Therefore, the best time to survey for this species is mid-June till mid-July.

The time of year you would expect to find Houghton's Sedge fruiting in New York. 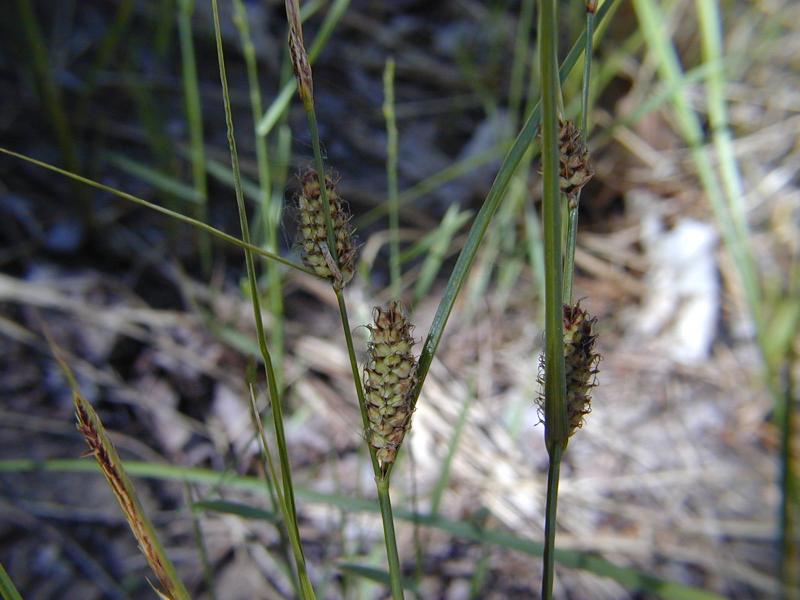 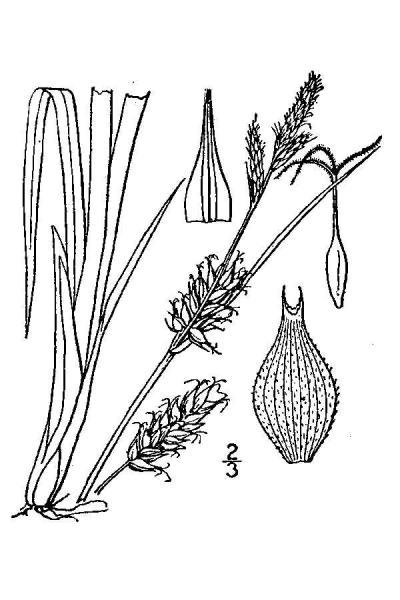 Chester Dewey originally published the name Carex houghtoniana. Soon after, John Torrey tried to change the name to C. houghtonii (Mackenzie 1931-1935) but the original spelling must be followed according to the rules of botanical nomenclature (Voss 1972). Carex houghtoniana is in section Paludosae. It was formerly placed in section Carex but the latter section has been split and currently excludes C. houghtoniana. Section Paludosae is still considered a broadly defined and perhaps not distinct section and needs further revision (Reznicek and Catling 2002).