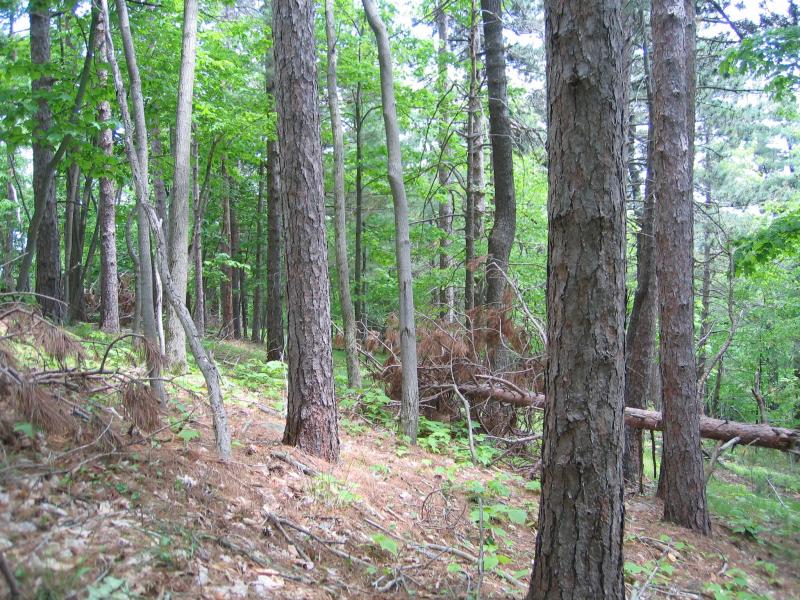 Eastern white pine is a long-lived tree commonly reaching 200 years if undisturbed; maximum age may exceed 450 years. It has a remarkable rate of growth compared to other pine and hardwood species within its range. White pine also has the distinction of being the tallest tree in eastern North America. In natural pre-colonial stands it is reported to have grown to as tall as 70 meters (230 ft) tall, at least on rare occasions; the current tallest individuals reach to between 50 and 55 meters (160-180 ft).

There are an estimated 500 to 4,000 occurrences statewide. A few documented occurrences have good viability and several are protected on public land or private conservation land. This community is widespread throughout upstate New York and includes several very large, high quality, old-growth examples. The current trend of this community is probably stable for occurences on public land and private conservation land, or declining slightly elsewhere due to moderate threats related to intensive logging and development pressure.

The number and acreage of pine-northern hardwood forests in New York have declined moderately in recent decades as a result of intensive logging, agriculture, and other development.

The number and acreage of pine-northern hardwood forests in New York have probably declined substantially from historical numbers likely correlated with past logging, agiculture, and other development.

Threats to forests in general include changes in land use (e.g., clearing for development), forest fragmentation (e.g., roads, excessive logging), recreational overuse (e.g., snowmobile trails, hiking trails), and invasive species (e.g., insects, diseases, and plants). Other threats may include over-browsing by deer, fire suppression, and air pollution (e.g., ozone and acidic deposition). Examples of this community that occur at higher elevations (e.g., >3,000 feet) may be more vulnerable to the adverse effects of atmospheric deposition and climate change, especially acid rain and temperature increase.When occurring as expansive forests, the largest threat to the integrity of pine-northern hardwood forests are activities that fragment the forest into smaller pieces. These activities, such as road building and other development, restrict the movement of species and seeds throughout the entire forest, an effect that often results in loss of those species that require larger blocks of habitat (e.g., black bear, bobcat, certain birds). Additionally, fragmented forests provide decreased benefits to neighboring societies of services these societies often substantially depend on (e.g., clean water, mitigation of floods and droughts, pollination in agricultural fields, and pest control) (Daily et al. 1997). White pine blister rust may be considered a threat to occurrences of pine-northern hardwood forest that experience extreme outbreaks, especially if it coincides with other stresses and reduces white pine regeneration. White pine blister rust (Cronartium ribicola) is highly virulent throughout the range of white pine. Trees are susceptible from the seedling stage through maturity. Blister rust can cause high losses both in regeneration and in immature timber stands (Wilson et al. 1965). Southern pine beetle (Dendroctonus frontalis) is a bark beetle that infests pine trees, such as pitch pine, white pine, and red pine. Southern pine beetle is native to the southeastern United States, but its range has spread up the east coast to Long Island, New York in 2014. Natural communities dominated or co-dominated by pines would likely be most impacted by southern pine beetle invasion.

Management should focus on activities that help maintain regeneration of the species associated with this community. Deer have been shown to have negative effects on forest understories (Miller et al. 1992, Augustine & French 1998, Knight 2003) and management efforts should strive to ensure that regenerating trees and shrubs are not so heavily browsed that they cannot replace overstory trees when required to do so. Avoid cutting old growth examples and encourage selective logging areas that are under active forestry.

This community is widespread throughout upstate New York, north of the North Atlantic Coast Ecoregion. It is more common to the north, especially in the Northern Appalachians Ecoregion where it is represented by small to large patch occurrences. Examples dominated by red pine with abundant red oak are concentrated on lake outwash plains in northeastern Essex and southeastern Clinton Counties where it approaches matrix forest size.

This community is limited to the northern fringe of the Eastern United States and southern Canada. This range is estimated to span north to southern Ontario and Quebec, west to Minnesota, south to northern Michigan and northern New York, and east to Nova Scotia and Newfoundland

Pine-northern hardwood forest occurs on gravelly outwash plains, delta sands, eskers, and dry lake sands in the Adirondacks. Generally, the combined cover of indicator species such as white pine (Pinus strobus) and red pine ( P. resinosa) in the woody layers must be at least 20% and ideally at least 50%, otherwise the occurrence may grade into other forest types such as hemlock-northern hardwood forest or beech-maple mesic forest. Physiognomy ranges from a semi-broadleaf deciduous (75% cover of hardwoods, 25% cover of conifers) to needleleaf evergreen forest.

Known examples of this community have been found at elevations between 360 feet and 2,225 feet. 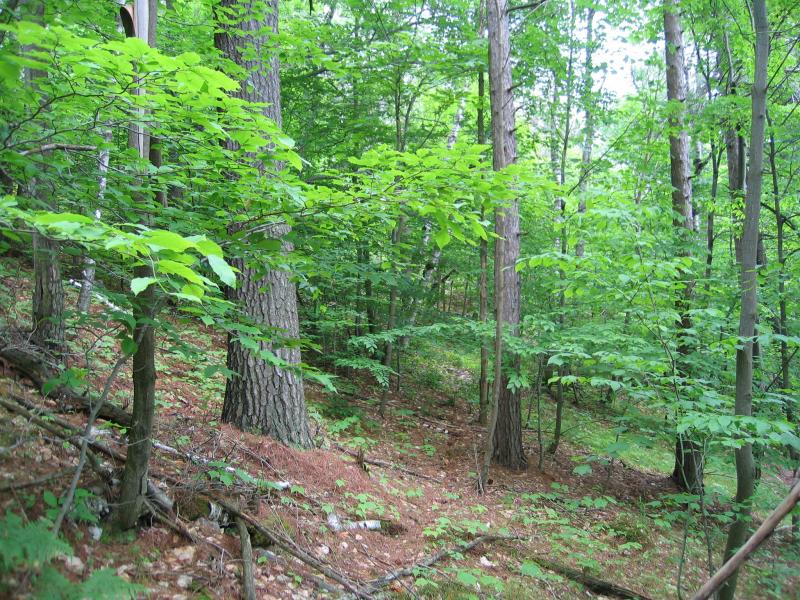 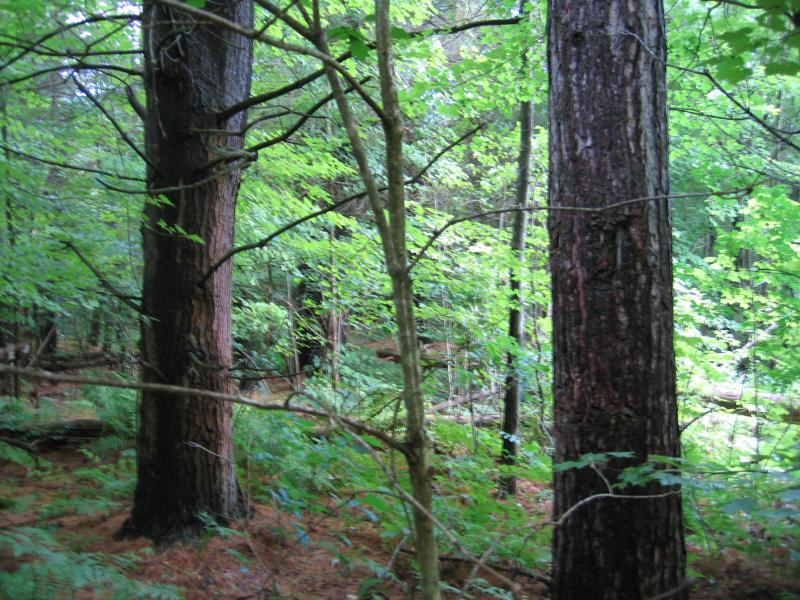 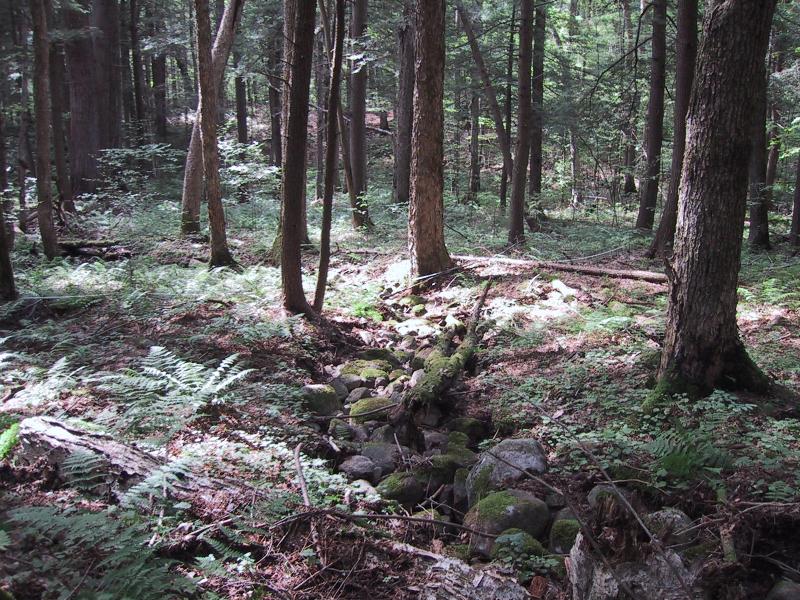 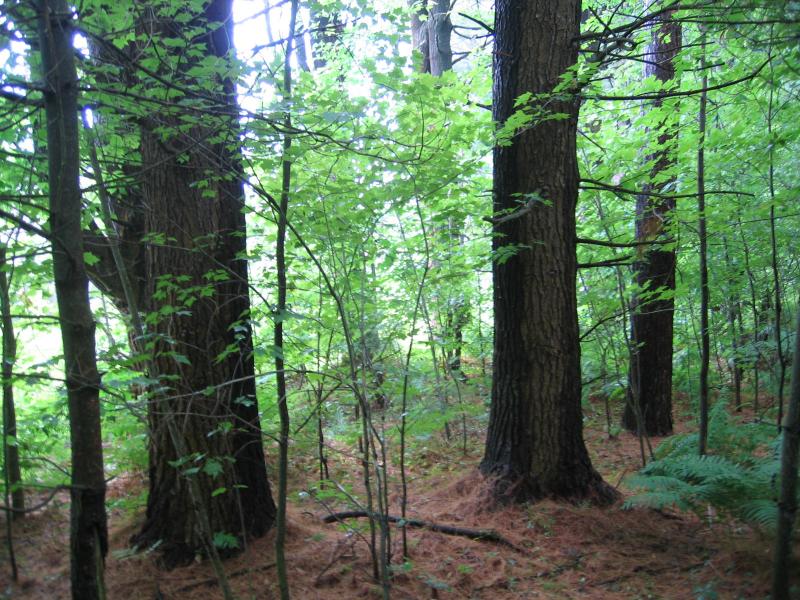 This figure helps visualize the structure and "look" or "feel" of a typical Pine-Northern Hardwood Forest. Each bar represents the amount of "coverage" for all the species growing at that height. Because layers overlap (shrubs may grow under trees, for example), the shaded regions can add up to more than 100%.

Information for this guide was last updated on: May 18, 2020