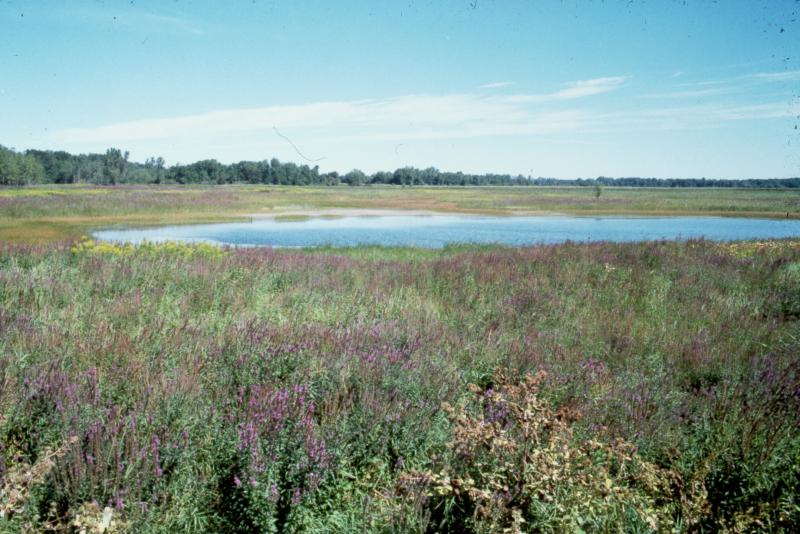 The nickname "The Salt City" was given to Syracuse during the boom time, during the 1700 and 1800s, of the commerical salt industry in the area. During this period, brine from springs including very likely some of the remnant inland salt ponds was one of the local resources used in large scale salt production (Kappel 2000).

This small patch community has been degraded or destroyed throughout its range. The largest examples were likely lost to activities related to salt mining and other industrial development. New York State is at the edge of the range of the community. There are only two currently documented occurrences in New York, and probably not many more historically given that its range is primarily restricted to areas associated with inland salt springs in central New York. There is only one documented occurrence with very good viability in the state (i.e., one AB-ranked occurrence) and it is protected on private conservation land. The current trend of this community is declining moderately as a result of invasive species, agricultural and urban development, and alteration to the natural hydrology.

The number and acreage of inland salt ponds in New York have declined in recent decades as result of habitat destruction (e.g., filling of wetlands) and the spread of invasive species, such as common reed (Phragmites australis).

The number and acreage of inland salt ponds in New York have probably had a large decline from historical numbers likely correlated to the salt mining industry and other development.

Where practical, establish and maintain a natural buffer to reduce storm-water, pollution, and nutrient run-off, while simultaneously capturing sediments before they reach the pond. Buffer width should take into account the erodibility of the surrounding soils, slope steepness, and current land use. Wetlands protected under Article 24 are known as New York State "regulated" wetlands. The regulated area includes the wetlands themselves, as well as a protective buffer or "adjacent area" extending 100 feet landward of the wetland boundary (NYS DEC 1995). If possible, minimize the number and size of impervious surfaces in the surrounding landscape. Avoid habitat alteration within the pond and surrounding landscape. For example, roads and trails should be routed around ponds, and ideally not pass through the buffer area. If the pond must be crossed, then bridges and boardwalks are preferred over filling. Restore past impacts, such as removing obsolete impoundments and ditches in order to restore the natural hydrology. Prevent the spread of invasive exotic species into the pond through appropriate direct management, and by minimizing potential dispersal corridors, such as roads.

Search for historical sites, possibly needs some de novo work. Survey the aquatic community and determine which fish and invertebrates are present.

There is a need for research focusing on identifying and compiling information on previously known and suspected locations of inland salt ponds. Research is also needed to understand both the historical range of variation in water level fluctuations from year to year and how the composition and abundance of characteristic species (including fauna) in the ponds.

This inland salt pond community type is found in scattered locations in the upper midwestern United States in the Great Lakes region, including Illinois, Michigan, and central New York.

This is an aquatic community of a small, spring-fed pond in which the water is salty from flowing through salt beds in the aquifer. These salt springs occur in central New York, and were once common around Onondaga Lake in Syracuse and near Montezuma. Most of the springs have been exploited for the production of salt, and are very disturbed or completely destroyed. The ponds are permanently flooded, but the water levels fluctuate seasonally. The bottom and shores of an inland salt pond are very mucky.

Most examples of this community in New York are severly distubed. Intact occurrences are dominated by ditch grass (Ruppia maritima) and the floating aquatic Sago pondweed (Stuckenia pectinatus).

Known examples of this community have been found at elevations between 370 feet and 380 feet. 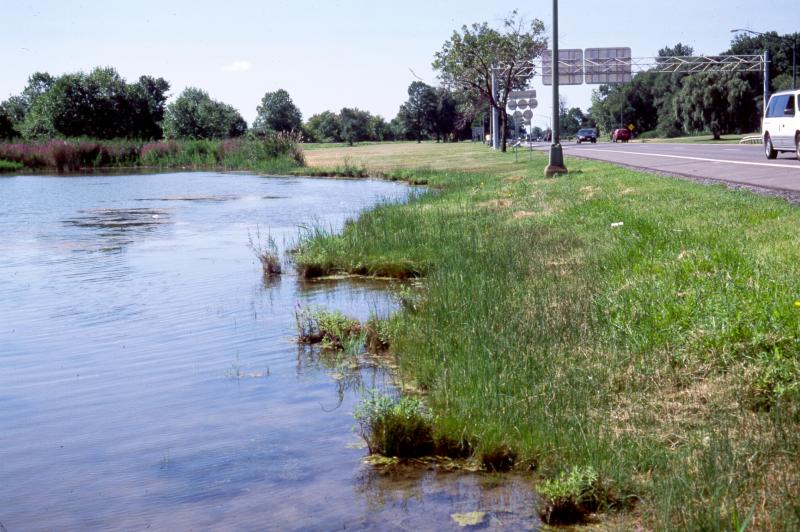 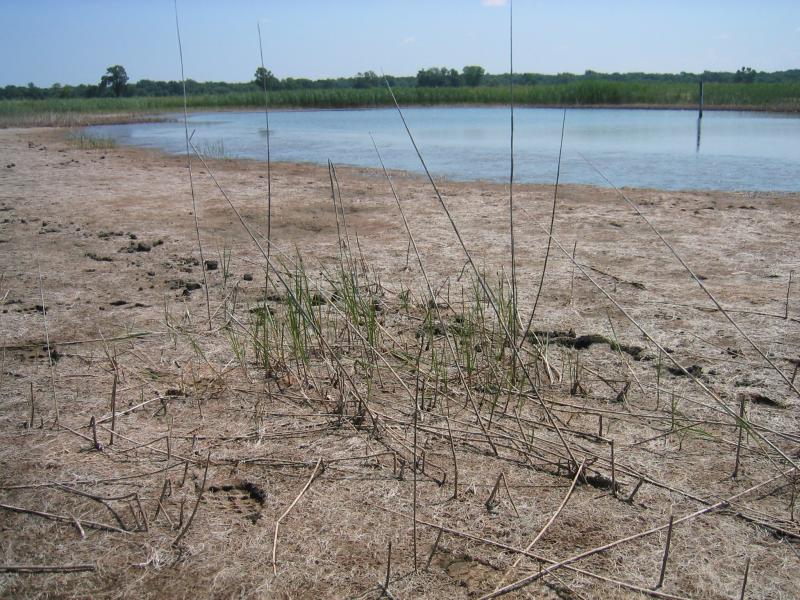 This figure helps visualize the structure and "look" or "feel" of a typical Inland Salt Pond. Each bar represents the amount of "coverage" for all the species growing at that height. Because layers overlap (shrubs may grow under trees, for example), the shaded regions can add up to more than 100%.

Marcus, Bernard A., H.S. Forest and B. Shero. 1984. Establishment of freshwater biota in an inland stream following reduction of salt input. Canadian Field-Naturalist 98(2):198-208.