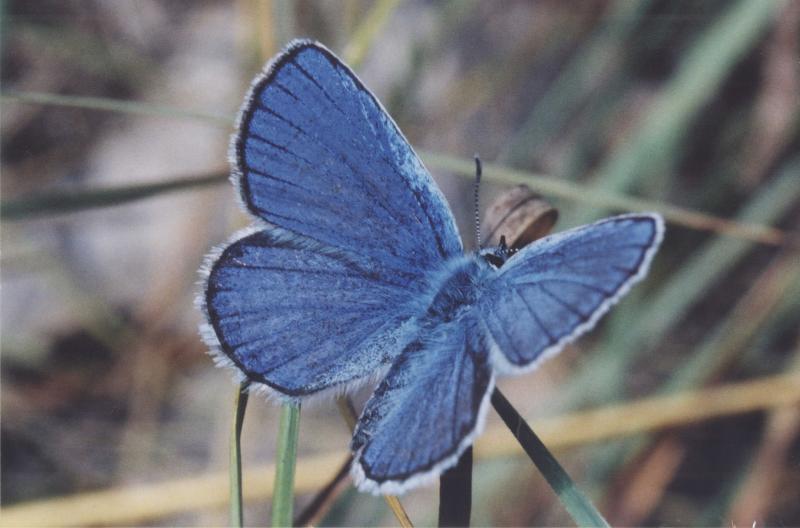 Karner blue larvae and ants have a unique relationship. The larvae produce secretions that ants find tasty. In return, the ants protect the larvae from predators.

There are four recovery units and New York. Parts of Albany and Saratoga counties have undergone habitat restoration and the populations are showing signs of recovery. Sites that are not actively managed typically have fewer than 100 butterflies present. This species does not persist well if the total July brood for the metapopulation is fewer than 1,000 adults. This Federally and State-listed species is completely management dependent in New York, and is the case in most or all of the remaining portion of the range.

There has been restoration efforts in the Albany Pine Bush Preserve and the Saratoga Sandplains. In Albany, there has been a population increase trend since 2007. First brood estimates went from 700 individuals in 2007 to 8400 individuals in 2014. Second brood estimates were 850 individuals in 2007 and increased to 14,200 individuals in 2014 (Albany Pine Bush). The increase is the result of extensive restoration efforts that includes the removal of non-native vegetation, controlled burns, planting native vegetation, and reintroduction efforts. In 1997, the Albany Pine Bush Commission estimated approximately 5 ha of suitable habitat. As of 2014, there are approximately 168 ha of suitable habitat (Albany Pine Bush). Similar efforts have been made in the Saratoga Sandplains. Population estimates in western Saratoga County, including Saratoga Airport, often have at least 500 to 1000 butterflies. While the suitable habitat has expanded on managed parcels of land, there are some small, remnant populations that continue to decrease in size due to succession and loss of wild lupine. Some of these populations are now extirpated. Glens Falls has remnant populations. At some sites, the current population sizes are not known.

The threats include habitat loss, degradation, and fragmentation, invasive species, fire suppression, inappropriate management of wild lupine, mosquito spraying and the use of other insecticides, and browsing of lupine by herbivores, primarily deer. There is also a concern that a reduction in winter snow pack and other changes, due to climate change, threaten this species. Such threats could be of particular concern in New York, which has a warmer climate and is farther south than most of the current range for this butterfly.

Karner Blue habitat management requires some labor-intensive strategies because natural disturbances (e.g., fire) are often suppressed. Management techniques that mimic natural disturbances include mowing, herbicide use, and prescribed fire. These practices will help maintain open habitat for wild lupine to persist as well as other nectar species by controlling succession and invasive species. Management plans should be site specific and planned with appropriate government agencies. When mowing is used, it's important to clean mowers and all equipment before and after use to prevent the spread of invasive species to other sites. Site disturbances should be timed to minimize directly harming Karner Blue. Mowing should be timed after wild lupine have senesced, mowers should be set at 6 to 8 inches above ground, and preferably after the first frost (Gifford and O'Brien 2010). No more than half of a Karner Blue subpopulation should be mowed (Gifford and O'Brien 2010). All Karner Blue life stage are vulnerable to fire. Prescribed fire should contain no more than a third of a site in a given year and adjacent thirds should not be burned in consecutive years (Gifford and O'Brien 2010). Refugia is important for Karner Blue and other animals. If there is a lack of lupine and nectar species at a site, Lerg and Carnes (2007) suggests planting wild lupine along with at least three first brood nectar species and three second brood nectar species. Herbivores, especially deer, have reduced wild lupine and important nectar sources. Insecticide use should be minimized as much as possible. When absolutely needed, attempt to find insecticides that target the desired insect. Treatment should be avoided when Karner Blue are active. There has been increasing concerns about climate change and potential loss of species. Lerg and Carnes (2007) recommend maintaining a large, diverse landscape with topographic heterogeneity when possible. You should also consider searching for potential habitat to the north. This may be more challenging as the ecosystems used by Karner Blue are not widespread. Another concern is extreme weather events (e.g., tornado, torrential rains, unseasonably cold or hot weather). Large, buffered metapopulations may help reduce loss from these weather events. Restoration of sites may be needed depending on the severity of damage. Another issue on a landscape scale to consider is the presence of other rare Lepidoptera, such as Frosted Elfin (Callophrys irus) that also use wild lupine as a larval food plant.

Some research has shown that early spring mowing benefits the survival of the first brood larvae (Gifford and O'Brien 2010). Additional studies are recommended to determine if this is a beneficial management strategy. The severity of mosquito spraying to larvae and adults needs to be evaluated if it occurs in the vicinity Karner Blues, since aerial spraying for mosquitoes is more prevalent in New York than most other northern states and may involve large areas.

Currently, the only known occupied sites are clustered in Albany, Schenectady, Saratoga, and Warren Counties and represent remnants of two or three once large metapopulations. Historically there were also specimens, or at least reports from Watertown, Tonawanda, Rome, Sullivan County, and Brooklyn (Shapiro 1974).

The Karner Blue is currently found in Minnesota, Wisconsin, Michigan, northern Indiana, and New York. It has been extirpated from Illinois, Iowa, Ohio, Ontario, Pennsylvania, Massachusetts, New Hampshire, and Maine, but was reintroduced in New Hampshire and Ohio. It was falsely reported from North Carolina and Manitoba.

Karner blue has a wing span of approximately 1 inch, about the size of a nickel. Male dorsal wings are deep violet-blue with black margins that have a white border while females are a dusky brownish-blue with orange spots on the edges of the hind wings. Ventrally, males and females are similar, wings are gray with scattered black spots with white borders and bands of orange crescents on the edges of the fore and hind wings. Karner blue are the only small butterfly with this orange crescent banding . Larvae are pea green and covered with fine hairs.

The adult is the best life stage for identification. The eggs and larvae can be identified by an expert.

It is unlikely to be seen more than a few yards from patches of wild lupine, although wandering individuals do occur up to a mile or more away from main breeding areas.

Larvae feed only on the native wild lupine in nature. The adults take nectar from many kinds of low growing flowers, native or otherwise.

The exact phenology varies from year to year and colony to colony. Those in the most open habitats tend to be about a week ahead of those in more wooded places. There are always two annual generations. The eggs overwinter and hatch, but not all at once, around the middle of April. The larvae mature mostly in late May and pupate. Adults emerge in late May to early June and are active for two to three weeks. The eggs from these adults hatch in a few days and the larvae are mostly mature in early July. Second brood adults fly for about three weeks and peak numbers usually occur for about a week in the second half of July. The eggs laid by these adults hatch the following spring.

The time of year you would expect to find Karner Blue reproducing, larvae present and active, eggs present outside adult, and pupae or prepupae present in New York. 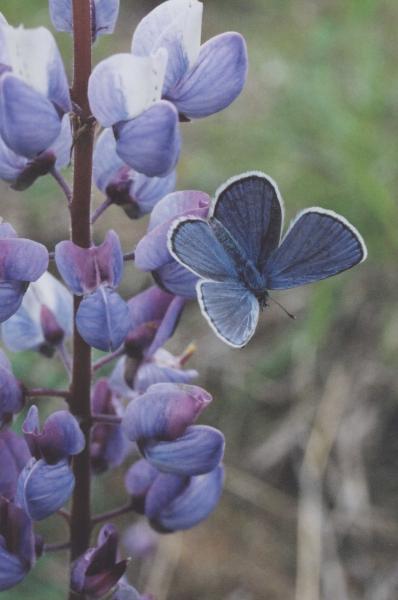 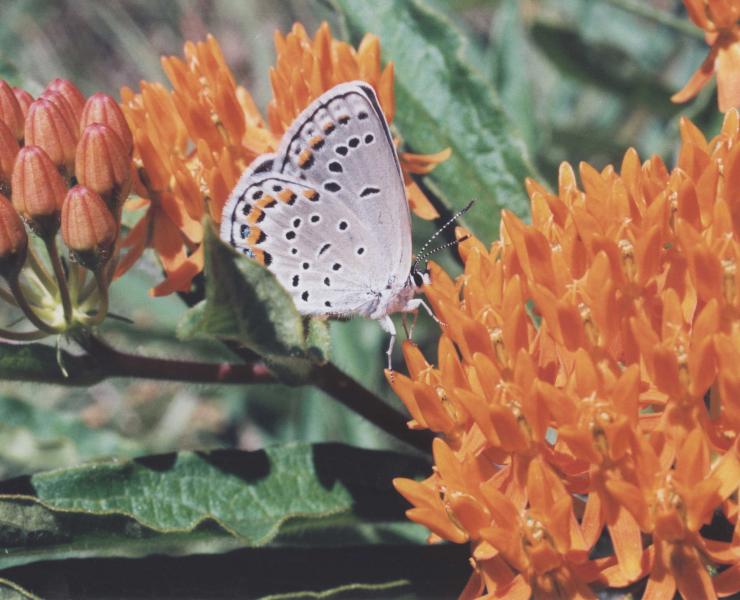 Some experts suspect this will prove to be a full species and the number of species in this genus is not well understood. In New York, the Karner Blue is considered a subspecies of the Melissa Blue (Plebejus melissa) because no published works have revised the taxonomy to elevate this subspecies to species status.