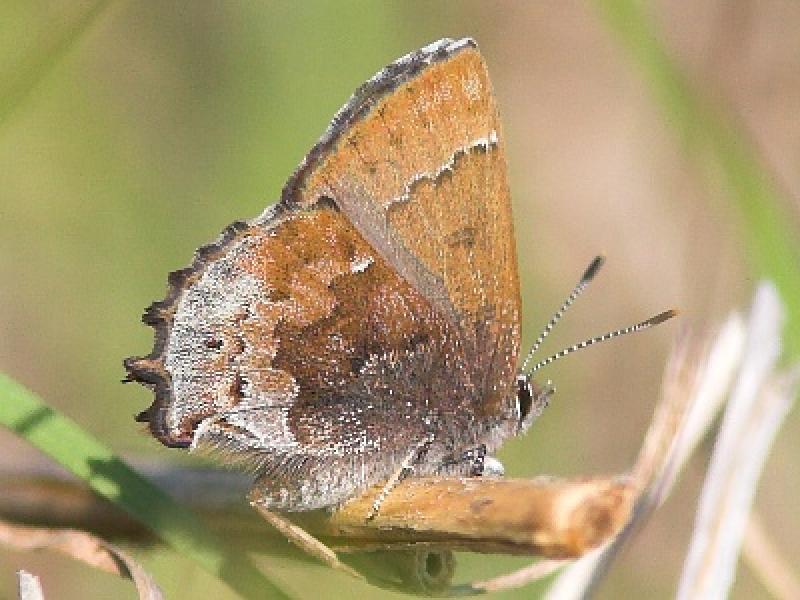 Frosted Elfin has two host plant races in New York: lupine-feeding and indigo-feeding. There are no known populations that feed on both host plants when both plants are present and the two races are not know to co-occur (NatureServe 2020).

The Frosted Elfin has become globally rare and is extirpated in Canada. In the United States, there are no states where it is secure and it has become extirpated in some states. Much of the habitat has been lost in New York and small isolated colonies are unlikely to persist. Threats exist in many places and include high deer numbers and inappropriate habitat management. There are a few well-known, protected, and adequately managed populations of the lupine feeding race. However, there may be fewer than five viable metapopulations in New York. This rare species has become highly management dependent.

It is difficult to determine the short term trends for this species because there are many sites that have not been surveyed in more than 10 years. It is assumed that populations with little or no habitat management are in decline. The recent Karner Blue habitat restoration efforts in Albany and Saratoga counties likley benefits Frosted Elfin populations.

In New York State, Frosted Elfins occur in areas that have been under significant development pressure, such as Long Island, Albany, and Saratoga Springs for decades. The suitable habitat has been greatly diminished by development and succession.

Threats include habitat loss, degradation, and fragmentation, invasive species, severe weather (drought, late frost, or late snow), fire suppression, inappropriate habitat management, mosquito spraying and the use of other insecticides, and browsing of foodplants (and eggs and larvae) by herbivores, primarily by deer (USFWS 2018, NatureServe 2020). Habitat fragmentation may be the greatest threat in locations where potentially viable metapopulations still occur. Small isolated colonies are more likely to become extirpated because these populations sometimes fail to produce any adults in some years, due to deer browse or other variables, and subsequently are not recolonized. However, when populations are clustered, females can move between each of them and extirpations are often temporary. Habitat disturbance, such as ORV use, erodes soil, can damage or kill host and nectar plants, and kill eggs, larvae, and pupae. Inappropriate habitat managment can include poorly time prescribed burns, frequent mowing, and herbicide application that kills host and nectar plants (USFWS 2018). Spongy moth (Lymantria dispar) spraying is also a threat to Frosted Elfin larvae (USFWS 2019). However, a healthy Frosted Elfin population is likely to survive a single application of Bacillus thuringiensis kurstaki (Btk), a bacterial biological control used on spongy moth caterpillars (NatureServe 2020).

All Frosted Elfin habitats require disturbance, such as fire or mowing, to impede succession. Where fire is used, unburned habitat patches, or refugia, are needed. Indigo (Baptisia spp.) feeders will usually have very high mortality in these areas as they do not pupate in the soil (NatureServe 2020). Lupine (Lupinus perennis) feeders, which pupate in the sand, may not have the same high mortality rates, but they may leave the burned areas. Prescribed burns should be timed to avoid time periods when egg and larvae are present. Winter mowing is a proven management option, but the footprint of the machinery should be minimized in order to avoid crushing the pupae. Spring mowing (e.g., along highways) where host plants are present will likely kill larvae and greatly reduce available foodplants (NatureServe 2020) and should be avoided whenever possible. Populations can be maintained for decades with properly timed mowing. In Wisconsin, Frosted Elfins have been consistently found at sites with at least a partial mowing regimen of no more than once a year (Swengel and Swengel 2007 cited in USFWS 2018). Generally, management that works for the Karner Blue (Plebejus melissa samuelis) should work for the co-occurring Frosted Elfin, although the elfins might be more vulnerable to deer browse since the larvae feed on the lupine flowers (NatureServe 2020). Shelter from wind and the proximity of trees may be important for indigo feeders, although the adjacent habitat may be brushy with few trees. Maintaining connectivity of colonies where they are clustered is important and is likely to be critical for long term persistence of populations.

Frosted Elfin populations are known to fluctuate annually. Females are good colonizers. A healthy population has a peak count of at least 30 individuals, multiple patches of host plants within 2 kilometers of each other that are each 5.93 acres (2.4 hectares), relatively abundant nectar species, a semi-open canopy with 6-50% cover, minimal threats, and management plans to maintain habitat (USFWS 2018).

Research into the effects of prescribed burning on populations, especially wild lupine (Lupinus perennis) feeders is needed. Lupine feeders, which pupate in the sand, probably do not incur much mortality, but they apparently avoid recently burned areas (NatureServe 2020). Research is also needed to determine how long the post-fire effects persist and if they can be mitigated. Additional information on the situations that encourage females to move between foodplant patches is also needed.

The key habitat feature is an abundance of the foodplant or, perhaps, many moderate-sized patches of the foodplant within a few hundred acres or more. This species is often associated with remnant pine barrens, oak savannas, or dry oak forest. There are two races of Frosted Elfin, one that feeds mostly on the flowers or seed pods of wild lupine (Lupinus perennis), and another that feeds on leaves and stems of wild indigo (Baptisia spp.), primarily the native Baptisia tinctoria in New York. Populations will feed on only one of these plants or the other, even when both types of plants are present. Lupine feeders occur in the Albany area, western New York, and on Long Island, while wild indigo feeders occur in the lower Hudson Valley and on Long Island. Frosted Elfin are not likely to be found in stands of foodplants that have been isolated for a long period of time. This species nearly always occurs in clusters of populations that function as metapopulations and small habitat patches may be unoccupied in some years. Females disperse within the habitat and larvae can turn up in appropriate habitat where adults are not usually seen. Typical habitat features include a shrubby or partially open aspect and a high density of the foodplant, although the observations of Albanese et al. (2006) may not apply fully to the lupine feeders which seem more capable of using open grassland with no tall shrubs or trees. Nectar availability might also be an important habitat feature.

This species occurs in sandy areas in eastern North American from New Hampshire to northern Florida, west along the Gulf states to eastern Texas, eastern Oklahoma, and Arkansas, and in the Great Lakes states in the US. The species formerly occurred in southern Ontario, Canada. Maine was once considered part of the Frosted Elfin range; however it is now believed this species was confused with Henry’s Elfin (Callophrys henrici) (Calhoun 2017 cited in USFWS 2018).

The distribution is greatly reduced to the extent that occurrences in many states are isolated. Lupine-feeding populations of the Frosted Elfin are found mostly in the Carolina Sand Hills to northern Florida, and in the Great Lakes region from Wisconsin to northern Ohio, but extend eastward in widely scattered sandy areas through New York, central Pennsylvania, and inland New England, including southern New Hampshire, western Massachusetts, western Rhode Island, and Connecticut, and on Long Island, New York and formerly into northern New Jersey. Lupine feeders also occur in the Delmarva Peninsula (Delaware and Maryland). Populations that feed on Baptisia occur from eastern Massachusetts south through New Jersey and eastern Pennsylvania and Virginia to northeastern North Carolina. There have also been a few occurrences of Baptisia feeders documented in West Virginia, extreme southern Ohio, and Kentucky, and very locally farther west in northern Arkansas and perhaps Kansas. Lupine and wild indigo feeding populations occurred about 15 kilometers apart in the 1970s in New Haven County, Connecticut (DFS, C.L. Remington), both may still occur in Suffolk County on Long Island, New York (Schweitzer 1992) as they formerly did in northern New Jersey, and both occur at a single site in Maryland (Frye and Tangren 2013). Subspecies arsace (at least as the name has been applied) is apparently a disjunct extreme variant of the wild indigo feeder (according to the late Ronald Gatrelle) found only in the coastal Carolinas, which would be east of the lupine feeding populations. If all populations not presently treated as hadros or arsace are treated as a single subspecies, C. irus irus occurs to the north, west and well to the south of C. i. arsace and to the north and east of C. i. hadros.

Frosted Elfin is a gray/brown butterfly that has a wingspan that ranges from approximately 1 inch to 1.25 inches. Males and females are similar. The upperside is a dark gray/brown. The hindwing has a black spot above a single short tail. The underside of the wing is gray/brown, but somewhat variegated. The outer margin of the hindwing has scales that are whitish giving them a frosted appearance. There is an irregular postmedian line that divides the darker scales from the “frosted” scales. Larvae are a pale greenish white, except in Oklahoma where they are yellow. They are covered in short, white hairs. Pale lateral lines are along the sides.

In the field, association with the foodplant is the first clue to the identity of this species. The combination of extensive gray/brown beneath, tailed hindwing, and the relatively large size for an elfin are generally diagnostic for adults.

The best life stage for identification is the adult stage, although the larvae are identifiable by experts.

This species is almost always found within 50 feet of one of the foodplants.

The larval foodplant is Wild Indigo (Baptisia spp.) in some southeastern New York colonies and Wild Lupine (Lupinus perennis) elsewhere in the state. Both plants are used on Long Island, but no colony has been found to use both plants anywhere in the range of the species.

There is one annual generation with adults starting about late-April to mid-May and often persisting into June. Wild indigo feeders probably occur a bit later than wild lupine feeders in similar climates. At least with the wild indigo feeder, adult emergence is staggered and some fresh individuals can be seen for approximately one month. The egg stage is brief and the larval stage lasts for about a month, depending on the weather. Most larvae pupate by the end of June and most of the year is spent in that stage.

The time of year you would expect to find Frosted Elfin reproducing, larvae present and active, eggs present outside adult, and pupae or prepupae present in New York. 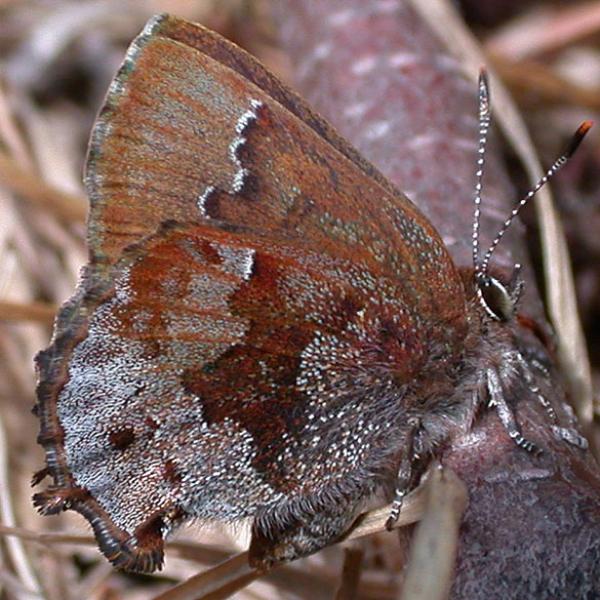 This guide was authored by: Schweitzer, Dale F. and Hollie Y. Shaw

Information for this guide was last updated on: July 16, 2020