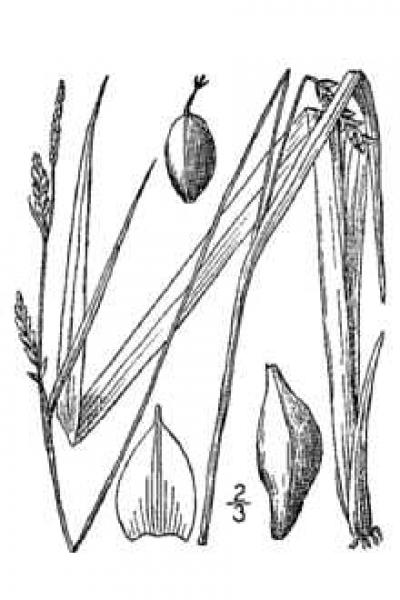 The specific epithet, striatula, means "with fine longitudinal lines" (Fernald 1970). This refers to the many fine lines (nerves) on the perigynia.

There are currently no known extant populations in New York. As a plant at the northern edge of its range, this sedge has likely always been rare in New York. Surveys in the lower Hudson Valley and the coastal islands should target this plant to determine if more populations are present.

Populations of this species have not been observed in over 20 years, but surveys have been limited. Therefore, short-term trends are unknown.

This sedge is at the northern edge of its range on the coastal plain. This area of New York is under extreme pressure from urbanization. One of the known historical populations from Kings County is believed extirpated. Overall, long term trends show this species declining to the point that it cannot be found any longer in New York.

There are no specific threats known for Carex striatula in New York.

In New York this sedge is only known historically from Long Island and Staten Island.

Carex striatula is an Eastern Gulf Coastal Plain and Gulf Coastal Plain species that does not commonly occur within glaciated territory or west of the Mississippi River. It ranges from the eastern third of Texas (Jones 1994), northeast through Tennessee, Kentucky and Long Island, New York and south to Florida and the Gulf states (Bryson 1980). It occurs much less commonly inland in the Piedmonts and Appalachian Mountains. There are no records for occurrences south of the United States/Mexico border, and Gaddy (1994) is very doubtful that is would occur any further south.

The range for C. striatula is very similar to the botanically comparable C. styloflexa, however C. striatula ranges further inland on the continent (Bryson 1994).

Carex striatula is a common and occasionally invasive perennial sedge of dry to slightly mesic deciduous woodlands. It grows as tufts up to 5-6 inches in diameter, but typically not over 3 inches. There are generally 4-10 stems per plant, although there may be up to 20-30 (Bryson 1994). The stems grow obliquely upward and are sharply triangular. The sheath that surrounds the stem at the base is white or light brown. The inflorescence contains a terminal pollen producing (staminate) spike and 2 or usually 3 pistillate spikes below the staminate spike. The small, dry indehiscent (not splitting open at maturity) fruit is a 3-angled achene. (Gleason and Cronquist 1991).

Carex striatula is very similar to C. laxiflora and has bases of leaf sheaths tan or light brown (use magnification and light to assess). The proximal spikes are pistillate and have a peduncle 0-5 cm long while the terminal spike is staminate and has a peduncle 0.4-12 cm long. Lateral spikes are 22-62 mm long and 3-5 mm wide and the terminal spike is 22-32(-36) mm long and 2-3 mm wide. There are 6-18 loosely overlapping to more remote perigynia per pistillate spike. Perigynia are ascending, finely many nerved, and (3.4-)3.9-5.1 mm long with a straight to slightly curved beak 0.6-1.7 mm long (Bryson and Naczi 2002).

This species is close in appearance to some other members of section Laxiflorae and is best identified while it has slightly immature to mature fruit.

Carex striatula is a member of the section Laxiflorae which has a few other species in New York (C. albursina, C. blanda, C. gracilescens, C. laxiflora, C. leptonervia, C. ormostachya, and C. styloflexa). Many of these species are at least superficially similar.

The species has immature to mature fruit from late May through June. This is the best time to survey for the species.

The time of year you would expect to find Lined Sedge fruiting in New York.

Some botanists question the distinctness of this species compared to C. laxiflora (Braun 1967, Gleason and Cronquist 1991, Weakley 2004).

Weakley, A.S. 2004. Flora of the Carolinas, Virginia, and Georgia. Working draft of March 17, 2004. University of North Carolina, Chapel Hill, NC. 871pp. Currently published by the author and available on the web at (http://www.herbarium.unc.edu/flora.htm).

Information for this guide was last updated on: May 17, 2019