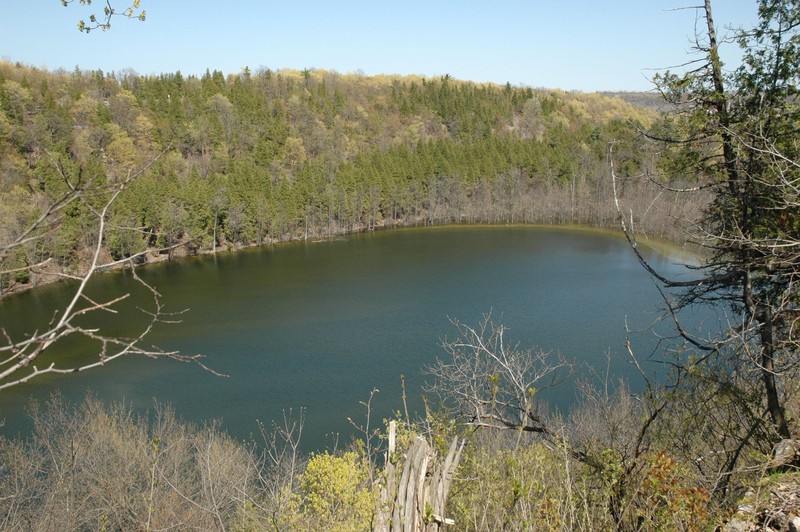 The best-known example of meromictic lake in New York is Green Lake in the town of Fayetteville. Green Lake got its name from its unusual green color from high levels of calcium carbonate, and not phytoplankton or algae that often give lakes a green appearance when their populations are high. Calcium carbonate reflects the green wavelength, thus giving Green Lake its distinctive green color (NYS DEC).

There are probably less than 20 occurrences statewide, and the total acreage is relatively small compared to other more common lake types. About three documented occurrences have good viability and are protected on public land. This community is limited to areas of the state where glacial waterfalls scoured deep plungepools into the bedrock creating steep-sloped margins that prevent winds from mixing the water. The current trend of this community is probably stable for occurrences on protected land, or declining slightly elsewhere due to development in the surrounding landscape and recreational overuse.

The number and acres of meromictic lakes in New York have probably remained stable in recent decades as a result of local lake protection efforts and state wetland protection regulations.

The number and acres of meromictic lakes in New York are probably comparable to historical numbers.

Where practical, establish and maintain a lakeshore buffer to reduce storm-water, pollution, and nutrient run-off, while simultaneously capturing sediments before they reach the lake. Buffer width should take into account the erodibility of the surrounding soils, slope steepness, and current land use. If possible, minimize the number and size of impervious surfaces in the surrounding landscape. Avoid habitat alteration within the lake and surrounding landscape. For example, roads should not be routed through the lakeshore buffer area. If a lake must be crossed, then bridges and boardwalks are preferred over filling and culverts. Restore lakes that have been affected by unnatural disturbance (e.g., remove obsolete impoundments and ditches in order to restore the natural hydrology). Prevent the spread of invasive exotic species into the lake through appropriate direct management, and by minimizing potential dispersal corridors.

The greatest threat would be altering hydrology or mixing status, but these lakes have so few species and such harsh conditions that they are unlikely to be altered or used very much. Run-off from development and/or clearing in the immediate lake watershed may be a threat. High visitor use of lake perimeter trails is a lesser threat.

Consider how water flows around and into this lake community. Projects that occur near this community must consider the proximity of the development to this lake and the potential for changing how water flows, both above ground and below ground, into this waterbody. Impervious surfaces that rapidly divert water to the pond should be avoided. For lakes with perimeter trails consider reducing trail width, evaluating current uses, and stabilizing heavy impact areas along the trail with native materials to prevent runoff and erosion into the lake. Prevent the spread of non-native species into or around the lakes. Identify the potential impacts of beach use, if present along the the lakeshore.

When considering road construction and other development activities, minimize actions that will change what water carries and how water travels to this lake community, both on the surface and underground. Water traveling over-the-ground as run-off usually carries an abundance of silt, clay, and other particulates during (and often after) a construction project. While still suspended in the water, these particulates make it difficult for aquatic animals to find food; after settling to the bottom of the lake, these particulates bury small plants and animals and alter the natural functions of the community in many other ways. Thus, road construction and development activities near this lake type should strive to minimize particulate-laden run-off into this community. Water traveling on the ground or seeping through the ground also carries dissolved minerals and chemicals. Road salt, for example, is becoming an increasing problem both to natural communities and as a contaminant in household wells. Fertilizers, detergents, and other chemicals that increase the nutrient levels in lakes cause algae blooms and eventually an oxygen-depleted environment where few animals can live. Herbicides and pesticides often travel far from where they are applied and have lasting effects on the quality of the natural community. So, road construction and other development activities should strive to consider: 1. how water moves through the ground, 2. the types of dissolved substances these development activities may release, and 3. how to minimize the potential for these dissolved substances to reach this natural community.

Portions of large lakes and bays, such as Cayuga Lake, Seneca Lake, and Irondequoit Bay, are reported to be meromictic (Anderson et al. 1985, Bubeck et al. 1995). Research is needed to determine if these areas should be classified as meromictic lakes, or treated as an embedded feature of a large lake type (e.g., summer-stratified monomictic lake). The distinction between meromictic lake and bog lake needs to be more critically evaluated, because occasionally bog lakes can also become meromictic or chemically stratified.

This broadly-defined community may be worldwide. Examples with the greatest biotic affinities to New York occurrences are suspected to span north to southern Canada, east to New Hampshire and Maine, west to Minnesota, southwest to Indiana and Kentucky, and southeast to Pennsylvania (Anderson et al. 1985).

Meromictic lakes are relatively deep with small surface area that is so protected from wind-stirring that it has no annual periods of complete mixing, and remains chemically stratified throughout the year. These lakes may be protected from mixing by a sheltered surrounding landscape (e.g., a deep basin) or by adjacent tree cover. Meromictic lakes in New York freeze over and become inversely stratified in the winter (coldest water at the surface); they pass through spring, and fall periods of isothermy without circulating. Meromictic lakes frequently have dichothermic stratification, meaning that the minimum temperature occurs in the middle stratum. The stagnant waters in the lower part of a meromictic lake become heavily loaded with dissolved salts, and lack oxygen. Chemical stratification is most often measured by salinity gradients, or total cation and anion concentrations. Gradients may be present for chemicals, such as hydrogen sulfide, ammonia, phosphorus, or iron. Flushing rates are typically low.

Meromictic lakes must remain permanently chemically stratified (i.e., have a chemocline) throughout the year. The chemical stratification is usually, but not necessarily, correlated with low dissolved oxygen at the bottom. Additionally, these lakes are usually protected from mixing by their large depths relative to surface area and/or their sheltered landscapes or adjacent tree cover. Chemical stratification may be interpreted broadly, but is apparently most often measured by salinity gradients or total cation and anion concentrations.

Known examples of this community have been found at elevations between 418 feet and 1,670 feet.

Merotmictic lakes are scenic year-round, but the characteristic green color is most evident during ice-free months.

This figure helps visualize the structure and "look" or "feel" of a typical Meromictic Lake. Each bar represents the amount of "coverage" for all the species growing at that height. Because layers overlap (shrubs may grow under trees, for example), the shaded regions can add up to more than 100%.

Pendl, M.P. and K.M Stewart. 1986. Variations in carbon fractions within a dimictic and meromictic basin of the Junius Ponds, New York. Freshwater Biology 16: 539-555.