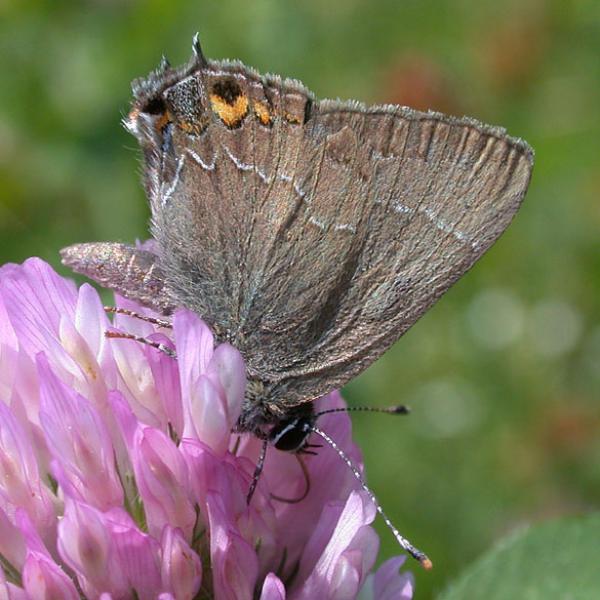 State Conservation Status Rank
S2S4
Imperiled or Vulnerable in New York, or Apparently secure - Conservation status is uncertain; could be very vulnerable, or vulnerable, to disappearing from New York due to rarity or other factors, or could be uncommon but not rare in New York. More information is needed to assign either S2, S3 or S4.
Global Conservation Status Rank
G4G5T4
Apparently Secure globally – The subspecies/variety is uncommon in the world but not rare; usually widespread, but may be rare in some parts of its range; possibly some cause for long-term concern due to declines or other factors. (The species as a whole is common globally.)

The Northern Oak Hairstreak is thought to be a canopy dwelling species (Gagliardi et al. 2017).

In most cases, the protection and preservation of habitat should be the main focus of preserving this species. Managers should consider ensuring that nectar species are present. Implement a cutting or mowing schedule that maintains or increases available native nectar sources, such as milkweeds and dogbanes, when they are in flower. Additionally, the use of Bt and Dimilin should be closely monitored to prevent accidental mortality of rare or threatened Lepidoptera.

More research is needed to identify which species of oaks the larvae eat and whether they have any other special needs. It would also be very useful to document the sensitivity of the larvae to realistic doses of Bt such as are applied for Spongy Moth suppression. The available evidence for other butterflies in the subfamily Theclinae suggests that this species would be sensitive to Bt (Schweitzer 2004; Wagner et al. 1996), but sensitivity of caterpillars to Bt is variable, even among species in the same genus (Peacock et al. 1998).

This species is typically found within oak forests or along their edge (Conserve Wildlife Foundation of New Jersey 2021). In some cases, it may be found where pitch pine and scrub oak may be present, but this butterfly is not generally found in classic pine barrens habitats. It may also turn up around more mixed forests.

This species is mostly found in the lower Hudson Valley and on Long Island in New York State. The distribution also includes the Albany Pine Bush where one was collected in 1979. Historically, it was present in at least the Ithaca area, but according to Robert Dirig there have not been reports in the area since 1970, after collections in 1890, 1967, and 1970. Since 2000, there have been credible reports from Orange, Westchester, Rockland, and Suffolk counties. As Shapiro (1974) noted, the habitat is not rare in southeastern New York.

The original specimen supposedly came from Ontario, Canada. However, since 1900 this subspecies has been found from the vicinity of Boston, Massachusetts (not before about 1980) south though coastal New England, southeastern New York, and then more widely from New Jersey through most of Georgia and west into Texas and Oklahoma. While it does occur in much of the lower Midwest east into Ohio and widely in the southeastern states, this species is unknown from the mountains.

Note the inwardly pointed "v" mark next to the largest white spot on the hindwing beneath and the prominent "M" (or "W") formed by the inner most line. These two markings together should be diagnostic. There is never any blue above. Live individuals always land with the wings closed. The flight season is also a clue to species, as this species will only be seen in or near New York in June and about the first half of July.

This should be identified as an adult, but an expert on hairstreaks might be able to identify the larva. See Allen et al. (2005).

The Northern Oak Hairstreak is thought to be a canopy dwelling species (Gagliardi et al. 2017), though adults can commonly be found feeding on flower nectar in the late afternoon (Opler and Krizek 1984).

The adults occur for less than a month in any given year, from about mid-June into mid-July. They often start a few days earlier than the other single-brooded early summer hairstreaks, but commonly occur with the others. The eggs overwinter on oaks and the larvae feed on the new growth in spring, probably finishing about the first of June in most years. There is only one brood in all parts of the range of this species. The adults visit flowers most often late in the day, usually after 16:00 hours.

The time of year you would expect to find Northern Oak Hairstreak present, reproducing, larvae present and active, and eggs present outside adult in New York. 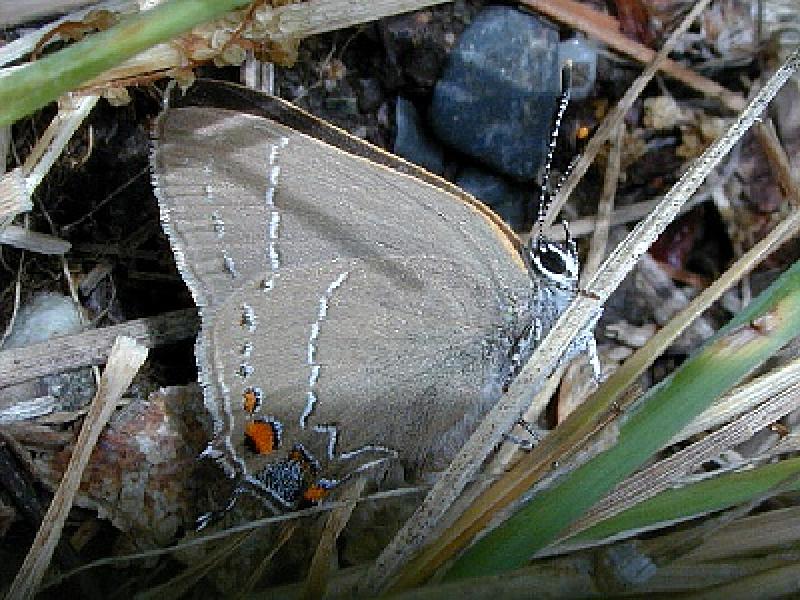