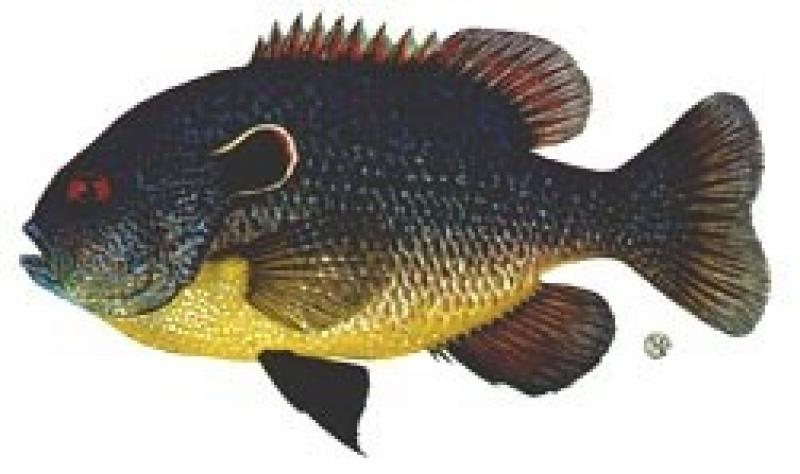 Northern sunfish have a restricted range and have declined so much that they are no longer detectable in some areas. They are threatened by hybridization with other Lepomis species, invasive fish, and intensive agricultural practices (and other land uses) that contribute to poor water quality from runoff, pollution, and siltation.

Recent trends for this species are unknown.

Northern sunfish are estimated to have declined by so much that, besides for hybrids with other Lepomis species, they are no longer detectable during surveys.

Northern sunfish are threatened by poor land use practices that reduce water quality through runoff, pollution, and siltation. Invasive fish are also a problem for them. The existing population would benefit from continued monitoring. Repeat surveys of locations where they had been previously documented are needed.

Northern sunfish are threatened by siltation caused by runoff from agriculture and other land use activities that may disturb the soil layer and lead to erosion. Intensive agricultural practices, for instance, may lead to high silt loading, nitrification, and variable water flows (Wells and Haynes 2007). Land development and agriculture may also result in reduced water quality from pollution and runoff. Invasive species are also a primary threat. The introduced round goby (Neogobius melanostomus) is a known nest predator of northern sunfish. The spread of a native competitor, the green sunfish (Lepomis cyanellus), as well as competition for spawning habitat with other more abundant Lepomis species may be problematic as well. Hybridization with bluegill (Lepomis macrochirus) is likely a major threat to the perpetuation of the northern sunfish (Sanderson-Kilchenstein 2015). A study of the last remaining native population in the state captured eight hybrids and no pure northern sunfish (Sanderson-Kilchenstein 2015). The small remaining population in New York state likely has difficulty finding mates and the females, which resemble bluegills, may be accepted as mates by the male bluegills (Sanderson-Kilchenstein 2015).

Measures are needed to reduce runoff into areas used by the sunfish. When construction is needed near water systems, measures should be taken to reduce siltation as much as possible. This could include disturbing only the work area to maintain as much vegetation as possible to reduce runoff, working in phases to allow for more centralized control of sedimentation, using sediment traps or ditches to direct runoff away from the river, stabilizing soil by seeding, mulching, use of blankets, or wool binders. Protect slopes by using silt fences or fiber rolls. Logging and farming practices near waters can increase siltation or pollution. Encourage practices that maintain a riparian buffer to control pollution.
Competition with non-native species such as round goby and green sunfish pose a threat in parts of the northern sunfish range. It is difficult to control the movement of both species. It is recommended to monitor round goby movements and green sunfish in New York. Prohibit the use of round gobies in the bait trade. Trapping may be useful in some systems, but eradication is not likely. The use of chemicals, such as rotenone, is not advisable in areas with northern sunfish because all fish will succumb to the chemical. In the Great Chazy River, the Whiteside Dam may be a barrier that keeps non-native species from invading the known stretch of the river with northern sunfish (Maxwell and Carlson 2017).
Northern sunfish are not likely to be over fished because of their small size, but signage may still be helpful in fishing areas to reduce accidental takes (Maxwell and Carlson 2017).

Previously occurring locations such as Johnson Creek and Oak Orchard Creek should be resurveyed and the population in Tonawanda Creek and Great Chazy River should be monitored by periodic surveys to gain data on short-term trends. Genetic studies may be useful to determine how hybridization has affected the population.

The northern sunfish is associated with densely vegetated areas of slow-moving rivers and creeks. They may also linger around submerged woody debris. Northern sunfish tend to stay in shallow areas in clear, warm water, and avoids swift currents (Wells and Haynes 2007). Some habitats include backwaters where submerged aquatic vegetation is present, or in turbid streams where emergent vegetation is present. Preferred substrates include sand and gravel, although silt is sometimes used.

The northern sunfish's distribution in New York State is highly restricted. It is currently known only from an introduced population in Cayuga Creek in southern Niagara County and two native populations: a 6 km segment of Tonawanda Creek in Niagara and Erie counties (Carlson 2012) and Great Chazy River (Maxwell and Carlson (2017). Two records of northern sunfish were also found at a historically known area of Johnson Creek in Orleans County. It is unclear whether these represent a population or were incidental. Historically they were found in the Lake Erie and Lake Ontario watersheds in western New York and the Oswego watershed in central New York.

The northern sunfish is restricted in range to certain large streams in the northern parts of east-central North America. Its range includes southern Quebec and Ontario, the Great Lakes Region (including Western New York), and the Mississippi River drainage.

The northern sunfish is a colorful fish that looks similar to a pumpkinseed and is laterally compressed. They have an elongated gill flap giving the appearance of an ear.

The northern sunfish looks similar to a pumpkinseed. It is small and thin with a deep body that averages 4 to 4.5 inches in length. It is a beautifully colored fish with an olive to rusty-brown back, orange stomach, and blue-green bars on the sides of the head. They also have an elongated gill flap giving the appearance of a long ear.

The most useful characters for identification are the short, round pectoral fins and the elongated gill flap that is edged in only white.

Adults are easiest to identify; especially the males.

Males nest in colonies and create nests resembling saucers in shallow waters with sand or gravel bottoms. Solitary nesting occurs occasionally as well. Males also care for the eggs by fanning them to remove silt and they guard them from predators. Spawning occurs in groups.

Northern sunfish are more active during the warm months.

The time of year you would expect to find Northern Sunfish active and reproducing in New York.

This guide was authored by: Kelly A. Perkins and Hollie Y. Shaw