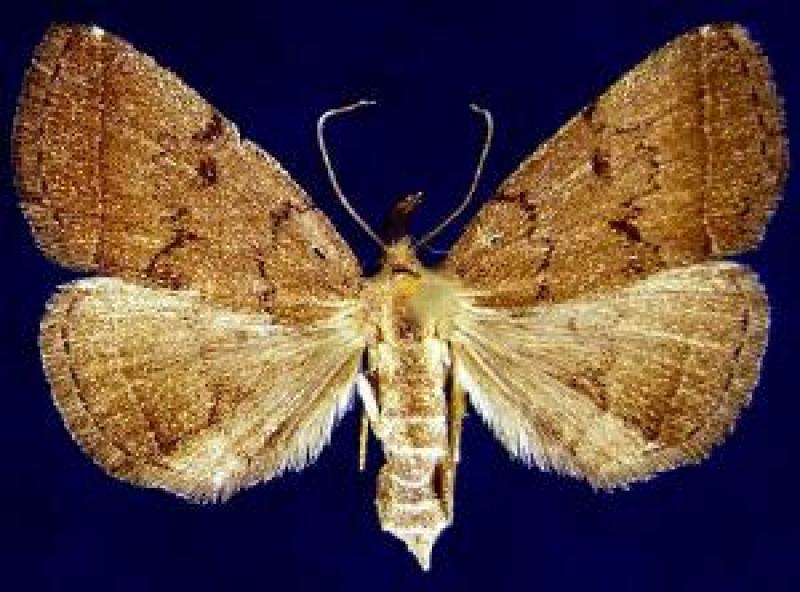 The Pine Barrens Zanclognatha is found in sandy pitch pine-scrub oak barrens with a pine canopy present. The habitat, when managing for this species, is generally maintained with fire.

This species is locally quite numerous and widespread in the Albany Pine Bush, but it is not found in many places in New York. Some, if not all habitats, require some management which is typically fire.

The short-term trends indicate that the populations are stable.

The long-term trends indicate that there has been a moderate to substantial decline (decline of 25% to 75%) of populations of this species.

Some of the habitat is protected, but other sites are vulnerable to development. Wildfires, as well as fire suppression, could also be threats.

The habitat for this species is generally fire maintained, but refugia (unburned patches) are always needed since fires consume the litter where all stages apparently occur. This species may prefer less recently burned areas and therefore require more shaded places than most barrens moths.

The precise habitat and food needs are still not well understood. The habitats in Clinton County where this species is reported to occur are very atypical and they are well outside the known range of the species (Dale Schweitzer). Therefore, the identity of the northernmost specimens from Clinton County should be re-verified, as these may be a more northern unnamed species such as the one that passes for Zanclognatha martha in Wisconsin.

The Pine Barrens Zanclognatha is generally found in inland sandy pitch pine-scrub oak barrens and is usually most numerous where there is substantial leaf litter and a pine canopy, as typical in places that have not burned recently. The species seems to prefer more canopy than almost all other pine barrens specialists. It occasionally turns up in other habitats with pitch pine in adjacent states and might be found in similar habitats in New York. If the Clinton County occurrences are verified as this species, then these habitats are quite unusual for it.

This species occurs from Albany southward, but has not been documented on Long Island. Additional habitat where the species has not been verified is in the Saratoga and Glens Falls sand plains. Some specimens have been identified as this species from farther north (Clinton County), but these should be re-verified. This species would be expected on higher ridgetop pitch pine stands in southeastern New York because it occurs in such habitats in northeastern Pennsylvania.

This species widely occurs in the Pinelands portion of southern New Jersey, and also locally in inland (not coastal) sand plain pine barrens of New York and New England, north to central New Hampshire and southern Maine, also in eastern Pennsylvania (with pitch pine, but the habitat is varied), southern Ohio, and in the mountains from Virginia to northern Georgia and probably Tennessee. It may occur sometimes with other species of pine in mountains. As far as it is known, various specimens from beyond this range to the north and west have all proven to be members of the Zanclognatha protumnusalis complex. Reports from Wisconsin (and possibly Clinton County in northernmost New York) apparently refer to an unnamed similarly sized, differently colored, earlier flying species.

Compared to most species of the genus, this is a relatively large (25-30 mm), uniformly brownish-gray species with a violet tinge. The forewings and hindwings are about the same color and the outer portion beyond the postmedian line is darker than the basal and median portions of the wings. The dark spot on the forewing varies in intensity. Specimens on which the ground color is not a virtually exact match for those illustrations are some other species. Forbes (1954) also provides a good key, but occasional specimens of the Zanclognatha protumnusalis complex are difficult. They will be browner and not violet tinged but some may approach the size of Z. martha.

The size and general coloration of the adult are the characters most useful for identification. Rings et al. (1992) contains a very good illustration. If the color and size do not match this illustration exactly, then strongly suspect another species. Zanclognatha martha has a darker base color than similar species (Wagner and McCabe 2011). The distal quarter of the forewing is darkened and there is a weakened subterminal line. The genitalia of Z. martha can also distinguish it from similar species.

Only adults can be identified at present.

The adults are nocturnal and are readily collected at either bait or blacklights.

The larvae apparently feed in leaf and needle litter, but their food in the wild has not been documented. It is possible, but not likely, that they feed either on needles or lichens in pine trees.

In New York, and throughout much of the range, adults occur mostly from about mid to late July and probably into early August. The more northern unnamed species that sometimes passes for Pine Barrens Zanclognatha west of New York starts in June. A few Z. martha could possibly turn up in late June around Albany in very advanced seasons and the flight season will probably shift to earlier dates in the future. This species does not appear to have a second brood anywhere in its range. The larvae occur from mid-summer to the following June and the pupal stage probably lasts less than a month.

The time of year you would expect to find Pine Barrens Zanclognatha reproducing and pupae or prepupae present in New York.

Wagner, D.L. and T.L. McCabe. 2011. A new Zanclognatha from eastern North America and a preliminary key to the larvae of the genus (Lepidoptera, Erebidae, Herminiinae). ZooKeys 149: 89–101.

Information for this guide was last updated on: May 12, 2021