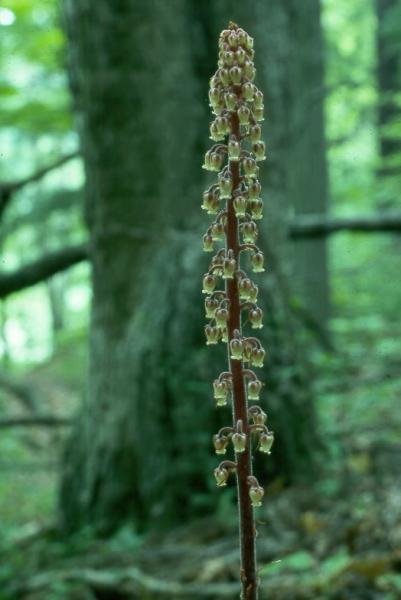 Giant pinedrops also has the common name Albany pinedrops because some of the earliest collections were from the Albany, NY area. It was first collected in Albany in 1817 by Edwin James, a Vermont botanist who came to Albany in 1816 after graduating from Middlebury College. He studied botany with state botanist John Torrey but eventually spent most of his career in the western US (Wikipedia contributors). He completed the first recorded ascent of Pikes Peak in Colorado in 1820 and on the trip was the first to describe the blue columbine, Colorado's state flower (Wikipedia contributors).

There are five existing populations with no more than 25 plants each. There are 30 historical occurrences mostly from the 1800s and early 1900s. One population from the 1970s and one from the 1990s have not been found again.

Populations seem to be holding steady at low numbers.

This species was known from many sites across the state but saw a large decline in the last half of the 20th century. Only a handful of sites are known today.

One population is subject to flooding during severe flood events. Two populations are close to trails and could easily be trampled or picked. This species may respond to disturbance and may be declining due to succession.

Reroute trails away from plants.

Research is ongoing into the relationship of this plant with soil mycorrhizae in order to explain the sharp decline in populations east of the Mississippi. More research could be done to determine habitat requirements.

In New York (as in the rest of its range) Pterospora andromedea is known from a wide diversity of forested habitats. Lacking chlorophyll, it it derives nutrients through mycorrhizal (fungal) connections with tree roots - most notably pines and other conifers, though it may also parasitize beech (Fagus grandifolia) or other hardwoods. In New York it has been found in river gorges, steep south-facing slopes, mature forests, and second-growth forests, most often where white pine is a component of the overstory (New York Natural Heritage Program 2010). Evergreen to mixed evergreen-deciduous forests (Haines 2011). Moist to dry, often deep humus of mixed-deciduous or coniferous forests (sometimes on calcareous substrates) (FNA 2008). Nearly alwasy in habitats with conifers (especially pines but also hemlock, spruce, fir, white=cedar, in dryish (or rocky) soil, often with common juniper and sometimes aspen or birch (Voss 1996). Coniferous woods, chiefly in dry soil (Gleason & Cronquist 1991).

There are records of Giant Pine-drops scattered across most of New York north of the lower Hudson Valley.

Giant Pine-drops is found in Alaska, most of Canada and the western U.S. states, and east along the northern tier of states from Michigan to New Hampshire.

Ptersopora andromedea is a native, herbaceous, saprophytic perennial that grows from a truffle fungus, which in turn is most often associated with Pinus strobus. It has one to several simple, erect, herbaceous glandular-hairy stems, reaching 30 cm to 1 m tall. Lacking chlorophyll, its stems are pink to reddish or maroon (and eventually brownish) in color and bear numerous scale-like leaves. The numerous flowers are stalked, nodding and borne in an elongated unbranched terminal inflorescence (raceme). The flowers are bell-shaped with white petals 6 to 9 mm long and reddish to maroon sepals 2 to 3 mm long, which form a cap-like whorl encompassing the flower bases. The fruits are persistent, thin-segmented capsules 5 to 10 mm wide by 7 to 14 mm long, which split at maturity, revealing tiny (0.2 to 0.5 mm) seeds with membranous wings. Pine-drops is parasitic upon the roots of members of the Pinaceae, specifically Pinus strobus in New York. American beech and other hardwoods have been reported as hosts elsewhere. (Higman and Penskar 1999)

Ptersopora andromedea is a native, harbaceous, saprophytic perennial that grows from a fungus, which in turn is associated with Pinus strobus. It has one to several simple, erect, herbaceous glandular-hairy stems, reaching 30 cm to 1 m tall. The stems are pink to reddish or maroon (and eventually brownish) colored and bear numerous scale-like leaves. The numerous flowers are stalked, nodding and borne in an elongated unbranched terminal inflorescence (raceme) with a stout, 0.5 to 1.5 cm axis. The flowers are bell-shaped (campanulate) have white petals (corolla) 6 to 9 mm long and reddish to maroon sepals (2 to 3 mm long) forming a cap like whorl encompassing their base. The fruits are persistent, thin-segmented capsules 5 to 10 mm by 7 to 14 mm which split at maturity (dehiscent), enclosing tiny (0.2 to 0.5 mm) seeds with membranous wings. Pine-drops is parasitic upon the roots of members of the Pinaceae, specifically Pinus strobus in New York. (American beech or other hardwoods have been reported as hosts elsewhere). (Higman and Penskar 1999)

There are superficially similar saprophyte species (Monotropa uniflora, M .hypopithys, and Epifagus virginiana) occuring in New York but with even cursory examination they are notably distinctive. Monotropa species are typically half the size of Pterospora or smaller and have only one flower per stem that becomes erect in fruit. Epifagus plants are often much branched when they are large and the stems are cream, tan or purple-striped and mostly smooth and hairless. Their flowers are tubular and the species is only parasitic on American beech. In contrast, Pterospora is large, glandular-hairy with numerous flowers in a elongated terminal inflorescence (raceme), and is associated most commonly with pines or other conifer species.

Pterospora plants may go many years without sending up flowering/fruiting stalks. Plants appear infrequently, only emerging when environmental conditions are ideal. It flowers in late June through August, with a typically optimal period from July through mid- to late August when the flowers and fruits are in their prime. The tough, dry fruiting stems can be may be found well into winter and may persist for a year or more if not knocked over or removed. (Higman and Penskar 1999).

The time of year you would expect to find Pine Drops flowering and fruiting in New York. 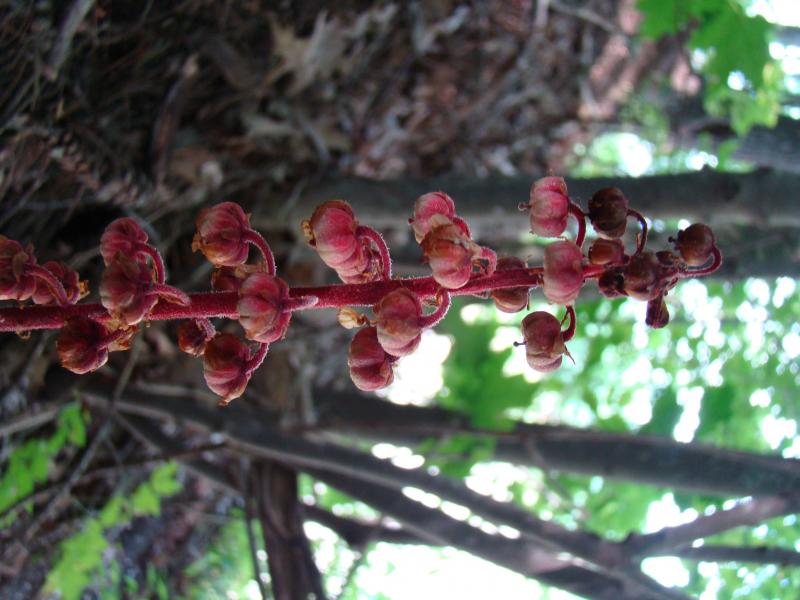 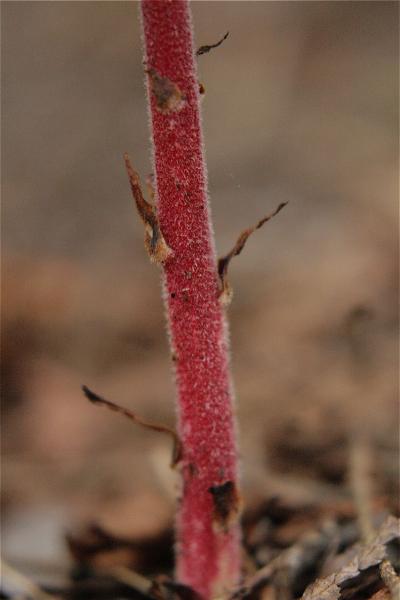 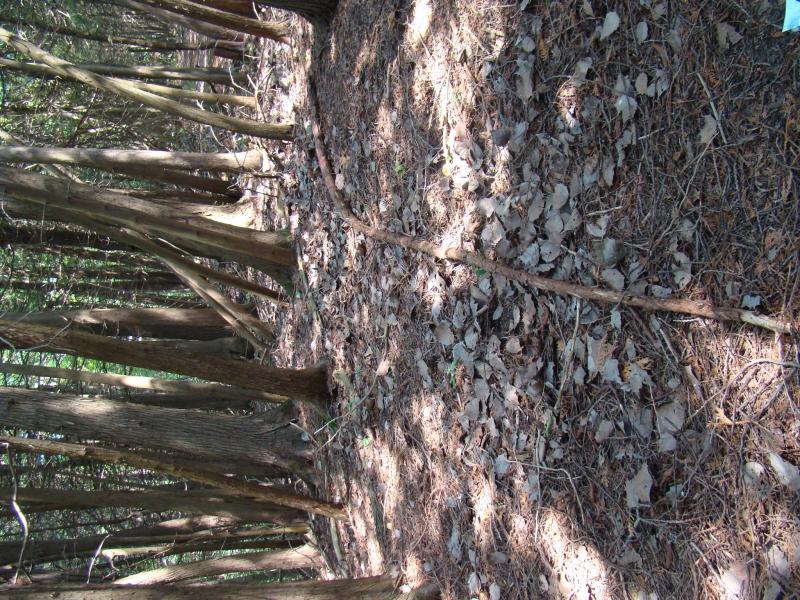 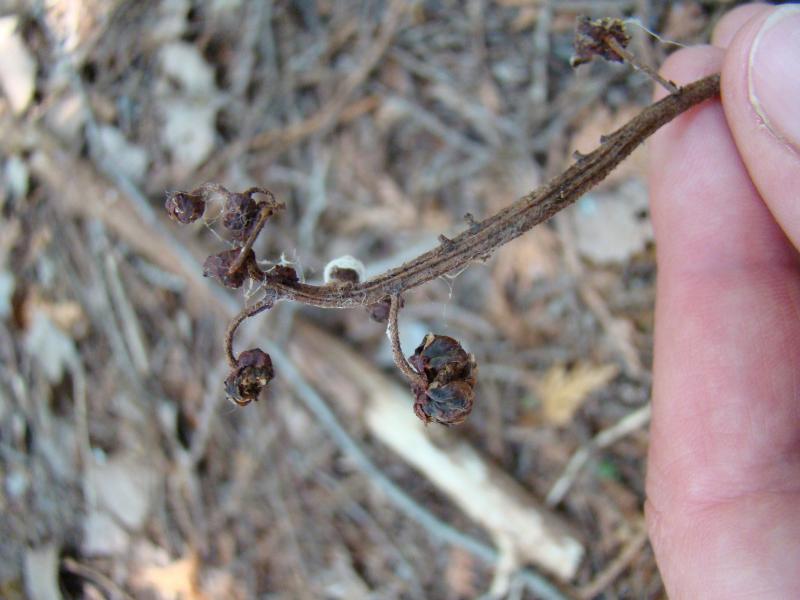