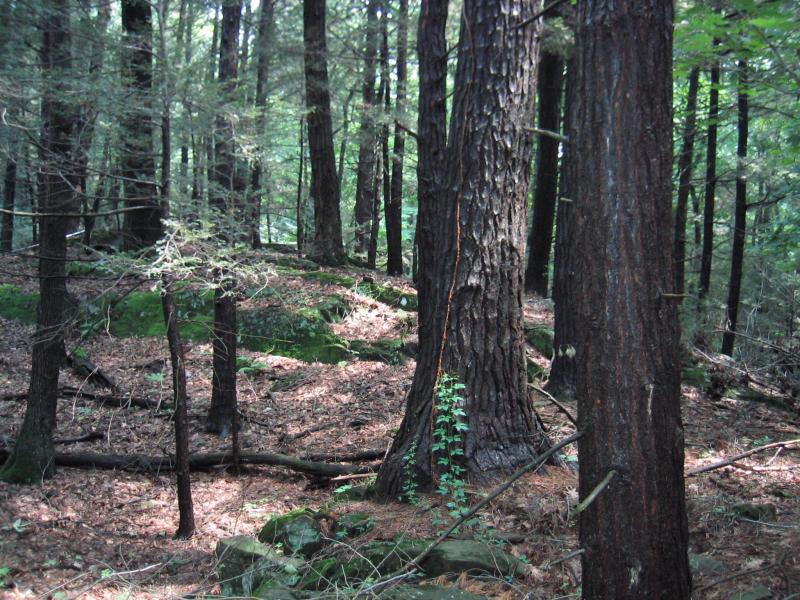 The Nature Conservancy's first preserve was a hemlock-hardwood forest. Mianus River Gorge Preserve, purchased in 1955, is located in Bedford, Westchester County, New York. A majestic stand of 350-year-old hemlock trees, some up to 100 feet tall, are found in the preserve. For information on how to visit the preserve, go to http://www.nature.org/wherewework/northamerica/ states/newyork/preserves/art12419.html.

There are several thousand occurrences statewide. Many documented occurrences have good viability and many are protected on public land or private conservation land. This community has a statewide distribution and includes several very large, high quality, old-growth examples. The current trend of this community is probably declining due to moderate and imminent threats related to hemlock woolly adelgid and development pressure.

The number and acreage of hemlock-northern hardwood forests in New York have declined moderately in recent decades as a result of logging, agriculture, and other development. Several examples may have been lost to hemlock woolly adelgid.

The number and acreage of hemlock-northern hardwood forests in New York have declined substantially from historical numbers likely correlated with past logging, agiculture, and other development. Several examples may have been lost to hemlock woolly adelgid.

Threats to forests in general include changes in land use (e.g., clearing for development), forest fragmentation (e.g., roads), and invasive species (e.g., insects, diseases, and plants). Other threats may include over-browsing by deer, fire suppression, and air pollution (e.g., ozone and acidic deposition). When occurring as expansive forests, the largest threat to the integrity of hemlock-northern hardwood forests are activities that fragment the forest into smaller pieces. These activities, such as road building and other development, restrict the movement of species and seeds throughout the entire forest, an effect that often results in loss of those species that require larger blocks of habitat (e.g., black bear, bobcat, certain birds). Additionally, fragmented forests provide decreased benefits to neighboring societies of services these societies often substantially depend on (e.g., clean water, mitigation of floods and droughts, pollination in agricultural fields, and pest control) (Daily et al. 1997). Hemlock woolly adelgid (Adelges tsugae) is an exotic species that could potentially have a devastating effect on hemlock trees in New York. This exotic "sap-sucker" has only recently begun to spread through the forests of the northeastern United States. Without control measures, insect-infected trees will probably die within three to four years (McClure et al. 2001, Bishop 2002, Ward et al. 2004). Although current adelgid infestations are primarily confined to southeastern New York, in 2002 adelgid infestation was newly observed in Monroe County (USDA Forest Service 2002).

Management should focus on activities that help maintain regeneration of the species associated with this community. Develop a plan to control or eliminate hemlock woolly adelgid. Deer have been shown to have negative effects on forest understories (Miller et al. 1992, Augustine and French 1998, Knight 2003) and management efforts should strive to ensure that regenerating trees and shrubs are not so heavily browsed that they cannot replace overstory trees. Avoid cutting old-growth examples and encourage selective logging of areas that are under active forestry.

Inventory any remaining large or old-growth examples across the state.

Regularly assess the presence and degree of impact that hemlock woolly adelgid has on this forest community.

This community is currently known from across the state north of the Coastal Plain. Numerous patches of hemlock-northern hardwood forest are known from the Catskill Mountains, the Shawangunk Mountains, the Hudson Highlands, the Rensselaer Plateau, the Adirondack Mountains, the southern Finger Lakes region, and the river valleys that flow into Lake Erie in western New York.

The range of this community probably spans most of the northern and central Appalachian Mountains, concentrated at the northern end of this range, where "northern" hardwoods are dominant over "southern" hardwoods. This range is estimated to span north to southern Ontario, west to Minnesota, southwest to Ohio and Kentucky, south to Tennessee and North Carolina, and northeast to Nova Scotia.

A mixed forest that typically occurs on middle to lower slopes of ravines, on cool, mid-elevation slopes, and on moist, well-drained sites at the margins of swamps. Eastern hemlock (Tsuga canadensis) is codominant with any one to three of the following tree species: American beech (Fagus grandifolia), sugar maple (Acer saccharum), red maple (A. rubrum), black cherry (Prunus serotina), white pine (Pinus strobus), yellow birch (Betula alleghaniensis), black birch (B. lenta), red oak (Quercus rubra), and basswood (Tilia americana). The relative cover of eastern hemlock is quite variable, ranging from nearly pure stands in some steep ravines to as little as 20% of the canopy cover. Striped maple (Acer pensylvanicum) is often prominent as a mid-story tree. This is a broadly defined and very widespread community with many variants. For example, in the Hudson Valley, eastern hemlock is sometimes codominant with red oak; in the Adirondacks, yellow birch and sugar maple are sometimes codominant.

A close-canopy forest with eastern hemlock present in the canopy. Hemlock may occur in nearly pure stands, with nearly 100% canopy cover, or reach an abundance as low as 20% canopy cover, intermingled with other canopy trees.

The sheltered coves that hemlock-northern hardwood forests often inhabit offer a pleasant escape from the leafless deciduous forests in the winter. Throughout the winter, birds can be found foraging in bark crevices and among the green needles of hemlock trees. 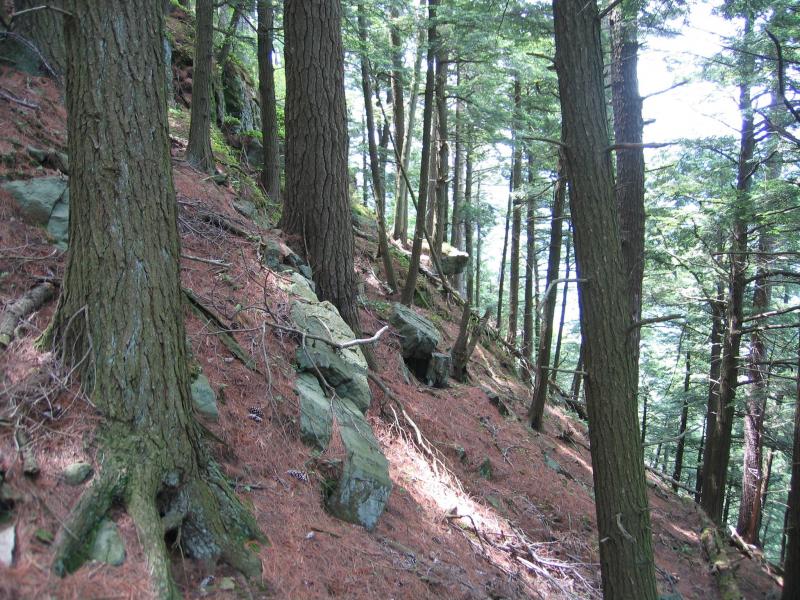 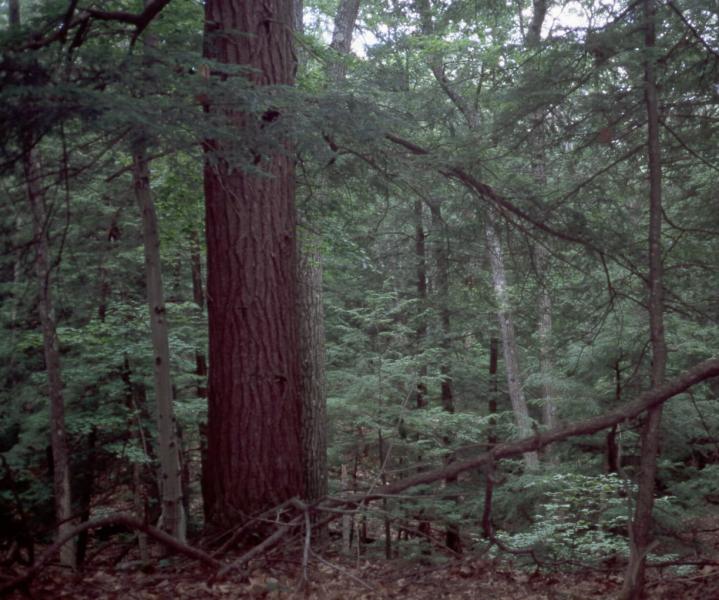 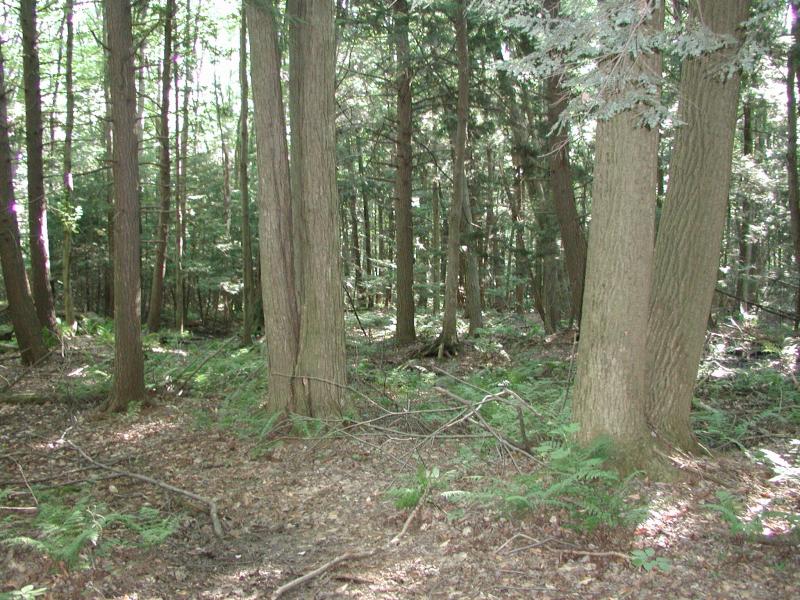 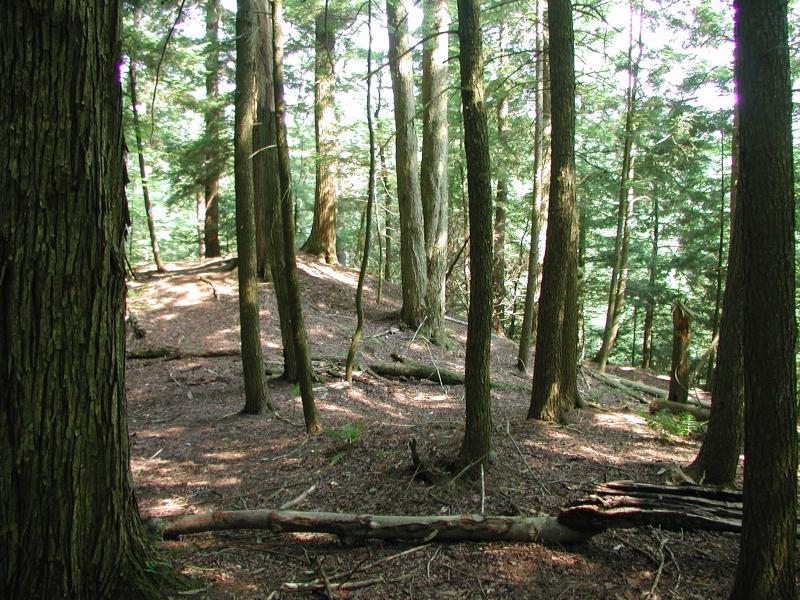 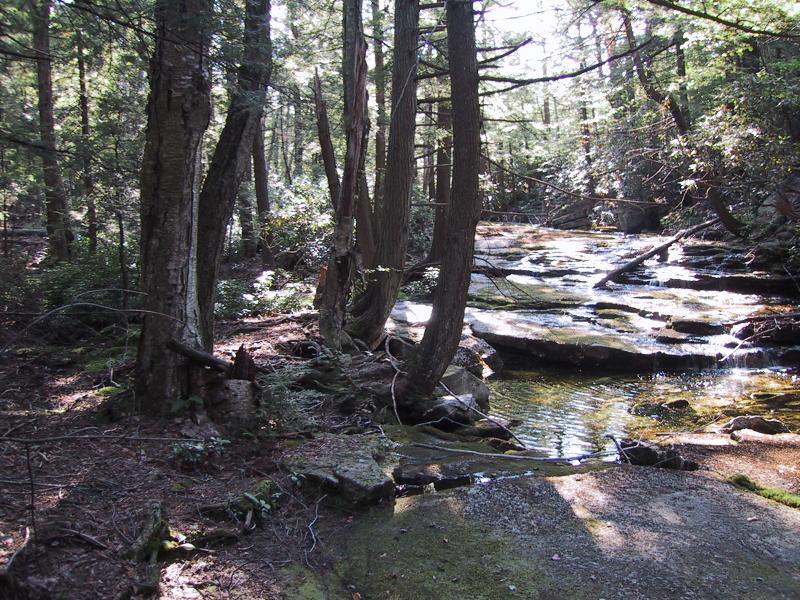 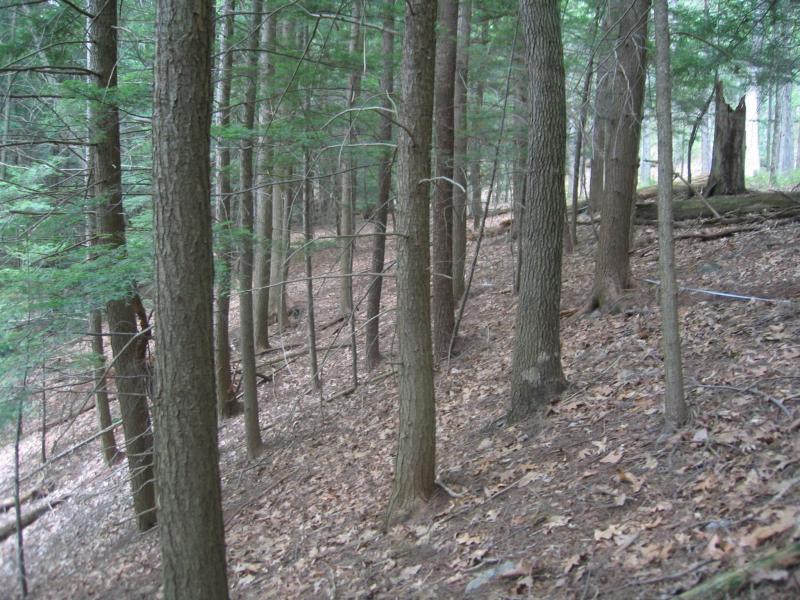 This figure helps visualize the structure and "look" or "feel" of a typical Hemlock-Northern Hardwood Forest. Each bar represents the amount of "coverage" for all the species growing at that height. Because layers overlap (shrubs may grow under trees, for example), the shaded regions can add up to more than 100%.