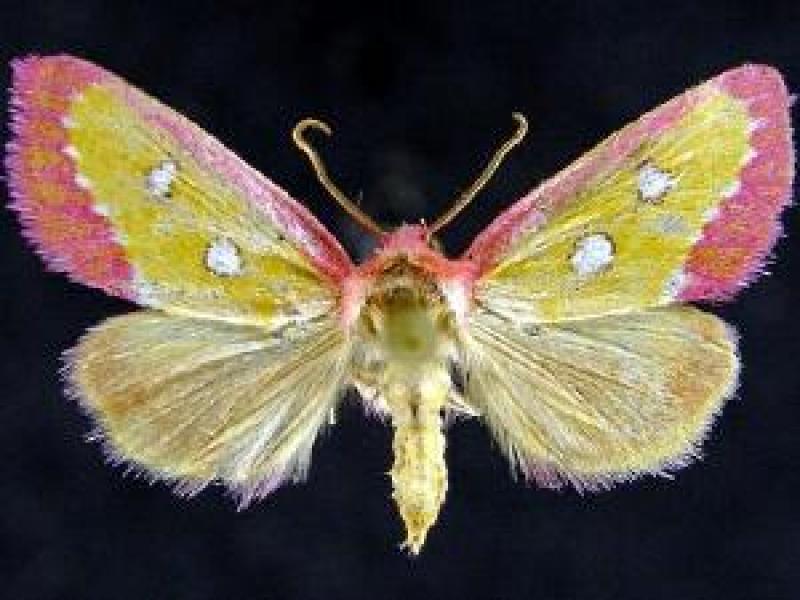 Pink star moths are known to have two broods each year, with a first brood in the spring (April/May) and another in summer (July/August) (Covell 1984).

Pink star moth has been found at one location in New York on Long Island. Forbes (1954) and Covell (1984) consider this species rare in the northern part of its range.

The long term trends are unknown except that Covell (1984) stated that this species is rare in the northern portion of its range.

Potential threats include insecticide use. The use of insecticides and biocontrols can also eliminate or greatly impact many non-target species populations.

Minimizing lighting to maintain dark sky conditions would also be beneficial. When lighting is necessary, it's best to use lights that emit red or yellow light because insects are generally not attracted to those colors. However, many sodium lights, which emit yellow light, are so bright that they do attract some insects. The best lighting appears to be low pressure sodium lights which have little effect on flying insects (Schweitzer et al. 2011).

Insecticide use should be avoided when possible if rare species are present. When insecticide use cannot be avoided, careful planning along with consistent rare species monitoring, can result in successful eradication of the target species without eliminating rare species. A biocontrol alternative is Bacillus thuringiensis (Btk) for some target species, such as spongy moth. However, sensitivity to Btk varies among native species and this option should be fully researched for treatment timing and regimes and weighed with other options to have the least impact on native lepidopteran populations (Schweitzer et al. 2011).

Additional research is needed to determine the habitat requirements and larval foodplants.

This species has been found in Suffolk County on Long Island.

Pink star moths can be found from southern Maine south to Florida and west to Missouri and Texas (Covell 1984).

According to Covell (1984), the foodplant is unknown.

Covell (1984) states that there are two broods each year: April to May and July to August. Specific information about the best times to find this species is not available for New York populations at this time.

The time of year you would expect to find Pink Star Moth present and active in New York.