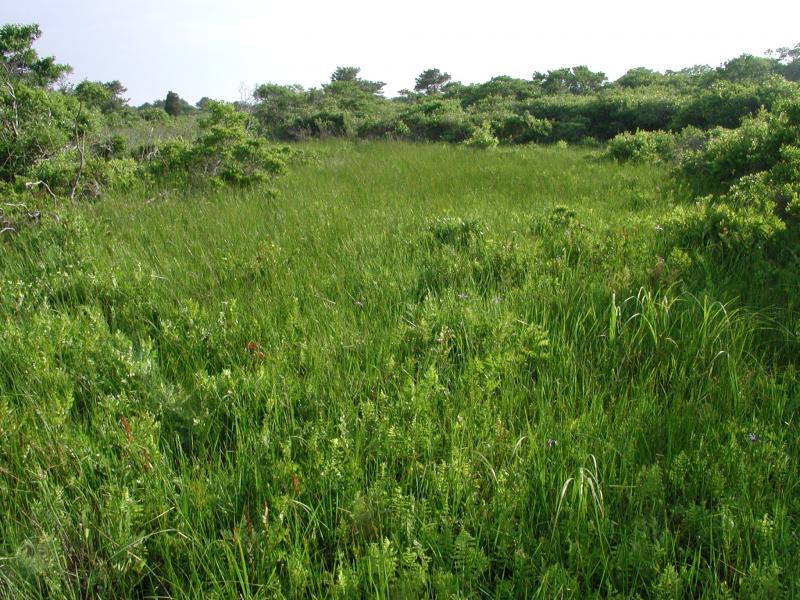 Did you know that freshwater peatlands can develop right next to a salt marsh? It can, but this type of natural community is very rare. It occupies a unique habitat where there are areas of freshwater seepage adjacent to salt marshes. Possibly, there may only be around 15 sites from Virginia to Massachusetts where this natural community occurs. Also, each of these sites only occupies a few acres at best.

There are very few occurrences of sea level fens in New York. They are all small in size (acreage) and the trend is toward a decrease in size. Most are threatened in a vulnerable, densely-populated landscape, however, some sites are located in more protected, conservation areas.

The numbers and acreage of sea level fens in New York have probably declined in recent decades as a result of threats from development, changes to natural hydrology, decline in water quality, and spread of invasive species.

The numbers and acreage of sea level fens in New York have probably declined from historical numbers likely correlated with the alteration to the natural hydrology (ditching, draining, and impoundments) and decline in water quality as a result of settlement and development. Given the unique setting of having sufficient freshwater discharge at the upper margin of a salt marsh, this community was probably always rare.

The major threats to the sea level fen community are alterations to the natural hydrology from a variety of sources and the spread of invasive species. The hydrology of this natural community type has been altered for decades. Alterations have included: mosquito ditching, the dredging of channels for boat traffic, filling in of the wetland, and draw down of the water table from an increased demand for freshwater. The invasion of common reed (Phragmites australis) into these communities is also a significant threat. Other threats include non-point source pollution, pesticide use, and other construction such as roads.

Management of sea level fens should include the removal and control of common reed (Phragmites australis). Where practical, establish and maintain a natural wetland buffer to reduce storm-water, pollution, and nutrient run-off, while simultaneously capturing sediments before they reach the wetland. Buffer width should take into account the erodibility of the surrounding soils, slope steepness, and current land use. Wetlands protected under Article 24 are known as New York State "regulated" wetlands. The regulated area includes the wetlands themselves, as well as a protective buffer or "adjacent area" extending 100 feet landward of the wetland boundary (NYS DEC 1995). If possible, minimize the number and size of impervious surfaces in the surrounding landscape. Avoid habitat alteration within the wetland and surrounding landscape. For example, roads and trails should be routed around wetlands, and ideally not pass through the buffer area. If the wetland must be crossed, then bridges and boardwalks are preferred over filling. Restore past impacts, such as removing obsolete impoundments and ditches in order to restore the natural hydrology. Prevent the spread of invasive species into the wetland through appropriate direct management, and by minimizing potential dispersal corridors, such as roads.

Survey for additional occurrences, especially elsewhere in the Peconic Bay Region of Long Island and Long Island's South Shore Estuaries. Sites supporting indicator species such as spikerush (Eleocharis rostellata) and twig rush (Cladium mariscoides) should be evaluated. In addition, more surveys of both plants and animals are needed as well as plots for community documentation at known locations.

Research is needed to fill information gaps about sea level fens, especially to advance our understanding of their classification, ecological processes, hydrology, floristic variation, characteristic fauna, and fen development and succession. This research will provide the basic facts necessary to assess how human alterations in the landscape affect these types of fens. Research is also needed to evaluate the native status of some stands of common reed (Phragmites australis ssp. americanus).

Sea level fens are restricted to the estuarine portion of the coastal lowlands. It occupies a unique habitat where there are areas of freshwater seepage adjacent to salt marshes. There are about six documented occurrences in Suffolk county. The historical range of this natural community is unknown.

This community is restricted to a unique habitat along the mid and north atlantic coastal plain: areas of freshwater seepage adjacent to salt marshes. Presently, occurrences are known from Massachusetts, Connecticut, New York, New Jersey, Delaware, Virginia, and Rhode Island, with possible occurrences in Maryland. This community may be more widespread but not documented (NatureServe Explorer 2009).

This is a small patch, sedge-dominated fen community that occurs at the upper edge of salt marsh complexes just above sea level where there is adjoining freshwater seepage. Soils are those of a peatland with deep sedgy peat underlain by deep sand or gravel. The fen is herb dominated (nearly 100% cover) but can have trees and shrubs at low percent cover. Herbaceous species include spikerush (Eleocharis rostellata), twig-rush (Cladium mariscoides), and three-square (Schoenoplectus pungens). Typical trees and shrubs include scattered individuals of red cedar (Juniperus virginiana), pitch pine (Pinus rigida), and bayberry (Myrica pensylvanica).

A small patch, sedge-dominated fen community that occurs at the upper edge of salt marsh complexes just above sea level where there is adjoining freshwater seepage. Although its association with salt marshes is diagnostic, it is only infrequently influenced by salt or brackish overwash during unusually high tides. This natural community is dominated by herbs, occasionally with some scattered shrubs or short trees.

Known examples of this community have been found at elevations between 1 feet and 6 feet.

The best time to see this natural community is during the summer when a large diversity of plants and animals can be found. 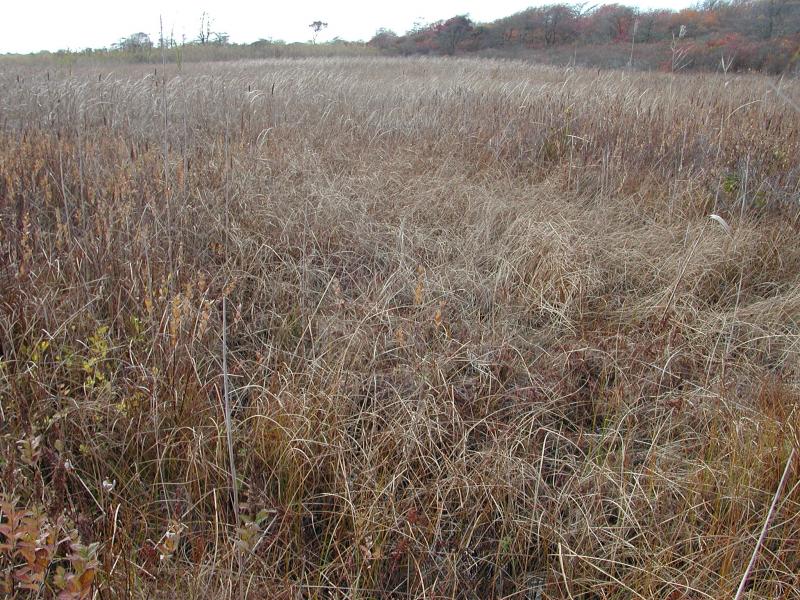 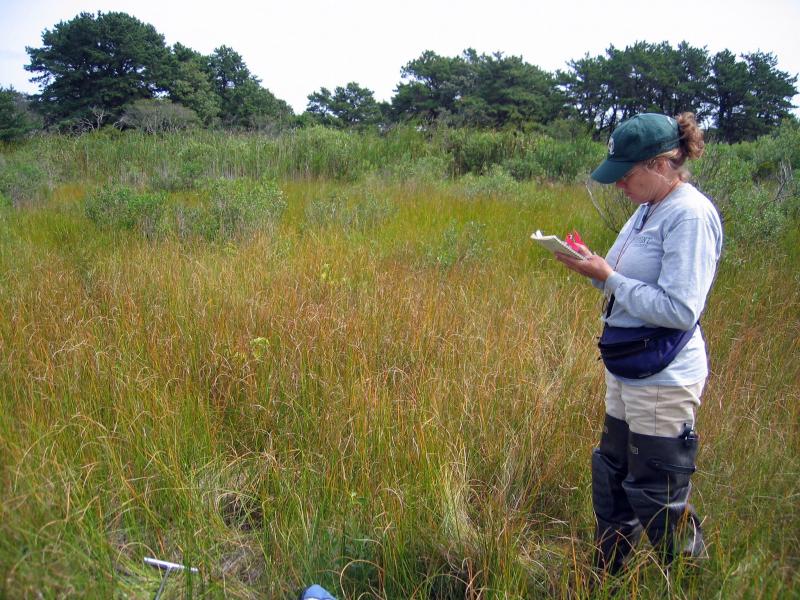 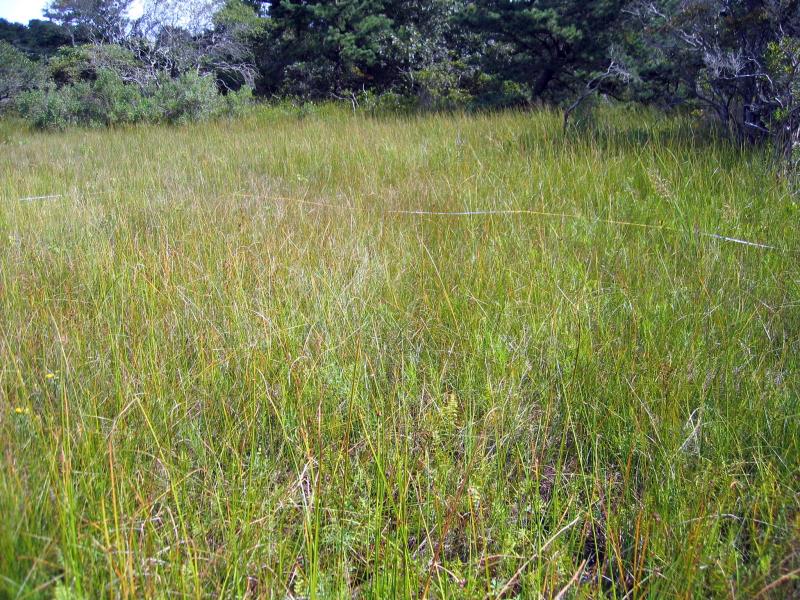 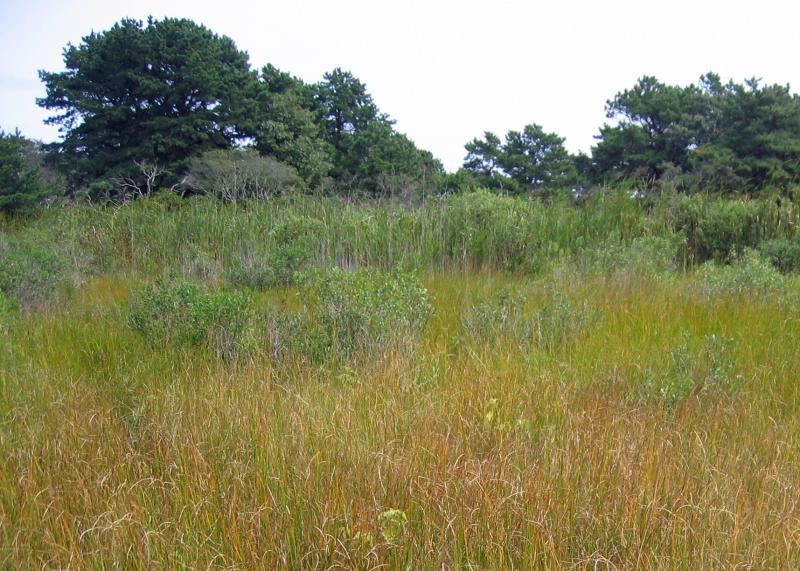 This figure helps visualize the structure and "look" or "feel" of a typical Sea Level Fen. Each bar represents the amount of "coverage" for all the species growing at that height. Because layers overlap (shrubs may grow under trees, for example), the shaded regions can add up to more than 100%.