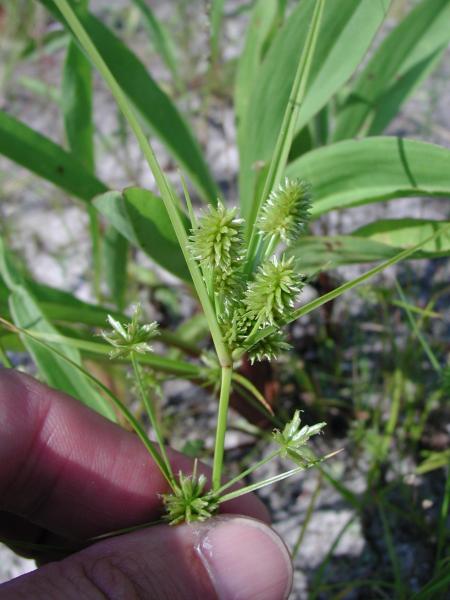 The species name means "turned backward or downward" and refers to the perigynia of the spikelets that face downward when mature (Fernald 1950). A collection on Jones Beach Island in 2003 was the first time it had been seen on the island since 1935.

None of the known populations have been rechecked so there is no information on short-term trends.

This plant has apparently always been rare as there have never been more than 20 known populations in the state. Its population numbers have declined over the long term as many of its sites in the New York City area have been destroyed.

Directed disturbance from the overuse of beaches and nearby swales and saltmarshes threatens this plant as does the invasion of Phragmites.

Beach and dune areas where it occurs should be protected from vehicle and human use. The Phragmites should be eliminated if it threatens populations.

Habitat preferences and reproduction success should be studied to understand how populations could be augmented at its present locations.

In New York this species has been collected from sandy coastal habitats including maritime dunes and the upper edges of a salt marsh. More information on the habitat requirements of this species in the state is needed (New York Natural Heritage Program 2010). Open woods and thickets in moist to dry, sandy soils (FNA 2002). Sandy barrens and coast (Gleason & Cronquist 1991).

This flatsedge is currently known from Queens and Suffolk counties. It was historically known from most of Long Island, Staten Island and Westchester County.

This flatsedge occurs along the Atlantic and Gulf coastal plain from Massachusetts and New York to Florida. It is also common inland from Virginia to Missouri and Oklahoma south to Texas.

Cyperus echinatus has similar 3-sided achenes and few-flowered, dense heads, but differs by having large pistillate scales (lowest scale 3.5 to 4.3 mm versus 2 to 2.5 mm for C. retrorsus) and rounder heads (C. retrorsus has ellipsoid heads) (Gleason and Cronquist 1991).

The time of year you would expect to find Retrorse Flatsedge fruiting in New York.