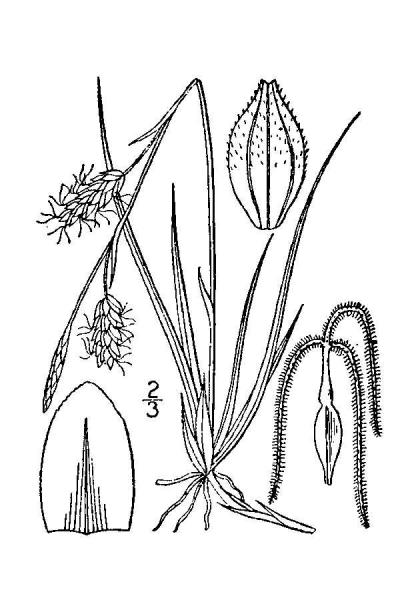 State Conservation Status Rank
SX
Presumed Extirpated from New York - No existing locations known anywhere in New York despite intensive searches of historical locations and other appropriate habitat, and virtually no likelihood of rediscovery.
Global Conservation Status Rank
G5
Secure globally - Common in the world; widespread and abundant (but may be rare in some parts of its range).

Carex richardsonii is named in honor of its discoverer, Sir John Richardson who was alive from 1787 to 1863 (Fernald 1970).

There is only a single specimen of Carex richardsonii from New York. This was collected in the late 1800 from a site "eleven miles west of Rochester in the town of Greece." Despite multiple surveys, this site has not been relocated. While the only known site is probably extirpated, this sedge may be present in the alvar region near the eastern shore of Lake Ontario.

No populations of Carex richardsonii have been seen in NY in over 100 years and therefore, short term trends are unknown.

The one population that was known from Monroe County in the late 1800's has not been relocated. If it is still extant, it may be threatened by residential development although the current thinking is that this population has already been extirpated.

This species should be sought in the alvar regions near the eastern end of Lake Ontario. Additionally, during any surveys that are conducted along the postglacial shoreline of Lake Iroquois, south of Lake Ontario, investigators should look for Carex richardsonii.

There is no specific habitat information from the one or perhaps two historical NY populations of C. richardsonii (New York Natural Heritage Program 2006). Carex richardsonii occurs in vernally moist (often drying later in the season) open woodlands, alvars, floodplain edges, prairies, and basic and acidic outcrops. In the east, it is known from alvars, tall-grass prairies, and postglacial shorelines, such as those along Lake Iroquois (in Ontario and New York) (Crins 2002). It occurs in serpentine barrens in Pennsylvania (Rhoads and Block 2000). Dry or rocky upland woods (Gleason and Cronquist 1991). The habitat of the historical Monroe County, New York population, has been described as "dry woods" (Beckwith and Macauley 1894).

Carex richardsonii has only been documented from a single population in Monroe County although, there is one other historical collection from New York without locality information. The exact location of the Monroe County population is unknown but was documented in the late 18 hundreds as being a little west of Rochester in the town of Greece. Survey work in this region has not located the population and it is believed extirpated.

Carex richardsonii occurs from British Columbia and the Northwest Territories east to Quebec, southwestern Vermont, New York, and Pennsylvania south to Maryland, Ohio, Illinois, South Dakota, and Wyoming. It is common in the Canadian praires and is rare in the east (Fernald 1970, Crins 2002).

Carex richardsonii is a grass-like perennial. It grows in small loose tufts and occurs in patches. The leaves are strap-like and 0.9-3.3 mm wide. The base of the plants are dark purplish to reddish brown. Arising from the leaves at the base of the plants are stems 14-32 cm tall. Secondary stems branch off of the main stems and have clusters of female flowers/fruits at their summits. The main stems terminate in a cluster of male flowers. The fruits (perigynia) are 2.4-2.9 mm long and hairy (Crins 2002).

Carex richardsonii is long rhizomatous. The leaf blades are 0.9-3.3 mm wide and the basal ones have dark purplish to reddish brown sheaths. It has culms 14-32 cm long with 2-4 pistillate lateral spikes and 1 terminal staminate spike. The proximal pistillate spikes have peduncles to 7 cm and are subtended by purple or brown long sheathing bracts. Pistillate scales are reddish brown. Perigynia are 2.4-2.9 mm long, beaked, and pubescent (Fernald 1970, Crins 2002).

This sedge is known to flower and fruit for a very short period of time (Voss 1972). Unlike many other Carex species, the distinctive purple or brown bract sheathes make this sedge conspicuous while it is in flower and early fruit.

Carex richardsonii is clearly distinct from all other Carex species that occur in New York. The long sheathing purple to brown proximal bracts are distinctive. Carex pedunculata is perhaps the most closely related species in New York. It differs in having some spikes on peduncles which arise near the base of the culms, glabrous perigynia, and densely tufted habit vs. all peduncles arising well above the base of the culms, pubescent perigynia, and loosely tufted habit for C. richardsonii. Some members of Carex section Acrocystis may also appear superficially similar. Species in Carex section Acrocystis have bracts which subtend non-basal spikes (spikes which do not arise near the base of the culms) sheathless or subsheathing vs. long sheathing for C. richardsonii.

Carex richardsonii has a very short flowering / fruiting period which is between mid-May till late-June. The culms are short lived. Therefore, the best time to survey for this species is from late May till mid June.

The time of year you would expect to find Richardson's Sedge fruiting in New York.

Carex richardsonii is in section Clandestinae which includes the common C. pedunculata but, C. pedunculata may actually belong in a different section (Crins 2002).

Beckwith, Florence and Mary Macauley. 1894. Plants of Monroe County and adjacent territory. Proceedings of the Rochester Academy of Science Vol. 3:1-149.