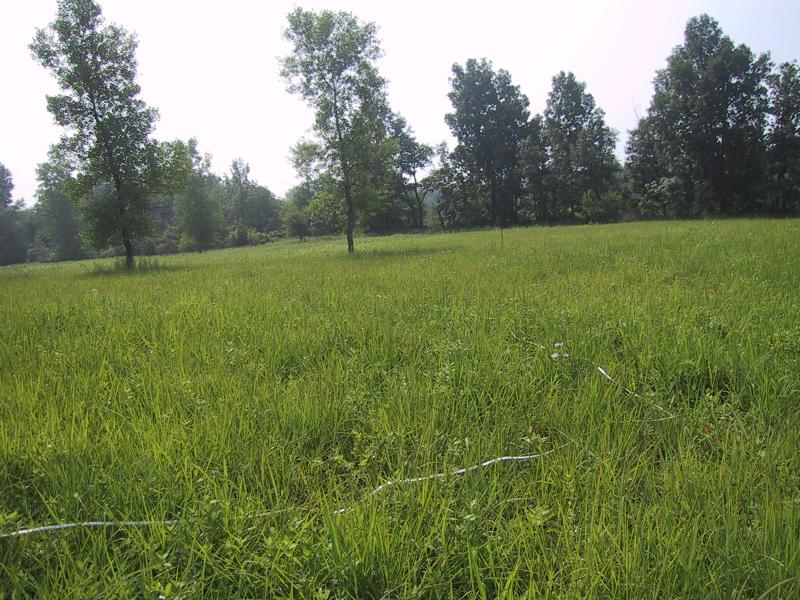 Oak openings, or grass-savanna openings within oak-hickory matrix forests, were never very common in New York. Far more common in the midwestern United States, this community type has declined dramatically throughout its range due to a combination of fire suppression, land development, and competition by invasive species. Widespread fire suppression has led to the succession of nearly all oak openings to mature forest. Historically, oak openings were created through the dynamics of natural fire disturbance; as openings succeeded to woody vegetation, regular fires in the landscape prevented canopy closure and dominance by woody vegetation.

This community has been degraded or destroyed throughout its range. New York State is at the edge of the range of the community. There are less than five occurrences statewide, and probably not many more historically given that its range is primarily restricted to the Monroe County portion of the Eastern Ontario Till Plain. Although two documented occurrences have good viability, there are no high quality examples known in the state (i.e., no A- to AB-ranked occurrences). Only two oak openings are protected on public land or private conservation land. The current trend of this community is declining moderately as a result of invasive species, development, and recreational overuse.

The number and acreage of oak openings in New York have declined in recent decades as a result of displacement by development and the spread of invasive species. At least two occurrences first documented in the mid-1980s have been lost. This loss has been offset somewhat by restoration efforts at Rush Oak Openings.

The number and acreage of oak openings in New York have probably declined moderately from historical numbers as a result of fire suppression, conversion to agriculture, and other development. Oak openings were probably always few in number and small in size in New York.

Invasive plants are the primary threat to all oak openings in New York. Various species of black swallow-wort (Cynanchum spp.) are having an alarming impact. Other invasive species include shrubby honeysuckle (Lonicera morrowii) and various pasture weeds. Suppression of the natural fire regime is the second greatest threat to this community. Oak openings are also threatened by development (e.g., residential, agricultural, roads, etc.) and recreational overuse (e.g., ATVs, mountain bikers, and hikers). Logging and trash dumping are considered minor threats to a few examples of this community.

Soils are very thin in and around this community, and the effects of clearing and construction on soil retention and erosion must be considered during any development activities. Similarly, these soils are acidic and nutrient-poor, and any soil enrichment (e.g., septic leach fields, fertilized lawns, etc.) activities have a high probability of altering community structure and function. The open structure of this community is maintained by fire and presents a fire hazard to existing and proposed development. Unprotected structures located within or near this community are more susceptible to damage from fire.

This community is currently known from the Erie and Ontario Lake Plain with most sites occurring within the Monroe County portion of the Eastern Ontario Till Plain. The historical range was probably restricted to the same area, and probably extended east into Wayne and Ontario counties, south into Livingston County, and west to Niagara and Erie counties.

Oak openings are grass-oak savanna communities that occur on well-drained soils. In New York, these savannas originally occurred as openings within extensive oak-hickory forests. Historically they were restricted to exessively well-drained sites such as on knobs or hilltops with shallow soil over dolomite outrcrops, sandy to gravelly soils of kames and eskers, or gravelly glacial deltas and terraces. The best remnants can be found on dolomite knobs. Characteristic trees include Chinquapin oak (Quercus muehlenbergii), white oak (Q. alba), and black oak (Q. velutina). The oaks occur as open-grown trees with broadly spreading canopies and are sparsely distrubuted across a graminoid groundlayer dominated by warm-season grasses.

Known examples of this community have been found at elevations between 410 feet and 705 feet.

The best time to experience oak openings is during the summer months, from June to August, when a variety of wildflowers, insects, and birds can be seen in and around the openings. The bright orange flower of butterfly milkweed (Asclepias tuberosa) is attractive to monarch butterflies, hummingbirds, and a number of other insects. Eastern bluebirds nest in cavity trees around the openings and the largest openings are used by a number of other openland bird species including savanna sparrow, eastern meadowlark, American kestral, and brown thrasher. 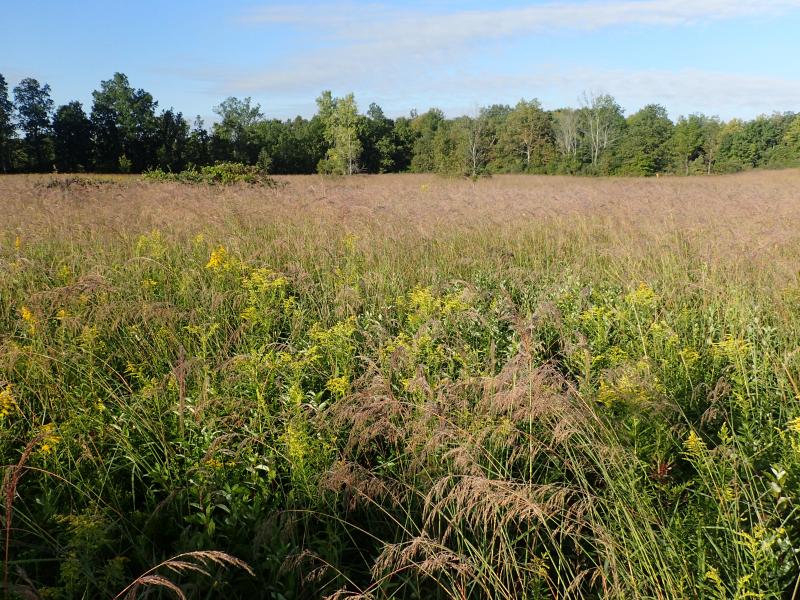 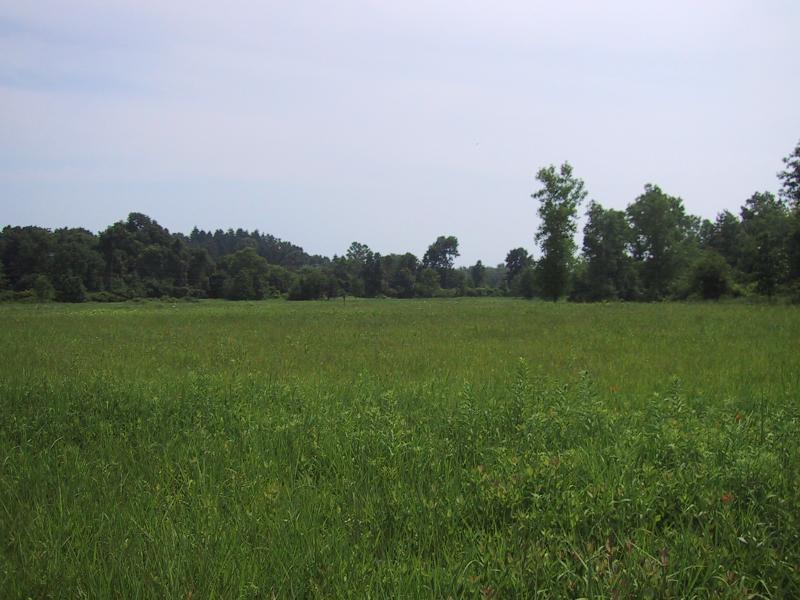 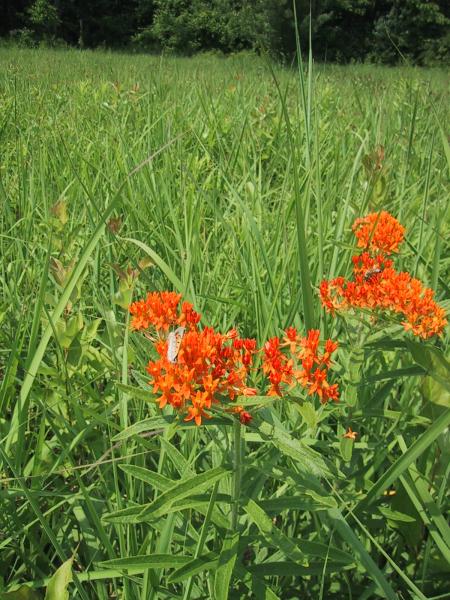 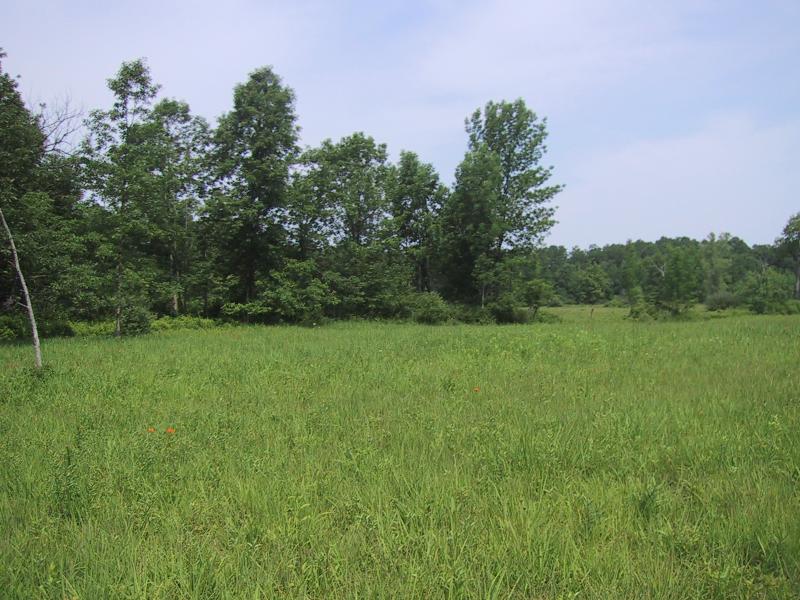 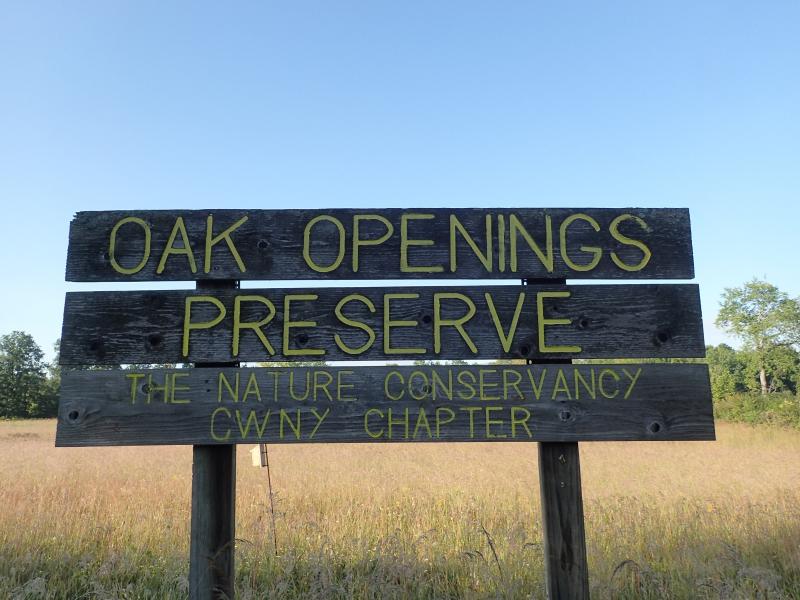 This figure helps visualize the structure and "look" or "feel" of a typical Oak Openings. Each bar represents the amount of "coverage" for all the species growing at that height. Because layers overlap (shrubs may grow under trees, for example), the shaded regions can add up to more than 100%.

This guide was authored by: D.J. Evans