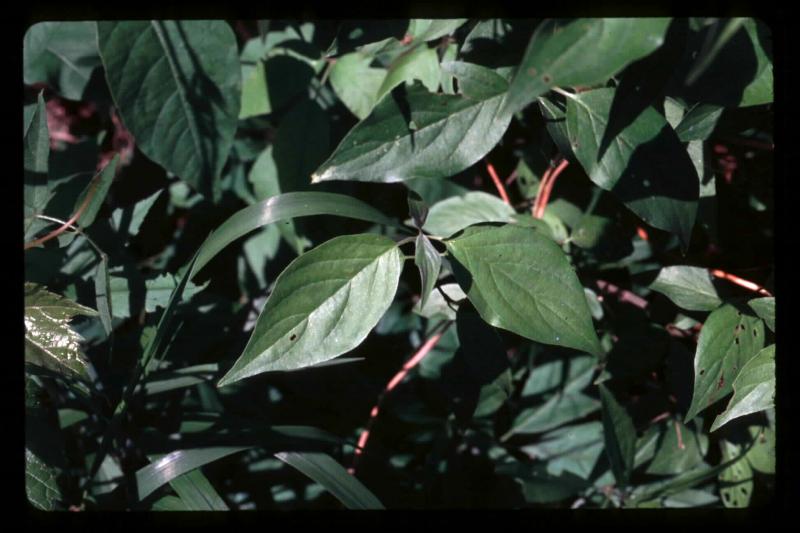 Rough-leaved dogwood is popular in the horticulture trade where an understory tree or shrub is needed for areas where other flowering trees may not do well because of dry or poor soil. Its habit of producing a dense clone provides cover for birds who are also attracted by its white, juicy fruits. The species is named for Thomas Drummond (1790-1835), a Scottish naturalist and plant explorer who made many plant collections in the United States from 1825-1835.

Currently there are only three known populations in the watershed of Cattaraugus Creek but trends are stable and threats are low. Only one populations is large. Three historical populations have been recorded in the same watershed so this species has always been rare within New York and will likely continue as just a few populations near the state's western border.

Only one of the three populations has been resurveyed and the plants are still doing well. The largest population has many plants and is not expected to decline. The trend of the other small population is unknown.

The long-term trend is predicted to remain stable since the large landscapes where these plants occur are not expected to change dramatically. There are only a few historical records so this plant will always remain rare in the state.

The largest threat to these occurrences would be severe and prolonged flooding of their habitat but it is not expected that this threat would happen very often. The areas where the plants occur are not expected to be developed. Overall, the threats to this plant are very low.

The hydrologic régimes where these plants occur need to be protected. The forested areas along the rivers and streams need to remain intact.

A shrub that can be found in bottomland thickets, gravelly creek banks, floodplains, low-lying islands within river systems, and seepage areas on slopes and at the bases of slopes (New York Natural Heritage Program 2006). Wet woods and stream banks (Gleason & Cronquist 1991). Banks and thickets, especially along river and borders and borders of woods (Voss 1985). In sandy or clayey soils, along the margins of woods, or near shores of lakes and streams (Soper 1982). Shores and damp woods and thickets (Fernald 1970).

Most of our known populations are associated with river gorges draining into Lake Erie. It is also known from Goat Island on the Niagara River, but this population is reportedly planted.

This shrub ranges from western New York and Ontario west to South Dakota, and southward to Georgia and eastern Texas.

Rough-leaf dogwood is a clonal thicket-forming shrub that grows three to 20 feet tall. The olive to pinkish-brown twigs are rough to the touch. The leaves are 2-3 inches long, opposite, egg-shaped to elliptical in shape with a long narrow tip. They are distinctly rough to the touch on the upper surface with whiter undersides. There are 4-5 veins that arise on the lower half of each side of the mid-vein. In May or June the small white flowers bloom together in flat or rounded clusters. Slender red fruit stalks support white rounded fruits that ripen in August through October.

This shrub has brownish to gray branches, with brown (rarely white) slender pith. The leaves are scabrous (rarely smooth) above and pilose-wooly beneath. The fruit is a white, berry-like drupe, 4-8 mm in diameter.

This dogwood can be identified in leaf but mature fruits are helpful. To allow other to verify the identification, please collect a specimen with leaves and branches, along with fruit or flowers in available. Also make a note on the general habit and habitat of the collected specimen.

Cornus rugosa stems are green and warty, pith is white, leaves have 6-8 lateral veins on each side, and the fruits are blue. Cornus sericea twigs are bright red, pith of two-year-old branches is white, and the stone is dark brown with yellow stripes.

The leaves emerge in May and flowers in June. Fruits develop in July and mature by early August. These may persist on the shrub until the first frost or until the birds have eaten all fruit. Ideally, field surveys are conducted in August and September when mature fruits are present. However, those familar with the plant could identify it from leave only.

The time of year you would expect to find Rough-leaved Dogwood vegetative, flowering, and fruiting in New York.