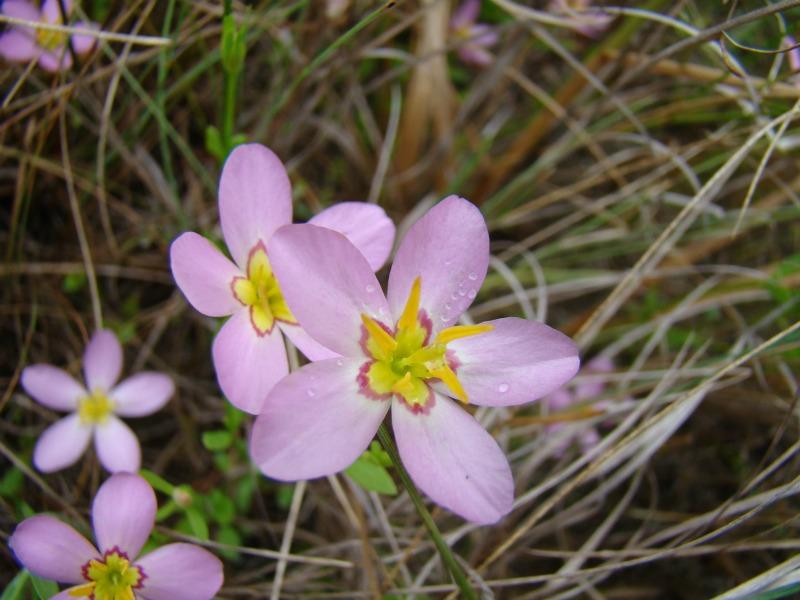 The species name means star and this beautiful wildflower is really the star of the salt marsh with its stunning pink and yellow flowers visible from midsummer into the fall.

There are seven existing populations with hundreds of plants each. Three of the populations are threatened by Phragmites. There are 17 historical populations known from the late 1800s through the 1970s which have not been rediscovered. Two other populations are now considered extirpated.

The short-term trends are not fully known. Three of the seven existing populations have been resurveyed and seem stable. More surveys for the remaining populations are needed to determine the trend.

The long-term trend is apparantly negative. Most of the historical collections of this species are from New York City and western Long Island, where much of the salt marsh habitat has been destroyed or severely impacted. This species has likely declined over the last century, although additional surveys of historical sites are needed.

Invasion of salt marshes or brackish meadows by European common reed (Phragmites australis ssp. australis) is a threat to some populations. Ditching and other human impacts to hydrology or water quality are threats at some sites as well. The impact of sea-level rise on high salt marsh communities and their constituent rare species (including Sea-pink) is a potential threat.

Control Phragmites invasions in the salt marshes that support this species and prevent any new incursions. Natural buffers should be established around the salt marshes to decrease pollution runoff and other direct human disturbances.

Research is needed to determine techniques for the successful augmentation of populations after Phragmites removal.

In New York, Sea Pink has been most often collected from areas of high salt marsh. It also can be found in wet, brackish habitats such as interdunal swales, brackish meadows, and ponds (New York Natural Heritage 2011). Salt or brackish marshes along the coast (Gleason and Cronquist 1991).

This saltmarsh wildflower is known from Nassau and Suffolk counties on Long Island but extirpated farther west in Queens and Brooklyn. There is also an historical record from Staten Island.

This saltmarsh wildflower grows along the Atlantic and Gulf coasts from Southern New England and New York, where it is rare, south to Florida and west to Louisiana.

Sea-pink is an annual herb in the gentian family. Its stem may be up to 60 centimeters tall, with opposite leaves. The middle leaves of the main stem are 2 to 4 centimeters long, entire and oblanceolate, and taper to the base. The upper leaves are linear and tapered to the base. The striking flowers are pink (sometimes white) with a yellow center, its petals are 9 to 18 millimeters long, exceeding the lobes of the calyx. The fruit are capsules. (Gleason and Cronquist 1991)

Sabatia stellaris is most similar to S. campanulata. S. campanulata differs by being a perennial species growing from a thick caudex, by having leaves with a broad, sessile base, by the calyx lobes equaling the corolla, and by the lateral peduncles having 1 or 2 bracts (S. stellaris has bractless peduncles). (Enser 2004, Gleason and Cronquist 1991)

Sea-pink flowers in August and September and a few blooms may persist into October.

The time of year you would expect to find Sea Pink flowering and fruiting in New York. 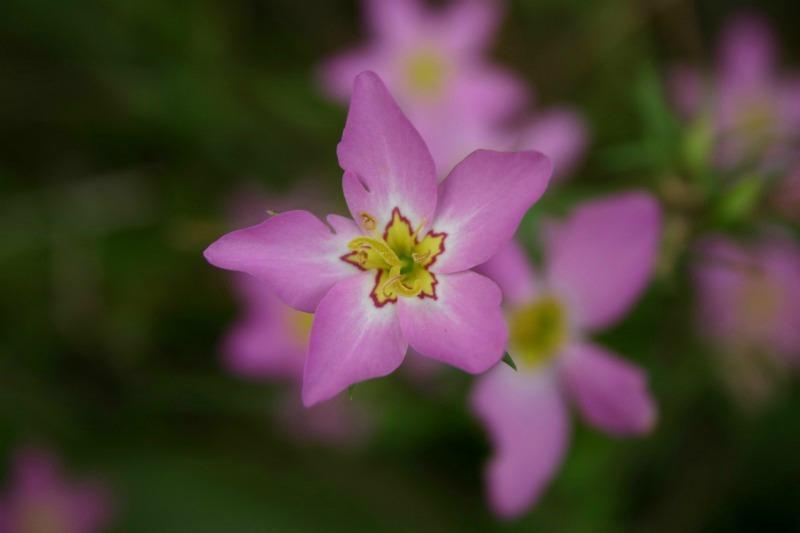 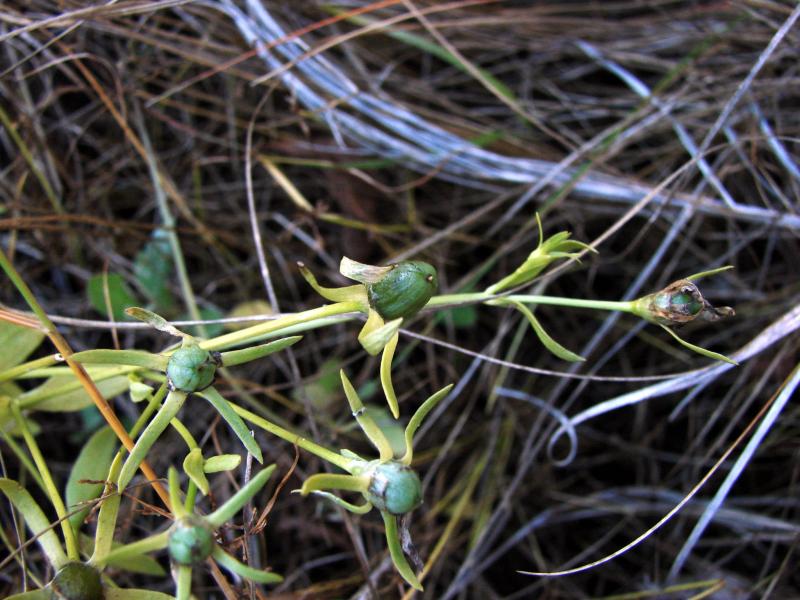 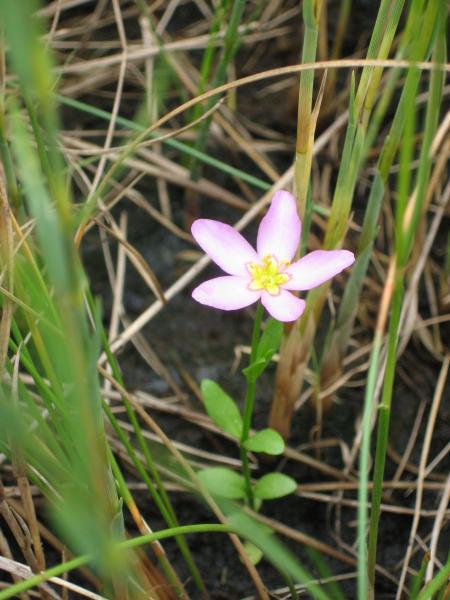 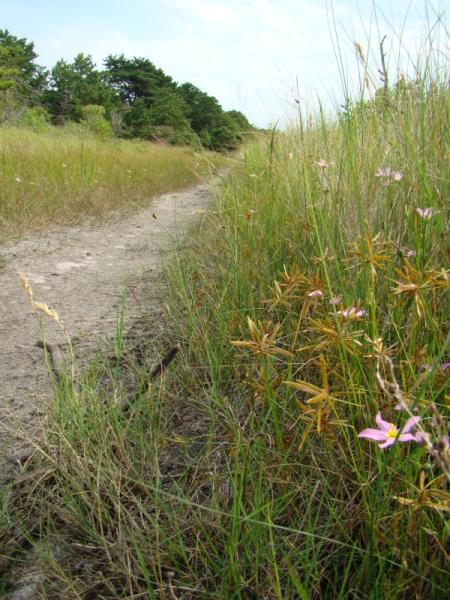 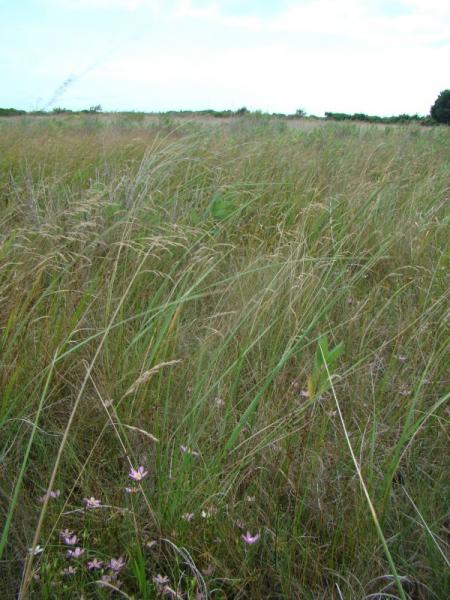