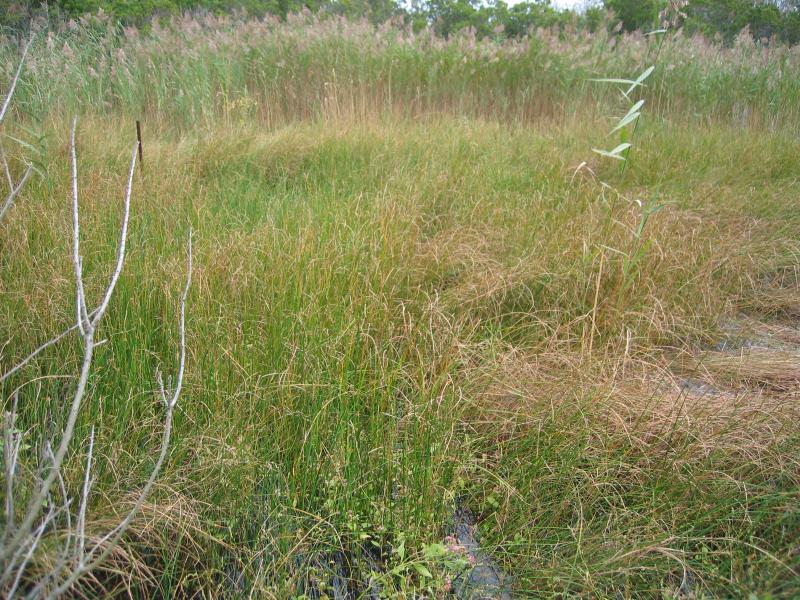 There are relatively few small, geographically restricted occurrences of this community. Although they are protected on public or private conservation land, they are threatened by management practices that alter natural hydrologic processes (such as breach contingency plans) and invasive species, such as common reed (Phragmites australis). The surrounding landscape is vulnerable to exotic flora invasion and urban development.

Community viability/ecological integrity and area of occupancy is suspected to be slowly declining, primarily due to community conversion (from brackish interdunal swales to estuarine common reed marsh) after invasive species encroachment. Other factors in the decline include anthropogenic alterations (both physical and hydrological) to dune and swale dynamics and coastal development (e.g., filling, road construction, and community destruction).

The number, extent, and viability of brackish interdunal swales in New York are suspected to have declined substantially over the long-term. These declines are likely correlated with coastal development and associated changes in hydrology, water quality, and natural processes.

The main threat to brackish interdunal swales is invasion by common reed (Phragmites australis), which may rapidly expand to convert this community to an estuarine common reed marsh. Breach contingency plans for public lands that include dune stabilization and repair, overwash water drainage, and other hydrologic alterations threaten processes that create and maintain the community. Additional threats include groundwater pollution and filling during road construction and development.

Monitor the abundance of common reed (Phragmites australis) in this community and, as needed, control its encroachment. Maintain dynamic beach and dune processes, including allowing dunes to be breached and overwashed by storm events. Minimize breach closure, groundwater pollution, and road fill.

Searches for additional occurrences are needed, especially along the barrier islands of Long Island between Democrat Point and Southampton Beach. Fire Island East and Fire Island Wilderness should be surveyed first. Other leads include Democrat Point, Westhampton Beach and Montauk Point. The biota at the Jones Beach Island sites need to be more accurately mapped and characterized.

Establish predictive models of dune dynamics to determine where additional patches of this community may arise spontaneously. Evaluate whether the strain of common reed (Phragmites australis) that is invading brackish interdunal swales is native.

Restricted to estuarine portions of the North Atlantic Coast, Chesapeake Bay Lowlands, and Mid-Atlantic Coastal Plain Ecoregions. It is documented from Maryland, Delaware, New Jersey, New York, Massachusetts, and New Hampshire (NatureServe 2009). It likely occurs in other states and may range south to North Carolina and north to Maine. Occurrences south of northeastern North Carolina may be related but likely have substantial floristic differences.

A brackish marsh community in interdunal swales that are infrequently flooded by unusually high tides. Ths community is dominated by halophytic graminoids. Individual swales occur as small patches positioned between fore-, primary, and secondary dunes in a maritime dunes system, typically on barrier islands. Swales experience dynamic fluctuations in water levels and salinity. Water levels are highest after infrequent and sporadic overwash. This occurs during spring tides, full moons, or major storms when waves overtop the highest part of the dunes. Water and suspended sand are then transported through the foredune into low-lying areas within the dune system. Flood frequency can vary from several times per year to as little as once every 25 years, forming temporary ponds. During the driest times, ponds evaporate, surface sands are no longer saturated, salt concentrates and then enters the groundwater, and salt deposits form on the surface. Salinity is typically mixohaline, with water being derived from a mix of saline ocean overwash and freshwater groundwater lens. However, salinity can vary greatly at certain times of the year from oligohaline (0 ppt) to supersaline (70 ppt) in response to the salinity of the groundwater and accumulation of salt during evaporation. Soils are deep sands that often become anaerobic but lack peat accumulation. The surface is often rusty colored from a coating of blue-green algae. Community variants include semi-permanent pools, long-lived wet swales with perennial graminoids, and newly-formed sparsely-vegetated damp swales with early successional annual forbs. Occurrences of this community are sometimes ephemeral, representing the early stages of salt marsh or coastal salt pond formation or rapidly transforming into common reed marshes. Brackish interdunal swales were previously included in coastal salt pond (Reschke 1990).

Known examples of this community have been found at elevations between 3 feet and 10 feet.

The grasses, sedges, and rushes that characterize the flora of this community bloom in mid- to late summer. Some of the showy associated species (saltmarsh fleabane, saltmarsh aster, and rose-mallow) should also be flowering at that time, presenting a palette of pale pinks to deep purple. 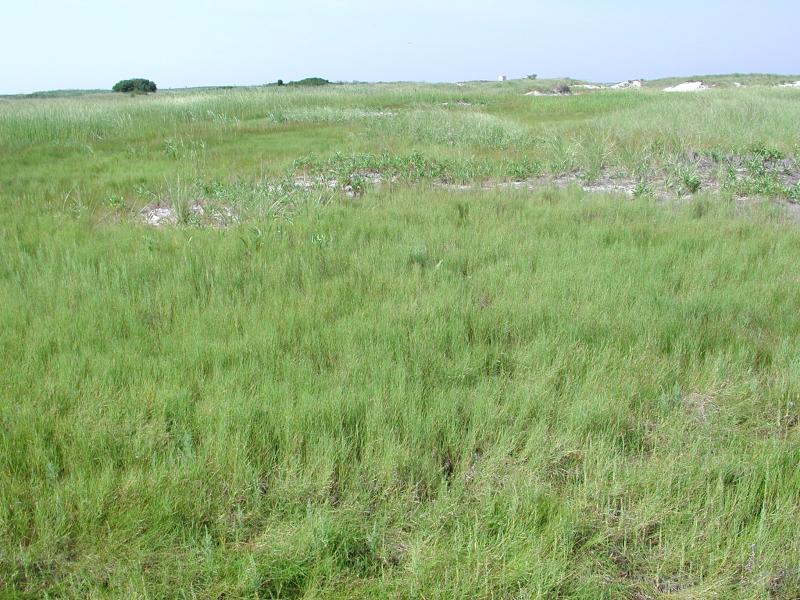 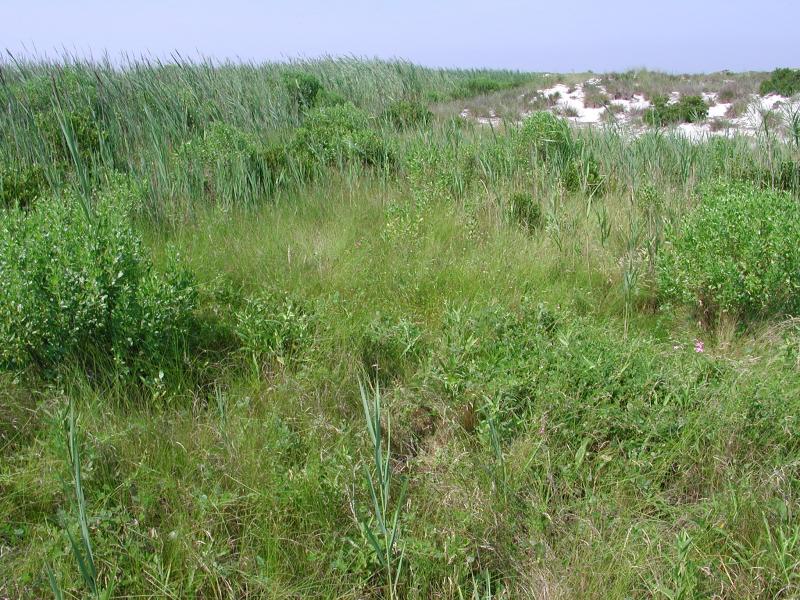 This figure helps visualize the structure and "look" or "feel" of a typical Brackish Interdunal Swales. Each bar represents the amount of "coverage" for all the species growing at that height. Because layers overlap (shrubs may grow under trees, for example), the shaded regions can add up to more than 100%.