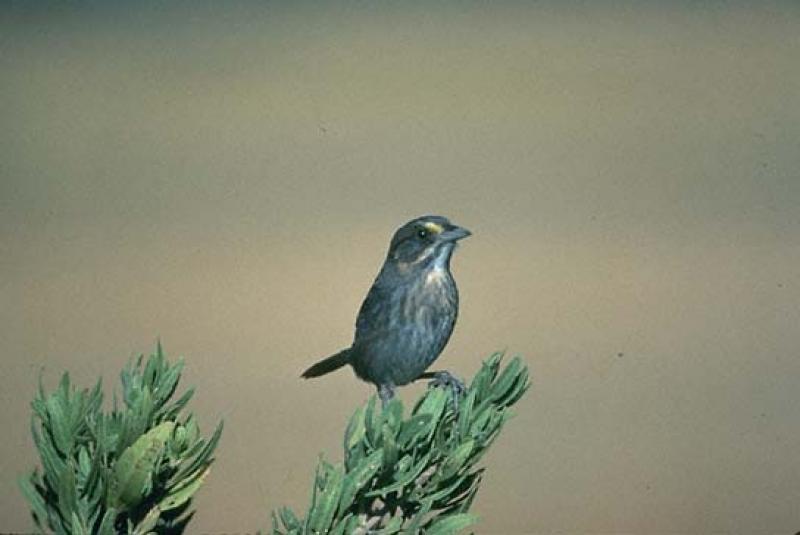 State Conservation Status Rank
S2S3B
Imperiled or Vulnerable in New York - Very vulnerable, or vulnerable, to disappearing from New York, due to rarity or other factors; typically 6 to 80 populations or locations in New York, few individuals, restricted range, few remaining acres (or miles of stream), and/or recent and widespread declines. More information is needed to assign either S2 or S3. (A migratory animal which occurs in New York only during the breeding season.)
Global Conservation Status Rank
G4
Apparently Secure globally - Uncommon in the world but not rare; usually widespread, but may be rare in some parts of its range; possibly some cause for long-term concern due to declines or other factors.

The Seaside Sparrow is a habitat specialist occupying a narrow band of coastal salt marsh habitat.

This species is restricted to coastal salt and brackish marshes (Post and Greenlaw 1994). Habitat alteration is historically reason for decline and currently a potential threat. Coastal development practices, such as ditching and filling of salt marshes, negatively impact this species since ditched wetlands provide lower quality habitat and are used infrequently (Post and Greenlaw 1994). The New York Breeding Bird Atlas documented a decline in the number of probable and confirmed atlas blocks from 46 in the first atlas (1980-1985) to 30 in the second (2000-2005) (McGowan and Corwin 2008).

The Seaside Sparrow is locally common along the barrier islands off the south shore of Long Island. It had been extirpated from Staten Island and the lower Hudson River in Westchester County by the 1940's, but was rediscovered in both of these locations in the 1990's. Recently, numbers have shown a decline in New York. (Levine 1998)

A historical account by Giraud in 1844 described Seaside Sparrows as common to abundant in south shore bays and on north shore necks of land on Long Island. Although numbers have likely declined, there has been little change to the known historical range except for gaps in distribution largely due to human devlopment along the coast (Post and Greenlaw 1994). The range has slighlty expanded in the northeast from Massachusetts into New Hampshire (Post and Greenlaw 1994).

The major threat is ditching and filling of wetlands in conjunction with costal development. Drying of wetlands from mosquito ditching and wetland impoundment has also been a threat. Natural succession over time of low marsh habitat into high marsh is a potential threat because high marsh generally provides lower quality habitat. Since this species occupies a narrow coastal range, populations may be displaced or impacted by major storms, fires, and oil spills. Flooding can destroy nests and young, diminishing productivity for a season as well as displacing individuals. Climatic change is a potential threat for this species especially in the southern part of the range where salt mash habitat may be lost to invasive mangroves as the climate warms. (Post and Greenlaw 1994)

The major management concern is protection of estuarine wetlands from development, ditching, and from invasive plants.

The Seaside Sparrow has been well-studied in New York and the northeast (Merriam 1979, Post and Greenlaw 1994). This species is monogamous for the breeding season, however, since it often feeds outside the nesting territory research into potential extra-pair copulations, or breeding events with other patners is needed.

In New York, the Seaside Sparrow is almost entirely restricted to salt marsh areas on the south shore of Long Island where it occurs from Southampton west to Jamaica Bay. Within this region the center of abundance is in the bays of Nassau and western Suffolk Counties. Outlying colonies occur on Gardiner's and Fisher's islands and two small marshes on the north shore of Nassau County. Seaside Sparrows occur at a single site in Westchester County on the Long Island Sound and formerly occurred at a single brackish marsh at the southern end of the Hudson River (Greenlaw 1992, Andrle and Carroll 1988). There are a small number of birds reported annually in winter counts on Long Island (Levine 1998). It is unknown where birds breeding in New York spend the winter (Levine 1998).

The Seaside Sparrow breeds from Massachusetts south along the Atlantic Coast to the St. Johns River in northcentral Florida, and from Tampa Bay on the Gulf Coast of Florida to Corpus Christi, Texas (AOU 1983). Breeding birds have been noted in recent years in New Hampshire, but it is unlikely that populations can become established much further north since the physiography of tidal marshes changes and they become unsuitable in southern Maine (Greenlaw 1992). Throughout its range, Seaside Sparrow populations are separated into demes by areas of unsuitable habitat. A number of subspecies have been described and at least two of these are now extinct. Human habitat alterations have caused many additional gaps in the breeding distribution of this species. The winter range is similar to the breeding range although most northeastern (New Hampshire to New Jersey) breeding birds are migratory and probably winter primarily in the southeastern United States. In addition, wintering birds occur in coastal Florida and the southeast coast of Texas, to the south of current breeding populations (Post and Greenlaw 1994).

The Seaside Sparrow is a grayish-olive sparrow with dullish breast streaking, yellow spot behind the eye, and long (for a sparrow) spike-like bill.

Both sexes look alike and subspecies in the gulf coast and Florida differ in color from populations in the northeast. Characteristics of northeastern birds are a yellow wrist, overall grayish-olive color, yellow supraloral spot (between eye and bill), no wing bars, dark moustache stripe (extends down from bill), buffy malar stripe (extends down from bill near throat), white throat, and stripped breast, sides and flanks (Post and Greenlaw 1994). The primary song resembles a Red-winged Blackbird but is more buzzy and includes a series of trills and a terminal buzz (National Geographic 1999, Post and Greenlaw 1994). Nests are described as a "simple open cup of grass stems and blades lined with finer grasses" (Post and Greenlaw 1994).

Look for the distinct yellow supraloral spot between the eye and the bill and also the dark moustache stripe that extends down from the bill and the buffy malar stripe under it. Also useful are the overall greyish-olive color, breast streaking, as well as the bill shape.

Feeding tends to occur in open areas with a mud substrate, also in ground litter, and at the bases of rooted grasses (Greenlaw 1983). Food is obtained by either climbing through vegetation or walking along the ground while gleaning and probing the mud with the bill (Post et al. 1983). They may also feed along the edges of pools and ditches. Seaside Sparrows eat mostly insects and spiders during the breeding season including insect larva and spider egg cases. Dipterans or flies were documented as an imporant food source in New York as well as some moth species (Merriam 1979). In the fall birds consume a much higher component of seeds in their diet (Post and Greenlaw 1994).

Look for this species in coastal salt marshes in the spring and summer. The first spring arrivals in New York are April 21-26 and fall migration occurs from the end of August through October. There are regular but small numbers of winter birds reported. (Levine 1998, Post and Greenlaw 1994)

The time of year you would expect to find Seaside Sparrow active and reproducing in New York.

Post, W., J.S. Greenlaw, T.L. Merriam and L.A. Wood. 1983. Comparative ecology of northern and southern populations of the seaside sparrow. pp 123-136. In: The seaside sparrow, its biology and management.