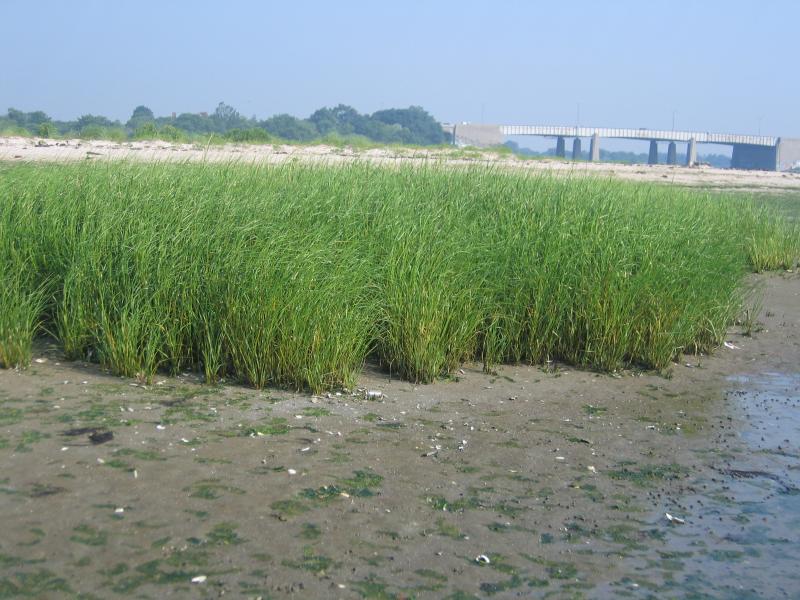 The ribbed mussel (Geukensia demissa) is a common sight in low salt marshes; in Jamaica Bay marshes they can be found in clusters as dense as 10,000 mussels per square meter! This species can be distinguished from other mussels by the parallel grooves on their shells, which form annually and can be counted to determine the mussel's age. Ribbed mussels attach to the base of salt marsh cordgrass, to rocks in the muddy substrate, and to each other with silky 'byssus' protein threads that are secreted by a gland in the organism's foot. Individual mussels can live for more than 15 years and grow to over 10 cm in length (Franz 2000).

There are an estimated 25 to 50 extant occurences statewide. The several documented occurrences have good viability and most are protected on public land or private conservation land. The community is restricted to sheltered areas of the seacoast in the the Coastal Lowlands and Manhattan Hills ecozones, and includes a few moderately sized, good quality examples. The current trend of the community is declining; the speed and severity of the decline varies by site. Substantial primary threats include ditching and draining, dredging and filling, shoreline hardening, poor water quality, diking and impoundment, inlet stabilization, altered sediment budget, slumping and subsidence, changes in water circulation patterns, sea level rise, restricted tidal connection, and altered tidal hydrodynamics.

Over the last several decades, there have been significant decreases in the area of extent, number, and ecological integrity of low salt marshes in New York. Several studies have reported significant losses of tidal wetlands in Jamaica Bay. From GNRA and JBWPPAC 2007: Tidal wetlands in Jamaica Bay are continuing to decrease at an accelerated rate. From 1951-1989, average marsh loss was 18 acres per year. From 1989-2003, average rate of loss was 33 acres per year. The Bay's marsh islands are projected to disappear between 2012 and 2024. From New York State Department of Environmental Conservation 2009b: "Between 1857-1924, intertidal marsh islands varied in size without trend, with average changes of up to 10 acres per year. During periods of significant storms, there were losses of marsh islands, but during quiescent years, the marsh islands were able to rebuild. From 1924-1974, 780 acres of marsh islands were lost due to direct dredging and filling (which were unregulated activities [until] 1974) and 510 acres were lost due to other reasons. Since 1974, the study shows that the rate of loss of intertidal marsh islands is accelerating. Between 1974-1994, 527 acres were lost at an average rate of 26 acres per year. From 1994-1990, 220 acres were lost at an average rate of 44 acres per year." Low salt marsh acreage is also decreasing in 14 targeted wetlands on the north and south shores of Long Island and in the Peconic Bay. A trends analysis showed that the losses were significant in 13 of the 14 wetlands (New York State Department of Environmental Conservation 2009c). Low salt marsh acreage has increased between 1974 and 1998 in Shinnecock Bay (161 acres) and Moriches Bay (100 acres) as a result of "landward movement of the tidal wetlands boundary" (New York State Department of Environmental Conservation 2009a).

The number, aerial extent, and integrity of low salt marshes in New York are suspected to have declined substantially from their historical state. These declines are likely correlated with coastal development; dredging, ditching, and filling; and changes in hydrology, water quality, and natural processes.

Remove shoreline armoring to increase overland sediment input; improve water quality by reducing or eliminating sewer and stormwater discharge and pesticide application; restore tidal regime by removing culverts, dikes, and impoundments, plugging ditches, and replacing static flow restriction devices with those that are calibrated for local tidal hydrology. Restoration and monitoring protocols are available (Niedowski 2000). Ensure connectivity between the open ocean, low salt marsh, and upland maritime dunes to allow species, such as the diamondback terrapin and the horseshoe crab, to freely move between habitats during nesting season.

Strive to minimize or eliminate hardened shorelines and maintain low-sloped shorelines within the tidal zone to increase overland sediment input. Maintain functional connectivity between the open ocean and bays with salt marsh complexes to enable full tidal flushing during each tidal cycle. For example, barriers such as railway causeways should have numerous culverts to allow sufficient hydrologic connectivity. If flow restriction devices are needed, those that are calibrated for local tidal hydrology can be used. Avoid dumping dredge spoil onto low salt marshes. This community is best protected as part of a large salt marsh complex. Protected areas should encompass the full mosaic of low salt marsh, high salt marsh, marine intertidal mudflats, saltwater tidal creek, salt panne, and salt shrub communities to allow dynamic ecological processes (sedimentation, erosion, tidal flushing, and nutrient cycling) to continue. Connectivity to brackish and freshwater tidal communities, upland beaches and dunes, and to shallow offshore communities should be maintained. Connectivity between these habitats is important not only for nutrient flow and seed dispersal, but also for animals that move between them seasonally. Development of site conservation plans that identify wetland threats and their sources and provide management and protection recommendations would ensure their long-term viability.

Continued research rangewide on causes of salt marsh decline and the synergism among them is needed. Continuing low salt marsh restoration and monitoring is needed. Future research of low salt marsh should include sampling of smaller marsh examples and investigating their connection with shallow water marine systems, such as marine eelgrass and algae beds. Eelgrass appears to play an important role in nutrient import and export, especially in the Great South Bay. In addition, there is a need for more study of the faunal diversity of nearby tidal creeks and near shore shallow zones in connection with the associated salt marshes. Strong regional differences are suspected (MacDonald and Edinger 2000).

Low salt marsh is restricted to sheltered areas of the seacoast in the the Coastal Lowlands and Manhattan Hills ecozones in Bronx, Westchester, Kings, Queens, Nassau, and Suffolk counties. It can be found across Long Island in north and south shore embayments and in the Peconic estuary at the eastern end of the island, as well as around New York City, in Westchester County on Long Island Sound, and in the Hudson River north to approximately the Tappan Zee Bridge (Niedowski 2000). It is well-developed in the south shore micro-tidal area and the small basins of the north shore meso-tidal area, where it is the dominant community type. It is also well-developed within the backbarrier fringe marshes and mid-lagoon marshes of Shinnecock Bay (MacDonald and Edinger 2000).

This community occurs along the Atlantic coastline from Nova Scotia and New Brunswick south to Cape Hatteras, North Carolina (NatureServe 2009).

A coastal marsh community that occurs in sheltered areas of the seacoast, in a zone extending from mean high tide down to mean sea level or to about 2 m (6 ft) below mean high tide. It is regularly flooded by semidiurnal tides. The mean tidal range of low salt marshes on Long Island is about 80 cm, and they often form in basins with a depth of 1.6 m or greater. The low salt marsh is one zone within a coastal salt marsh ecosystem; it occurs in a mosaic with several other communities. Low salt marsh grades into high salt marsh at slightly higher elevations, and into intertidal mudflats at slightly lower elevations. Saltwater tidal creeks that drain the salt marsh flow in a sinuous pattern through the marsh, with a narrow band of low marsh lining the banks of the saltwater tidal creeks. Shallow depressions, or pannes, may also occur in the low marsh.

By midsummer, these cordgrass meadows are in full bloom. The marsh can be explored on foot twice daily at low tide; this is the best time to examine the network of fibrous roots and peat that holds the marsh together, to observe associated invertebrate species such as ribbed mussels and the eastern mud snail, and to see shorebirds feeding on sea lettuce. 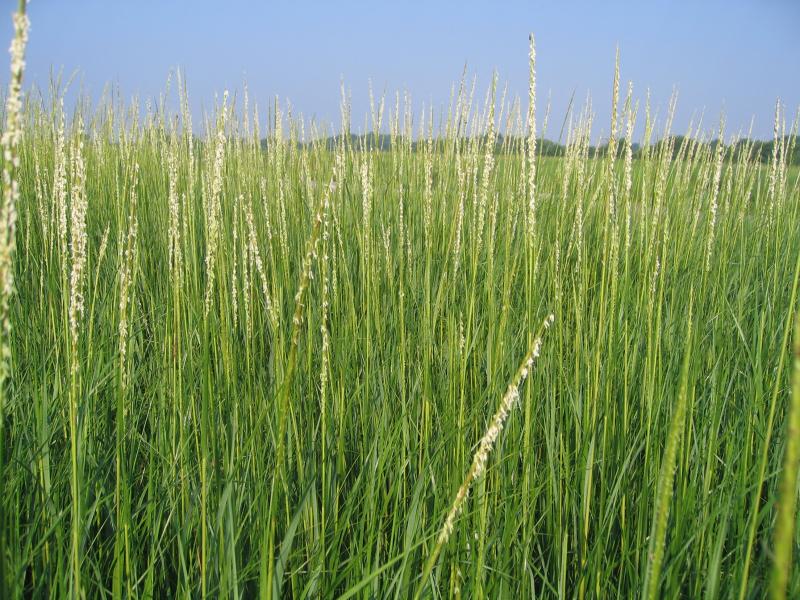 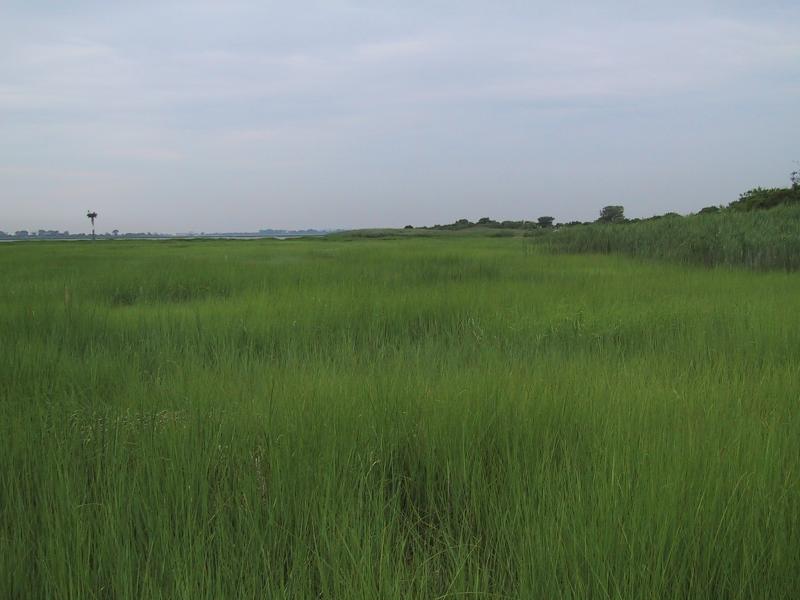 This figure helps visualize the structure and "look" or "feel" of a typical Low Salt Marsh. Each bar represents the amount of "coverage" for all the species growing at that height. Because layers overlap (shrubs may grow under trees, for example), the shaded regions can add up to more than 100%.

Information for this guide was last updated on: May 14, 2020