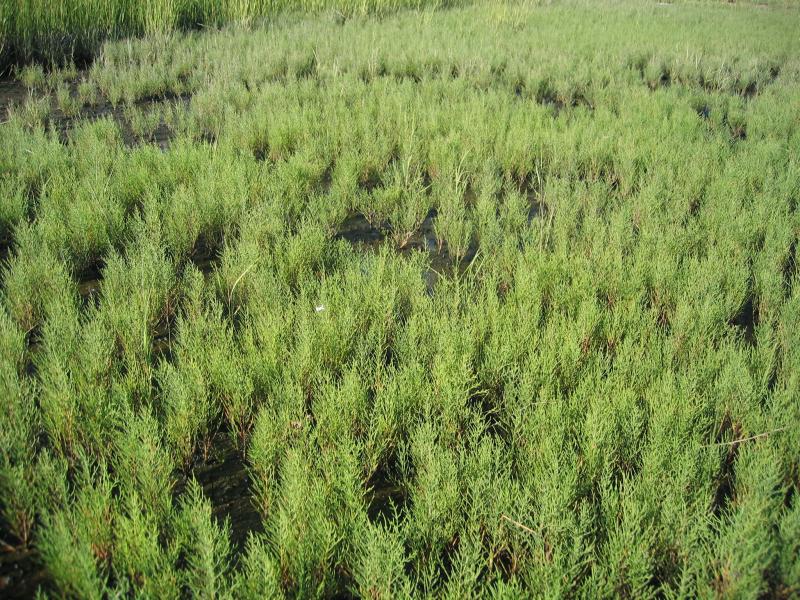 Salicornia (glasswort or sea asparagus), a characteristic succulent plant of salt pannes, is a culinary delicacy in some circles. It is a crisp, salty vegetable that can be eaten pickled, sauteed in olive oil, or raw in salicornia salad.

There are estimated to be between 10 and 25 occurrences of this community statewide. The several documented occurrences have good viability and are protected on public land or private conservation land. The community is restricted to salt marshes along the seacoast of the Coastal Lowlands ecozone, and is best developed on the south shore of Long Island, especially in areas of low mean tidal range. The current trend of the community is declining. Substantial primary threats, common to all salt marsh complexes, include ditching and draining, dredging and filling, common reed (Phragmites australis) invasion, poor water quality, diking and impoundment, inlet stabilization, shoreline hardening, wrack accumulation, altered sediment budget, subsidence, changes in water circulation patterns, restricted tidal connection, and altered tidal hydrodynamics.

In recent decades, the number, aerial extent, and quality of low and high salt marshes in New York has declined significantly. Salt pannes, which develop in these marshes, are suspected to have suffered equally drastic declines. It is speculated that these losses are linked to the public works projects of the 1930s, including dredging and filling for major airport construction and urban development. Declines have also been due to ditching for mosquito control; production of salt hay as a forage crop for livestock; and to pollution, including airborne particulates, pesticides, and sewage and stormwater discharge. It is suspected that losses will continue, resulting from ongoing shoreline development, declining water quality, and hydrologic alterations.

The number, aerial extent, and integrity of salt marshes and associated salt pannes in New York are suspected to have declined substantially from their historical state. These declines are likely correlated with coastal development; dredging, ditching, and filling; and changes in hydrology, water quality, and natural processes.

Strive to minimize or eliminate hardened shorelines and maintain low-sloped shorelines within the tidal zone to increase overland sediment input. Maintain functional connectivity between the open ocean and bays with salt marsh complexes to enable full tidal flushing during each tidal cycle. For example, barriers such as railway causeways should have numerous culverts to allow sufficient hydrologic connectivity. If flow restriction devices are needed, those that are calibrated for local tidal hydrology can be used. Avoid dumping dredge spoil onto salt pannes. This community is best protected as part of a large salt marsh complex. Protected areas should encompass the full mosaic of low salt marsh, high salt marsh, marine intertidal mudflats, saltwater tidal creek, salt panne, and salt shrub communities to allow dynamic ecological processes (sedimentation, erosion, tidal flushing, and nutrient cycling) to continue. Connectivity to brackish and freshwater tidal communities, upland beaches and dunes, and to shallow offshore communities should be maintained. Connectivity between these habitats is important not only for nutrient flow and seed dispersal, but also for animals that move between them seasonally. Development of site conservation plans that identify wetland threats and their sources and provide management and protection recommendations would ensure their long-term viability.

Additional inventory is needed on the north and south shore of Long Island and in Peconic Bay. Leads include sites that were not selected as reference wetlands by MacDonald and Edinger (2000). Sites on the north shore include Lloyd Neck Marsh and Flax Pond. The remaining south shore lead is at Apple Tree Neck Wetlands. Sites in the Peconic Bay are Bass Creek Marsh, Miss Annies Creek Marsh, Northwest Creek, and West Creek.

Future research on salt pannes should address the classification of the pond-like variant dominated by widgeon-grass (Ruppia maritima). A comparison of this community with coastal salt pond also needs to be made. Other research should investigate the role of salt pannes in organic matter decomposition and nutrient cycling to determine their rate of export and import of nutrients to the marsh surface. Additional beneficial research could explain the role of pannes in marsh surface formation (e.g., are they growing, shrinking, or fairly permanent features?) and more study is needed to understand the use of salt pannes by birds (e.g., what species use pannes and why?) (MacDonald and Edinger 2000).

This community occurs along the Mid- and North Atlantic Coast from the Canadian maritime provinces south to North Carolina (NatureServe 2009).

A shallow depression in a salt marsh where the marsh is poorly drained. Pannes occur in both low and high salt marshes. Pannes in low salt marshes usually lack vegetation, and the substrate is a soft, silty mud. Pannes in a high salt marsh are irregularly flooded by spring tides or flood tides, but the water does not drain into tidal creeks. After a panne has been flooded the standing water evaporates and salinity of the soil water is raised well above the salinity of sea-water. Soil water salinities fluctuate in response to tidal flooding and rainfall. Small pond holes occur in some pannes; the pond holes are usually deeper than the thickness of the living salt marsh turf, and the banks or "walls" of the pond holes are either vertical or they undercut the peat. Salt pannes can be formed by ponding of water on the marsh surface, scouring of wrack or coverage by storm wrack, and possibly by ice scour. Salt panne formation appears to be favored by a mean tidal range of about 20-80 cm and are poorly developed in settings with a mean tidal range greater than 1.6 m.

Salt marsh sand spurry, a small salt panne plant with white to bright pink petals, comes into flower in midsummer (July/August). Also at that time, salt-meadow grass in surrounding high salt marshes has become tall enough to develop the flattened, circular 'cowlick' growth form that is characteristic of that community. This species also blooms in midsummer, and its large florets provide a great opportunity to examine the unique structure of graminoid flowers. 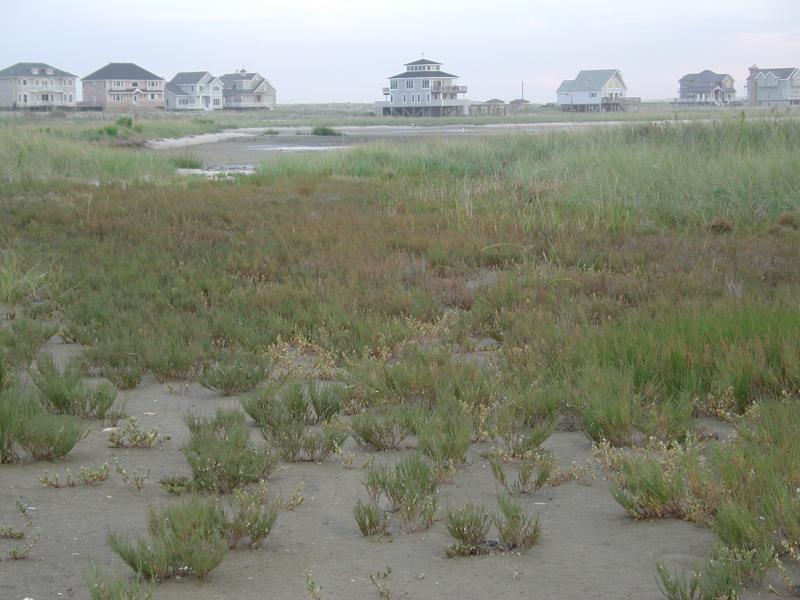 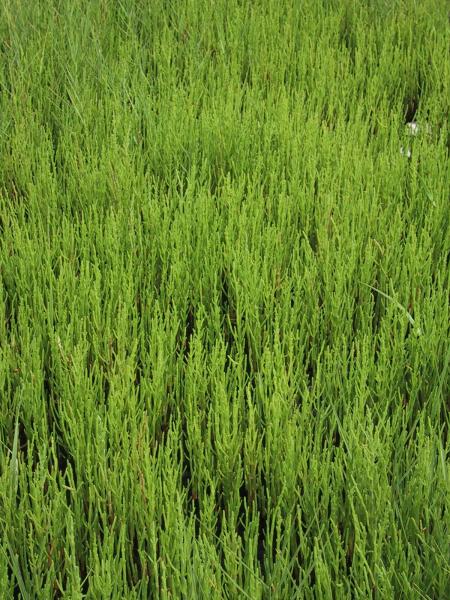 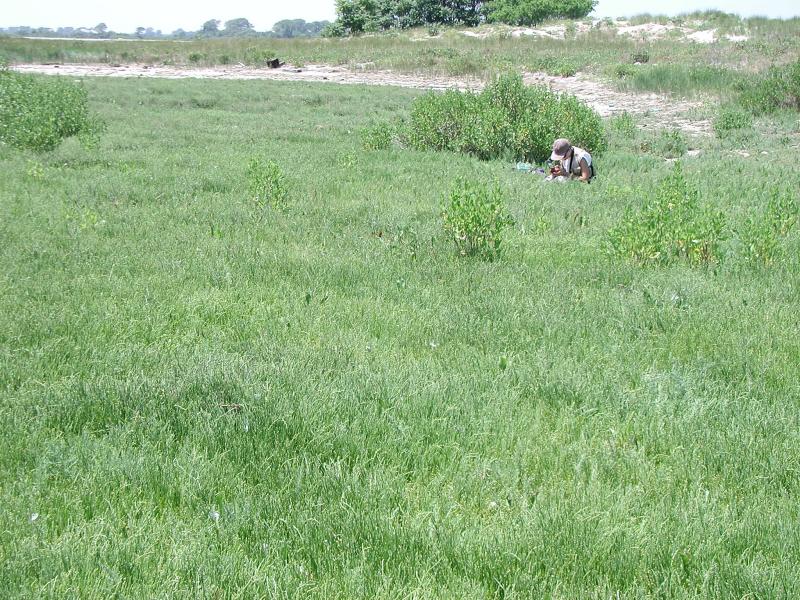 This figure helps visualize the structure and "look" or "feel" of a typical Salt Panne. Each bar represents the amount of "coverage" for all the species growing at that height. Because layers overlap (shrubs may grow under trees, for example), the shaded regions can add up to more than 100%.