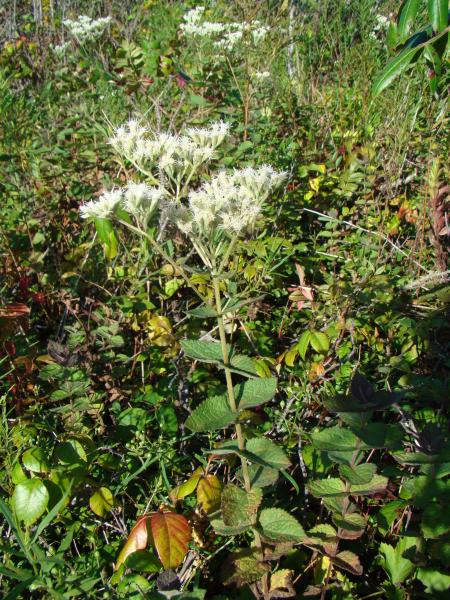 The species name rotundifolium is derived from the Latin "rotund" meaning "round" and "foli(um)" meaning "leaf." The genus name Eupatorium honors Mithridates VI of Pontus (132BC - 63BC), who was also known as Eupator Dionysius (Wikipedia contributors). Eupatorium rotundifolium contains eupatorin acetate, a guaianolide which may have anti-cancer properties, as well as eupachlorin acetate, a related compound which may also inhibit tumors (Wikipedia contributors).

There are five existing populations, but two of them have fewer than 10 plants. There is one other historical occurrence on Staten Island.

The larger populations seem stable, although one of them has not been revisited. There is no recent information on the smaller populations, so their trend is unknown.

Some plants occur near phragmites that may eventually encroach on the plants. The populations along roads and power lines are threatened by succession if their open habitat is not maintained, or they are directly impacted by maintenance machines.

This plant is currently known from Suffolk County on Long Island, with one historical collection from Staten Island and an unconfirmed report from Queens.

This herb grows throughout the Southeast from Florida to Texas, north to Southern Pennsylvania, and up through Long Island to Southern New England. It is rare only in New York and Pennsylvania.

Eupatorium rotundifolium var. ovatum is a perennial herb, 40 to 100+ cm tall. The stems grow singly from rhizomes, are sparsely branched distally, and have tiny hairs. The leaves are sessile or nearly so, mostly opposite (distal sometimes alternate, lateral buds dormant or producing 1 pair of leaves) 3 to 6.0 cm wide and 1 to 2 times as long . The leaf blades are 3-nerved, deltate to orbiculate and broadest near the middle, with wedge-shaped bases, pointed tips and serrate margins, and are hairy and dotted with glands. The infloresence is of discoid flowers only, arranged into corymbiform (flat or round-topped) heads of 5 florets each, the corollas are white and 3-4 mm long, and the calices form pappi of 30-40 bristles 4 to 4.5 mm long. There are 8-10 phyllaries (involucral bracts) in 2 to 3 rows, each 2 to 6 mm long with acute tips, and pubescent and gland-dotted on their outer (abaxial) sides.

Flowers or fruit with leaves and entire stems are needed for identification of this species.

The time of year you would expect to find Hairy Thoroughwort flowering and fruiting in New York. 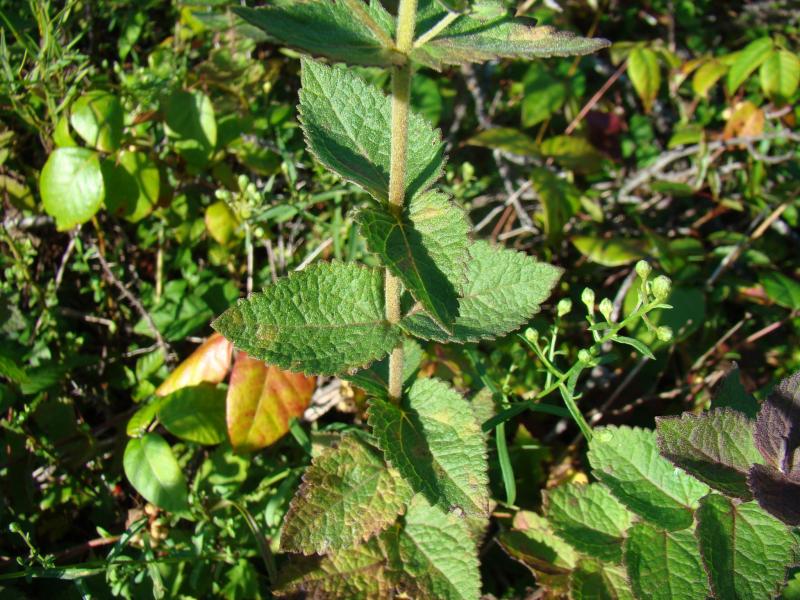 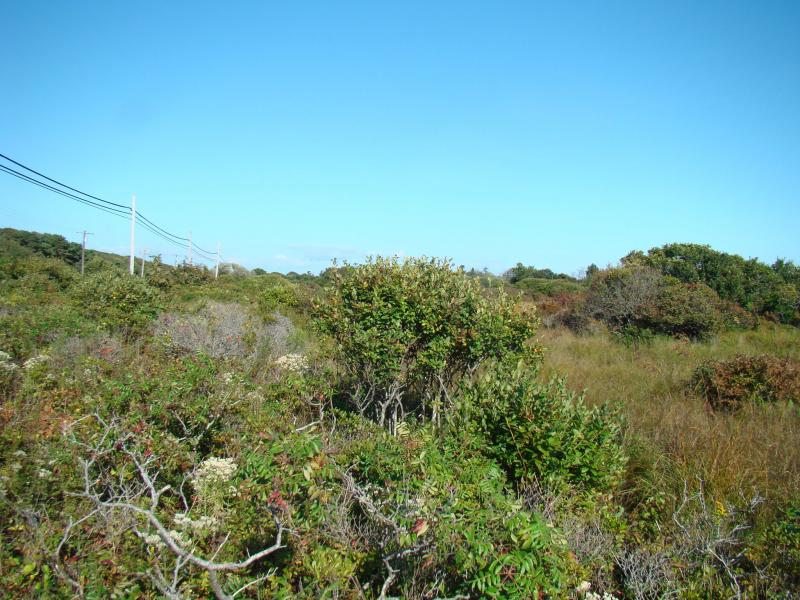